Footage of Carrie Fisher shot for ‘Star Wars: The Force Awakens’ to be used 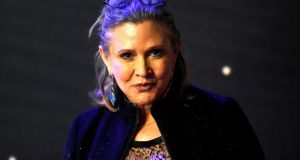 Carrie Fisher at the European premiere of Star Wars, The Force Awakens in Leicester Square, London, in 2015. Photograph: Paul Hackett/Reuters

The most recent Star Wars film – the prequel Solo: A Star Wars Story – might’ve left a disturbing lack of faith among its dedicated fan base, leading to worries about the future of the franchise. But Disney has announced that filming will begin next week in London on the coming instalment, currently titled Star Wars: Episode IX, and that Carrie Fisher will reprise her role as Leia Organa, using footage shot for Star Wars: The Force Awakens (2015).

Fisher died in 2016 after a heart attack. A younger version of Leia had been shown in hologram form in the prequel film Rogue One, leading some fans to speculate that the Leia in Episode IX might also be a hologram, or a computer-generated version.

“We desperately loved Carrie Fisher,” JJ Abrams, who is directing the film, said. “Finding a truly satisfying conclusion to the Skywalker saga without her eluded us. We were never going to recast, or use a CG character. With the support and blessing from her daughter, Billie, we have found a way to honour Carrie’s legacy and role as Leia in Episode IX by using unseen footage we shot together in Episode VII.”

Using film originally recorded for a previous episode is not unheard of in Star Wars. In Rogue One, the director, Gareth Edwards, spliced in footage of two Rebel Alliance pilots seen in A New Hope, (Red Leader and Gold Leader, played in the original by Drewe Henley and Angus MacInnes).

Billy Dee Williams, last seen in the Star Wars franchise in Return of the Jedi, is also confirmed to reprise his role as Lando Calrissian, the smooth-talking former smuggler who used to own the starship Millennium Falcon. Mark Hamill will also return as Luke Skywalker, although it is unclear how he will figure into the plot (spoiler alert), given the ending of Star Wars: The Last Jedi, the eighth film in the original nine-movie sequence.

The film is set for release in December 2019. – New York Times