Review: The most family-friendly and proudly silly of all the monster dynasties 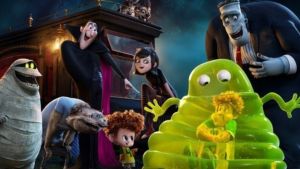 By the time you read this, this third instalment of this monstrously successful trilogy will be tipping the franchise toward the $1 billion mark; not bad for a film where the best joke is: “He’s the mummy but you’re the one in De Nile.”

The animated Dracula (Sandler) and his half-human daughter Mavis (Gomez) have, over two earlier movies and four prequel series, been joined by Mavis’s werewolf husband, Johnny (Sandberg), and their son, Dennis, but the father-daughter relationship remains the sappy heart of the sequence.

As the third film opens, Dracula is lonely and entirely unable to work the supernatural version of Tinder on his phone. Suspecting he is overworked at the titular family resort, his daughter, Mavis, arranges a cruise vacation for dad and all the family and friends. On board he falls for the ship’s captain, Ericka (Kathryn Hahn), who, unbeknown to him, is the vengeful granddaughter of Van Helsing.

The animation is certainly not on a par with director Genndy Tartakovsky’s best work (Samurai Jack, Sym-Bionic Titan) but Summer Vacation does have more fun with toons than previous Hotel Transylvania films. An opening sequence sees a 19th-century Dracula and chums fending off arch-nemesis Van Helsing in Wile E Coyote style. An enormous puppy named Bob and a blob named Blobby (a wobbly, sliding jelly who can hiccup miniature versions of itself and various jelly-based items) get most of the laughs. A final showdown at the lost city of Atlantis is impressively large in scale.

Vampirologists may quibble about Dracula and his father, Vlad (Mel Brooks), crossing water and sunbathing without a care in the world, but the film is, for better or worse, every bit as good as its predecessors. Darker references – the Bermuda Triangle, the Chupacabra, and a cruise ship that looks like the Titanic – are swiftly brushed aside so that all-age shenanigans can resume. Even watched beside various incarnations of the Addams and the Munsters, this remains the most family-friendly and proudly silly of all the monster dynasties.

The real Sound of Music: Maria was no ‘flibbertigibbet’ and she didn’t teach the kids songs
8