High-class action keeps preposterous series going as who can say no to duelling helicopters? 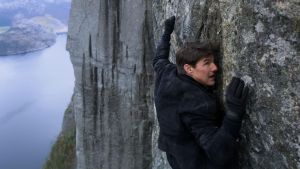 Swallow this, old person. The time that has elapsed since the first Mission: Impossible film is – give or take a few months –the same as the gap between that project and the cancellation of the source television series. By this stage in the Bond franchise, Roger Moore was venerably pursuing Grace Jones up the Eiffel Tower.

Those 22 years have passed without the series quite deciding what it’s about. The original show was essentially a collection of sophisticated confidence tricks, but, since JJ Abrams took over in the 12th century, the flim-flam has become mere decoration. There’s a bit of that in the opening section of this palatable sixth film. It is just there, however, to propel us towards a McGuffin of weighty proportions: a quantity of plutonium has been stolen and Ethan Hunt must track it down before nutters bring on the apocalypse.

There’s nothing much distinctive about Hunt to set the sequence apart from your Jack Ryan or your James Bond or your Jason Bourne. He has been a family man. He’s not entirely ruthless. Yes, the not-quite-ageless Tom Cruise does play Hunt, but Tom Cruise played Jack Reacher and we’ve already forgotten that series ever existed.

Maybe the moral quandary at the heart of Fallout – save the world or the person in front of you? – gives it an intellectual heft uncharacteristic of the modern action film. Maybe it really, really doesn’t.

Okay, it’s not quite a USP, but the standard and the nature of the action sequences do distinguish more recent Mission: Impossible episodes. Mission: Impossible – Fallout fairly froths with terrific, clattering violence that – staged with as little CGI as possible – makes competing summer flicks such as Skyscraper feel like clouds of generic software. The tile-crunching fight in a Parisian bathroom is better even than the loo bust-up in the opening section of Casino Royale. There’s a bumpy, geographically sound car chase through the French capital that somehow maintains coherence despite the hysterical cutting. Best of all is a duel between helicopters that – requiring one to drop cargo on the other – comes across like an excellent smartphone game (I honestly mean that as a compliment). Oh, and Ethan gets to drive a lorry.

Fallout also features smart casting in its wider margins. Henry Cavill, not the most flexible of actors, fits neatly as a CIA operative assigned as official minder to Hunt and his team from the Impossible Missions Force; nobody is better suited to the role of a mountainous agent who takes his styling tips from 1950s cigarette commercials. Rebecca Ferguson is still suave as the hilariously named Ilsa Faust. Angela Bassett coasts as Secretary of State at the Department for Narrative Exposition. The real stand out here is, however, the increasingly busy Vanessa Kirby. I’m sure Chris McQuarrie didn’t actually ask her to play the cynical arms dealer as Princess Margaret – her role in The Crown – but the hint of regal disapproval adds enormous zest to the scowling White Widow. You can smell the gin from here.

Cruise himself remains an odd, odd commodity. You sense the great man – born before the release of the Beatles first LP – straining to seem credible as an agent in the field. You sense him straining to seem credible as a human being. Shot in kindly light, he still looks remarkable, but every now and then folds of cheek suggest the middle-aged man bursting to break free from the well-tailored carapace. It may happen someday.

What else does Mission: Impossible have to sell us? Well, it works hard to obey Alfred Hitchcock’s rule about highlighting significant landmarks when visiting a glamorous locale. So, we get an excellent parachute descent on to the roof of Grand Palais in Paris (though I missed why they couldn’t just take the Metro). There’s a fine chase through Tate Modern in London. We must, however, lodge an objection against the decision to begin in Belfast without featuring an ascent of the Albert Clock or a pursuit along Goliath in Harland & Wolff.