New this weekend: Neil Jordan's Greta and Mel Gibson in Dragged Across Concrete 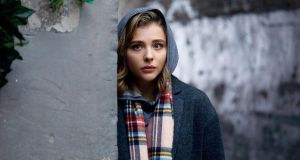 GRETA ★★★★☆
Directed by Neil Jordan. Starring Isabelle Huppert, Chloë Grace Moretz, Maika Monroe, Colm Feore, Stephen Rea
Frances (Moretz), an earnest young woman who works at a snooty New York restaurant, finds a handbag and immediately sets about returning it to its owner. The bag belongs to an older woman, Greta (Huppert), who invites Frances in for tea at her cosy little home. One upended table later and Frances has a diabolical lady stalker on her tail. The camp carrying on and mostly female cast provide a hyper-meta-commentary on 1990s stalker films of old, particularly the girlishly energised Single White Female, Poison Ivy and The Hand That Rocks the Cradle. A compellingly weird fairytale. 15A cert, gen release, 99 min Full review TB

This grindcore cops-and-robbers variation has downtime in the downtime. Forget fast cuts: every Ritalin shot is medium-close, still and hideously coloured with snot green, blaring red, or puked mustard interiors and filters. “Being branded a racist in today’s public forum is like being branded a communist in the 1950s,” Don Johnson’s police sergeant scolds Mel Gibson. The racial politics of Dragged Across Concrete are nothing if not provocative. Arriving after the brilliant Bone Tomahawk and Brawl in Cell Block 99, it’s hard not to feel a little disappointed by Zahler’s third wayward meta-anti-film, even if it does reaffirm the writer-director as the most imaginative creator-of-worlds in the business. 18 cert, gen release, 158 min Full review TB

Kerry’s own Jessie Buckley plays a Glaswegian ex-con who dreams of making it to Nashville. Some films build themselves so determinedly around a central performance that you can’t imagine them existing without their star. Buckley triumphs in all areas: she can do comedy; she can do sass; she can sing. She and a fine supporting cast are so strong that the film’s missteps (an awkward subplot involving posh Okonedo, a silly celebrity cameo) are easily overlooked. A literal crowd-pleaser. It will greatly please crowds. 15A cert, gen release, 100 min Full review DC

Kids hang, get up to no good, and ask wildly inappropriate questions ( “Would you rape your parents if you had to?”, “Don’t thank me; that’s gay”) in mid90s, Jonah Hill’s promising debut as a writer-director. Stevie (The Killing of a Sacred Deer’s Suljic) is a 13-year-old in 1990s LA who falls in with the older, cooler kids he meets at a skate shop. Hill’s clever, observational dialogue flags how arbitrary teen social standing can be. For all their chilling, the shifting group dynamics between the charismatic Ray (Smith), the sweary Fuckshit (Prenatt), and Ruben (Galicia) – as filmed by Fourth Grade (McLaughlin) – crackle and seeth. Drugs are taken. Heads are cracked. House parties are low-key wild. Super Nintendo controllers are used inappropriately. 16 cert, gen release, 85 min Full review TB

Dr Louis Creed (Clarke) and his family, including winsome daughter Elle (Laurence) relocate to a small town in Maine amd into a home that backs onto ancient tribal lands where the barrier between life and death is permeable. The family are soon plagued by horrible visions. And that’s before Louis and kindly neighbour (Lithgow) decide that they’d rather not tell Ellie that her beloved cat has been killed on the dangerous Chekovian road out front, opting instead for the titular graveyard that brings animals back as evil shadows of themselves. This superior horror often resembles Mary Lambert’s 1989 adaptation, but it has more than a few nasty surprises. 16 cert, gen release, 101 min Full review TB

Daredevil explorere Sir Lionel Frost (Jackman) longs to be recognised for his feats but has, thus far, failed to impress the snoots at the club. When an expedition to photograph the Loch Ness monster goes wrong, Sir Lionel heads westwards in search of Bigfoot. When he finally meets the lonely sasquatch (Galifianakis), he hatches a plan to travel to Shangri-La, where, in theory, the loveable creature can finally be among his own kind. Director Butler, cowriter of Kubo and the Two Strings and codirector of ParaNorman, has fun with British colonialism. A vertiginous sequence on an ice-bridge is as nail-biting than any live action (or CGI) scene you care to mention. There are good jokes, a playful sensibility, and a genuine sense of jeopardy. PG cert, gen release, 94 min Full review TB

Other ★★★★☆ films out and about: At Eternity’s Gate, How to Train Your Dragon: The Hidden World, The Man Who Wanted to Fly, Us, The White Crow

‘Jennifer Aniston cried in my lap’: the inside story of Friends
7

This Mournable Body: The horror of simply being alive
Real news has value SUBSCRIBE