Review: A whip-smart portrait of dazed and confused teens navigating the 1990s 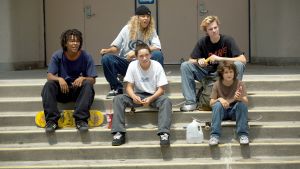 Kids hang, get up to no good, and ask wildly inappropriate questions (“Can black people get sunburned?”; “Would you rape your parents if you had to?”; “Don’t thank me; that’s gay.”) in Jonah Hill’s promising debut as a writer-director.

Stevie (The Killing of a Sacred Deer’s Suljic) is a 13-year-old in 1990s-era LA who falls in with the older, cooler kids that he meets at a Motor Avenue skate shop.

Hill’s clever, observational dialogue flags how arbitrary teenage social standing can be. For all their chilling, the shifting group dynamics between the charismatic Ray (Na-kel Smith), the sweary Fuckshit (Olan Prenatt), and Ruben (Gio Galicia) – as filmed by Fourth Grade (Ryder McLaughlin) – crackle and seeth.

Stevie’s home life, with a frequently absent mom (Waterston) and a thuggish older brother (Hedges, nuanced even while playing a bully), is equally dramatic. Harmony Korine cameos as one of mom’s sexual partners, but you can feel the influence of Korine’s Gummo and Kids long before he appears on screen. The hazy (and sometimes hazing) summer antics of Richard Linklater’s Dazed and Confused provide another touchstone, as does Kevin Smith’s similarly profane Clerks. Director Kelly Reichardt’s regular cinematographer, Christopher Blauvelt, brings a handmade, freewheeling aesthetic.

Suljic is by turns boyish, cocksure, adventurous, freaked out, unsure of himself and dumb as a rock

Period details (CD Walkman, Ninja Turtles duvet) are welcome and not overused. An original score by Trent Reznor and Atticus Ross is complemented by contemporaneous sounds from Pixies, Morrissey, Souls of Mischief and Nirvana.

Suljic, like his newfound crew, is by turns boyish, cocksure, adventurous, freaked out, unsure of himself and dumb as a rock. It’s a terrific interpretation of a cleverly constructed, superior coming-of-age narrative.