Secret in Their Eyes review: not quite peculiar enough to be interesting

Chiwetel Ejiofor and Julia Roberts ably deliver in a detective film with a dark twist, but the whiff of compromise (and Nicole Kidman's face) hangs heavy over this remake 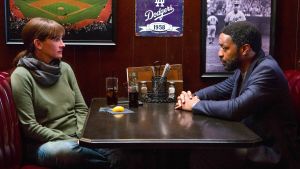 Film Title: Secret in Their Eyes

Somehow or other, Juan José Campanella’s The Secret in Their Eyes, an entertaining pot-boiler from Argentina, beat both The White Ribbon and A Prophet to the best foreign language picture Oscar in 2009. A terrible American remake was inevitable and, well, this looks very much like the beast we feared. The original picture’s melodramatic excesses have been augmented with fresh indulgences to deliver a film that is not quite peculiar enough to be interesting.

Now stripped of its definite article, Secret in their Eyes splits its story between the present and the months after 9/11. In the earlier section, Ray Kasten (Chiwetel Ejiofor), an FBI counter-terrorism specialist, is summoned to a crime scene near a mosque. He discovers the body of young woman in a dumpster. Ray rocks back in horror. It is the daughter of his colleague Officer Jess Cobb (Julia Roberts).

With the occasional assistance of Claire Sloan (Nicole Kidman), new to the DA’s office, Ray attempts to track down the suspect, a potential informant, but meets resistance from his bosses. They are more concerned with averting further attacks than arresting an everyday murderer.

The reference to early noughties paranoia is not entirely gratuitous. Billy Ray, who has adapted and directed Campanella’s film, needed some equivalent for the totalitarian Argentina of the 1970s. Unfortunately, he can’t quite sell the notion that post- Patriot Act law enforcement shared so much in common with the activities of a fascist junta.

Something stranger still is going on in the aging department. In the present, Ejiofor (who is excellent throughout) wears fetching grey at his temples, and the ruined Roberts (also very good) mopes about with no-make-up make-up.

Meanwhile, Kidman appears to have allowed no alteration whatsoever to her already uncannily Saharan face. Aside from being plain ludicrous, the decision causes come confusion when we cut from the past to Claire in the present day. Maybe that was Tuesday. Now, it’s Wednesday and she has added a different flick to her hair.

Now that’s whinged about, the film, like its predecessor, moves with satisfying momentum towards a dark twist that feels entirely fair and honest. The bravura shot swooping into a sports stadium is lifted directly from the original film, but is welcome nonetheless.

Working with cinematographer Danny Moder, Ray arranges his actors in elegant tableaux that ease some of the film’s more ludicrous turns. (The less said about Kidman’s character’s aggressive interrogation of the prime suspect, the soonest banished to the dungeon of cinematic embarrassment.)

Secret in Their Eyes doesn’t really come off. Sound work by Roberts, Ejiofor and Dean Norris can’t quite shake the whiff of compromise that hangs around the project.

It is, however, nice that somebody bothered to release a detective picture into cinemas. Such things have now become almost as rare as westerns these days. The film bombed on domestic release. So I wouldn’t expect to see many more in the near future.

Indecisiveness led to home of The O’Rahilly being demolished
10