Roy Andersson: “You can look at us with humour or fear. But we are all vulnerable”

With only five features in 45 years, this iconoclastic Swede director of ‘A Pigeon Sat on a Branch Reflecting on Existence’ is willing to wait to make movies his way – no matter whose feathers get ruffled 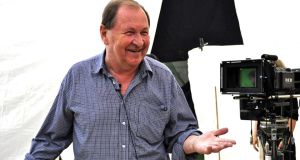 A man keels over in a cafeteria having just paid for his meal. There’s nothing to be done for the unfortunate fellow, so the woman at the till offers his purchases to other customers. A hand slowly raises and a taker emerges to grab a beer from the tray and scuttle back to his seat.

Elsewhere, ageing siblings squabble over their dying mother’s handbag, but she refuses to let go over her valuables. And 18th-century Swedish monarch Charles XII stops off in a diner en route to a ruinous Russian campaign.

Welcome to the curveball- comic, panoramic milieu of director Roy Andersson, a film-maker once described by Lars von Trier as the only competitor he truly fears.

“I am interested in humans,” says Andersson. “You can look at us with humour or fear. But we are all vulnerable.”

Never mind the Avengers: there’ll be another Marvel Comics film along in a minute or so. If it is event cinema you’re after, we suggest you look no further than A Pigeon Sat on a Branch Reflecting on Existence, the fifth film from the Swedish auteur since 1970, and the final instalment in a drolly funny trilogy comprising Songs from the Second Floor (2000) and You, the Living (2007).

The new film, which brought home the Golden Lion from Venice last year, takes cues from the 1565 painting The Hunters in the Snow by Bruegel the Elder.

Birds on the brain

“It made me curious,” says Andersson. “There are two birds – not pigeons but crows. And they are watching the villagers. It is like they are wondering what the humans are doing below. And when I was working on the script I was sitting on a first floor looking out the window at a pigeon on a branch. And I got to wondering if he was having trouble with a script also.”

In 1969, the Gothenburg-born Andersson made a most auspicious debut with A Swedish Love Story, a film that wore proud influences from the contemporaneous Czech New Wave. It was a huge hit. But not everybody was impressed with the new Marxist firebrand on the block.

Ingmar Bergman was an inspector at the Swedish Film Institute where Andersson studied.

“He was very, very angry with me,” recalls Andersson. “Because I belonged to a group that wanted to make left-wing movies. Bergman was very right- wing. He was close to being a Nazi. He came from a very conservative background. He was the son of a bishop. He promised that if I continued to make the films I was making that I would never ever have the possibility of making a feature in the future.”

“Swedish Love Story was a big success in Sweden,” he says. “But my second film was a big, big, big flop. Economically, critically it failed. And I was out in the cold. The only people who called me where from commercials.”

And so, Andersson drifted into advertising. An odd fate for a Marxist, surely?

Andersson laughs. “People used to ask me that all the time. Especially during the late 1960s. People ask, how can you make commercials? But I do not think society is possible without a market. The problem is that we must be responsible with the market. We have to take that responsibility very carefully. We are moving to a point where other humans are not seen as humans but as clients. I have avoided making commercials that are not morally acceptable.”

By the time Andersson returned to feature film-making, he had honed his craft and style. The ensuing trilogy – mostly composed of vignettes – has been remarkably consistent. Absurdist, painted in muted colours, with minimal camera movement, populated by (mostly non-professional) people who are plucked from the streets, one couldn’t mistake A Pigeon Sat on a Branch for a film by anyone else.

“I think my colour scheme goes back to the 1950s, when I was growing up,” he says. “That’s how I remember it. As grey and green and yellow. But I also want a kind of timelessness. I want the cast to be universal. To be representative for anyone who is watching the film.”

I wonder, though, what the primary organisation factor is in a film that juxtaposes morose joke-shop salesmen with a woman cooing at her baby in the park?

“Life. Life is inexhaustible. There are unlimited ideas. And a feeling that is increasing with me. What people do to each other. How can we atone for what we have done to other people throughout history?”