The film rights were sold before the first book ever saw print. On the eve of the Irish release of Divergent, we meet superstar YA author Veronica Roth, who shows she’s pretty damned Dauntless herself 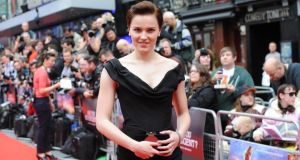 There are a few stars associated with this week’s dystopian fantasy Divergent. Kate Winslet plays the leader of one sinister contingent. The unstoppable Shailene Woodley is the plucky heroine. British heartthrob Theo Jones essays the delicious male lead. But one could, without stretching too much, argue that young Veronica Roth is the person to keep an eye on.

In the lucrative world of young adult fiction, Ms Roth counts as a proper superstar author. The trilogy that inspired the films (Divergent, Insurgent and Allegiant) have sold in the millions and inspired the sort of obsessive following that attended predecessors such as Twilight and The Hunger Games. As a result, Roth is now bombarded daily by digitally delivered advice, admonition and idolatry. One wonders how she copes.

“The upside is hearing people’s enthusiasm,” she says. “The down is hearing the opposite. When the third book came out, a lot of people didn’t like it and they decided to tell me in the harshest way imaginable. I then have to take a break. But I grew up being on the internet. It was very natural for me. It would be unnatural to not be online.”

Oh, Lord. She’s right, of course. Still only 25, Roth is more or less the same age as the internet. Whereas old jerks such as your correspondent feel nostalgic for Fawlty Towers and early Buzzcocks records, Veronica gets similar Proustian rushes when hearing the sound of an old-school dial-up modem. “Oh yeah. I was an early AOL customer. I still hear that sound in my head. Ha ha!”

Perfectly primped and manicured, enormously tall, polite in the way only Americans can manage, Roth looks not unlike a more enormous version of Woodley in the film (or should that be the other way round). She’s never known life as a struggling writer.

Born in New York and raised largely on the outskirts of Chicago, Roth came up with the idea for Divergent while still in college. It sounds as if the publishers had various sorts of conniptions when they encountered the series’ high-concept: a dystopian, post-apocalyptic world where citizens are, according to supposed character traits, dragooned into initially harmonious, eventually disputatious, factions.

“When it was a hobby I would move from one thing onto the next whenever I got bored,” she remembers. “It became a job very quickly when I sold the book to a publisher in senior year at college. Then everything happened very fast. I went from doing this for fun and then I was being paid. It’s been a whirlwind. What do I do for fun, now? I have to find a hobby. Ha ha!”

The story goes that Roth sold the film rights even before the book was on the shelves. No analogies with “whirlwinds” does this story justice. She was already a phenomenon before any reader had cracked the spine (or, more likely, accessed the relevant file on a Kindle).

A little bit of maths will help us out here. Divergent emerged in 2011, just two years after the first novel in Suzanne Collins’s Hunger Games trilogy. Divergent is very much its own beast: a clever, zippy analysis of teenage exclusion and rebellion. But there can be little doubt that the marketing folk smeled the “next Hunger Games” (which was, in its time, “the next Twilight”). That sort of thinking must be simultaneously flattering and infuriating.

“Yes, it is a mixture of both,” Roth agrees. “It helped people find the book. That was useful. There are enough things in common that make it a useful comparison. But you can’t set people up to expect that to continue. They are very different.”

So we know what happens in these books. But what are they really about? In the opening chapters of Divergent, it is revealed that Tris Prior, the heroine, does not fit into any of the society’s neat factions: Erudite, Dauntless, Candour, Abnegation or Amity. She is “divergent”. Can we assume that Roth is taking a shot at our own society’s continuing need to pigeonhole citizens?

“Well, I think some of the inspiration came from a psychological treatment called exposure therapy. When I built the rest of the world, I was examining myself, I think. I have a tendency to categorise people to make them easy to understand. But I find that problematic. You don’t know people. You reduce them. People really aren’t that easy to summarise.”

Roth seems to be handling all this acclaim with admirable stability. Of German and Polish descent, she recently married photographer Nelson Fitch and they now live in the environs of her beloved Chicago (a key location in the books and the film). A quarter of a million readers follow her on Twitter. Signings are packed with desperate fans. I wonder if she can remember when it became clear that she had created a sensation.

“That really is hard to say,” she says. “It kept changing over time. When the book was released, it hit the New York Times bestseller list. At that point I knew it was doing all right. But I didn’t know it would be such a big deal. Then when the second one came out I started to get a lot of pre-orders. That really changed things.”

Roth isn’t quite sure what comes next. She says she takes the spaghetti approach with her experiments in writing: “Throw it at the wall and see what sticks.” Can she really be so relaxed about this surge of success? Perhaps we can look to the books for clues to any inner turmoil. From what she said earlier, it seems safe to assume that Tris is a version of Veronica.

“Not so much actually,” she says. “Her struggles do involve things that I think about. But we often come to very different conclusions. I am not nearly so tough. And I think I am a little nicer than her. I am a little more easygoing.”

I wouldn’t argue with that.

Women of honour: The godmothers of the Italian mafia