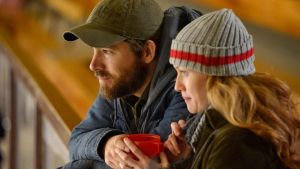 Ryan Reynolds and Mireille Enos in The Captive

It’s been a strange trip for Atom Egoyan. Over the last decade, the Canadian director, best known for Felicia’s Journey and The Sweet Hereafter, has been testing the patience of his fans with a series of pictures that veered from the unstable to the positively barmy. His latest film, playing in the main competition, is very much in the latter camp. A careering thriller concerning child abduction and internet pornography, The Captive is entertaining in a ramshackle fashion – like a Brian De Palma film with a community college degree – but nobody is likely to confuse it with a return to form.

Egoyan’s compatriot Ryan Reynolds plays an ordinary man driven to despair when his daughter goes missing from the back of his van. His wife (Mireille Enos) ends up leaving him. The police officers assigned to the case have suspicions that he might be involved. Meanwhile, his landscaping business is tottering on the edge of bankruptcy.

Jumbling up the timeline to occasionally confusing effect, the film has already revealed that a slim, sinister maniac has abducted the girl with a mind to exploiting her for paedophiliac websites. Years later, she is being forced to record videos aimed at luring other girls into his web.

The picture is slightly tasteless in its glamorisation of this sordid enterprise. Kevin Durand plays the captor as a slim Machiavellian mastermind who only needs a cigarette holder to attain full Bond-villain status. Somehow or other, he has placed cameras in the homes of virtually every opposing character. He doesn’t really live in an undersea lair with a giant killer squid, but that is surely his ultimate ambition. Anybody hoping for the grubby banality of evil had best look elsewhere.

For all the silliness and inappropriateness, the film does have enough forward momentum to keep boredom and irritation at bay. Rosario Dawson is convincingly furrowed as the police officer assigned to the case, and Reynolds’s inherent likability scares up sympathy for his troubled character. Egoyan has seen enough Hitchcock to know which cards to keep close to the chest and which to play early.

This is, however, a bafflingly uneven picture that can’t seem to decide whether it wants to embrace pulp or engage with loftier matters. The search for the Atom Egoyan we used to know continues.