Record number of female protagonists in hit films in 2016 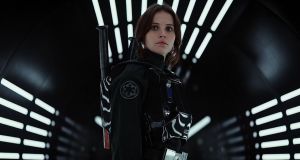 The number of female protagonists in hit films was at an all-time high in 2016, according to a new study.

The Centre for the Study of Women in Television and Film found that women led 29 per cent of the top 100 grossing films of the year, which was up 7 per cent from the year before and represents a new record.

Female-fronted films such as Arrival, Rogue One: A Star Wars Story, Bad Moms and Ghostbusters were notable examples of female-led blockbusters, but the year also saw a rise in the number of women appearing within ensemble casts.

A reported 37 per cent of films included major female characters, which is up 3 per cent from 2015 and another all-time high.

“We have now seen over and over and over that female characters, when done well, they’re good box office,” said Martha Lauzen, who authored the study.

Following in the footsteps of the female-fronted Star Wars franchise relaunch The Force Awakens, Rogue One, which starred Felicity Jones, was also a big hit, making millions at the worldwide box office.

The year also saw a number of sleeper hits, such as Bad Moms, which made $179 million (about €170 million) worldwide from a $20 million budget. A sequel is now on the way.

However, the study found that women are still more likely to be seen in comedies, followed by drama, horror, animation and and sci-fi.

“It is possible that this is something of a quirk that we will not see repeated in the future,” Ms Lauzen said.

“It is also possible that introducing female protagonists is somehow an easier, less threatening fix than hiring women directors and writers.”

The findings follow a damning report from the US Equal Employment Opportunity Commission that found that studios are guilty of discriminating against female directors.

This year has already shown that women can open movies, with Nasa drama Hidden Figures making $165 million at the global box office.

2017 will also see female-fronted blockbusters such as Wonder Woman, Beauty and the Beast, Alien: Covenant and Star Wars: The Last Jedi.