OZ the Great and the Powerful 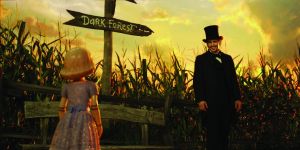 James Franco in Oz the Great and Powerful

OZ THE GREAT AND POWERFUL

Nobody at Walt Disney would dare deny that this film only exists because of the puzzling success of the same studio’s Alice in Wonderland in 2010. Also released during the pre-spring penumbra, Tim Burton’s picture is one of only 15 to take $1 billion at the world’s box office.

After a sequel to Lewis Carroll’s great puzzle, we now get a prequel to L Frank Baum’s The Wizard of Oz (and a tribute to the definitive 1939 adaptation). The trailers are similar. The posters deal in the same airbrushed gothic. Are we looking at Alice Reloaded ?

Not so much. Though the storyis a tad uneven and the dialogue rarely takes flight, Oz the Great and Powerful proves to be a superior film in virtually every regard.

We should have expected little else from Sam Raimi. Since his emergence with The Evil Dead through his confident stewardship of the Spider-Man films to the brilliant nonsense of Drag Me to Hell, Raimi has kept hold of his irreverent sense of mischief. Telling the story of the faux wizard’s journey to stewardship of Oz, the new film somehow manages to be eye-wateringly vast and endlessly light on its feet. How refreshing it is to enjoy something we never knew we wanted.

The new picture is most notable for its skilful – and only occasionally arch – pastiche of the 1939 film’s camp visual sweep. We begin, as before, in a monochrome version of Kansas. A dab hand at oily sleazeballs, James Franco, all smirks and lopsided smiles, plays Oz, a slippery magician in a turn- of-the-century circus. We see him chatting up the shills, disappointing a girl in a wheelchair and enduring the fury of a cuckolded strongman.

Following further confusions, Oz finds himself caught up in a twister and spirited away to a largely computer-generated version of Baum’s magical kingdom. If you live within the catchment area of an Imax cinema, then it is worth availing of that technology.

The sudden shift from narrow Academy ratio to football-field screen is dazzling. The transformation from black and white also helps highlight the impressive lusciousness of cinematographer Peter Deming’s delicious allusions to pre-war Technicolor: the primary colours are startlingly bold; artificiality is at a tasty premium.

One does sense the writers struggling to make sense of their slightly garbled origin story. Arriving in a blaze of red, like an outtake from a giant Michael Powell film, Mila Kunis plays Theodora, the most divided among a trio of fabulous witches. Michelle Williams is luminous as the perennially saintly Glinda. Rachel Weisz is blissfully catty as the supernaturally spiteful Evanora.

It transpires that, like Monty Python’s Brian, this Oz meets the description of a saviour, long prophesied in myth, who will lead the magic kingdom to safety and prosperity. Oz’s sleepy eyes sparkle at the prospect of access to a hoard of gold. But dangers await him.

Raimi makes a good fist of deconstructing the earlier film without infringing that material still under copyright to MGM. There are no ruby slippers. Nobody ventures to suggest that there’s no place like home. But the atmosphere is more intoxicatingly redolent of high Hollywood camp than anything in Baz Luhrmann’s overstuffed entertainments.

Raimi also manages to work in a significant amount of his trademark comic horror: the flying baboons are properly nasty; carnivorous plants jump from the screen in a way that almost justifies the use of stupid 3D. There’s fine support from Zach Braff as a more cuddly flying primate and Joey King as a creepily Grimm china doll.

Yes, the picture feels a little like a cynical money-trap for the cinematic shoulder season. But Raimi really makes it fly. It’s all because (you knew something like this was coming) of the wonderful, wonderful things he does.