La La Land review: Romancing the Stone, as Gosling holds his own

In Damien Chazelle’s dazzling musical, Emma Stone sings and dances like a pro, Ryan Gosling a little less so, but the lack of sure-footedness only adds to the charm 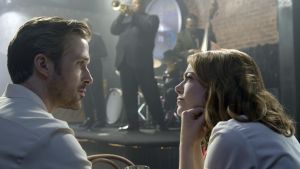 All that jazz: Ryan Gosling and Emma Stone in ‘La La Land’

Damien Chazelle directed Whiplash as a way of getting to make La La Land. He felt he had to prove himself with a more conventional project before attempting the sort of film people just don’t make any more. Handsome boy meets angular girl. Emotions surge in primary colours. They burst into song. They glide across the floor. Ultimately, they leave earth and obscure the stars. You can understand why investors might have been wary. On paper, the film sounds like nothing so much as Francis Ford Coppola’s financially ruinous One From the Heart.

Mounted on a smaller scale than the undervalued Coppola picture, La La Land ravishes from densely populated beginning to eye-moistening denouement. It swells with the indulgence and the daring of youth. As in Whiplash, the male lead does quite enough jazz-splaining to his nodding girlfriend. The form is more intoxicating than the substance. Those imperfections take little away from a project that understands the pleasures of awkwardness.

The puzzle of La La Land is that, sold as something quite different, it will strike fans of certain 1960s entertainments as very much the same. We begin with an exuberant sequence, filmed in one take, of a traffic jam on a baked Los Angeles freeway. Kicking memories of similar tailbacks in Godard’s Weekend and Fellini’s 8 ½ aside, the drivers leap from their cars and sing along to the ironically exuberant Another Day of Sun.

The frayed tempers cause Mia (Emma Stone), an actor working as a barista at a studio lot, to engage in mild road rage with Sebastian (Ryan Gosling), a jazz pianist. We’ve seen the posters. So we know this meet angry will soon lead to a cuter meet and a period of close snuggling. Sebastian yearns to set up a club that will play “real jazz”. Mia writes a one-woman show as a way of forwarding her career.

Somewhere in its mildly sluggish middle, the film puts forward a dilemma about contemporary jazz music. Sebastian signs on for a tour with a fusion band called The Messengers (their slick sound could hardly sound less like Art Blakey’s Jazz Messengers if they played only kazoos) headed by charming, suave Keith (John Legend). Keith suggests that jazz will wither if it fails to bend to the times. Sebastian remains a purist. The film allows both arguments some oxygen. The Messengers aren’t what Sebastian wants, but they still make an attractive noise.

As film-maker, Chazelle appears to side unambiguously with Sebastian. La La Land is immovably in the tradition of post-classical musicals pioneered by Jacques Demy in the 1960s. Just as bop music found new shapes for traditional jazz, Demy projects such as Les Parapluies de Cherbourg and Les Demoiselles de Rochefort re-imagined the Hollywood musical for a coming generation. A film like Todd Haynes’s Far from Heaven brought whole libraries of erudition to his variations on themes from Douglas Sirk.

In contrast, though Chazelle fires the film with individual enthusiasms – a love of LA’s clean architecture in particular – he brings almost no stylish innovations to the inherited form. Indeed, La La Land ends gorgeously with an incident drawn directly from one of the most famous scenes in Demy’s work.

The Frenchman often worked with actors who could sing a bit and dance a little, but would never have been able to earn a living doing either. Emma Stone has a sweet, fragile voice and a reasonably sure step. The puppyish Gosling is less confident with a tune, less purposeful in his hoofing, and he mimes jazz piano with only tolerable efficiency. No pretences are being made. That occasional uncertainty adds a humanity that succeeds differently to the godlike fluidity we adored in Cyd Charisse and Gene Kelly (a Demy collaborator). These are the film’s terms and it works within them.

If, as expected, La La Land, nicely scored by Justin Hurwitz, wins the best picture Oscar, it will be the first original film musical to do so since Gigi in 1958. Everything old becomes new again.

Alfre Woodard: ‘I love coming to Ireland, but we’re the pariahs now’
6

Mild-mannered he may be, but Matt Cooper will go 10 rounds with anyone
9

Academic freedom, boycott and the question of Palestine
Real news has value SUBSCRIBE