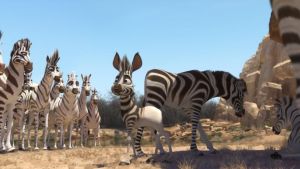 This South African animation is just too good. Hang on. We had better clarify. I mean “too” entirely literally and “just” in the sense of “by a narrow margin”. That’s to say, if it were a little worse then it might offer some mindless good fun. If it were somewhat better than, well, it would be somewhat better.

What we have here is a multi-pronged South African response to The Lion King, Madagascar and Disney’s The Jungle Book. Utilising some public money and trusting greatly in our good will, the animators have set out to make an adventure that pays proper respect to the continent from which those stories sprang. So there’s a little bit of ethnic music. The landscapes are rendered accurately. One rather feeble joke revolves around a herd of springboks who talk and behave like rugby players (get it?).

That aside, Khumba is entirely unremarkable. The story hangs around a zebra, born with stripes on just one half of his body, who, blamed for a continuing drought, journeys towards something that might be water. Along the way, he meets a crafty wild dog, a free-spirited wildebeest, a noisy ostrich, some sort of rabbit, a terrifying eagle, a mad sheep, Leon Trotsky, three Cossacks, Martin Boorman and the Dalai Lama. I may have made some of those up.

The array of comic characters is sufficiently vast and disordered to strain the powers of the most fanatical Thomas Pynchon fanatic. And we haven’t even mentioned Liam Neeson as a one-eyed leopard with a superstitious propensity towards partly striped zebras.

To be fair, the animation is of a higher standard that we expect from independent productions. But the voicework is standard-quirky, the story chaotic, and the song (just the one, weirdly) not bad enough to stick in the brain. It were only just a little worse . . . which is where we came in.