How culture can play into resistance 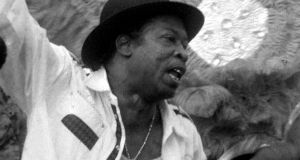 Down Claiborne charts the decline of Claiborne Avenue in the New Orleans district of Tremé after a six-lane overpass was constructed.

Tremé is the oldest black neighbourhood in America. Outside of the US, it’s famous for giving birth to the improvisational music style that would become known as jazz, and the brass band culture still so dominant in New Orleans, as well as the HBO television series by David Simon. Despite the historical, cultural and social richness and importance of the neighbourhood, one of its arteries, Claiborne Avenue, has long been overshadowed by an elevated highway.

Claiborne Avenue gave rise to an African-American business district during the Jim Crow era when racial segregation barred African-Americans from shopping at white-owned businesses. In 1969, a six-lane I-10 overpass was constructed, instigating the decline of businesses in the district, removing the famous oak trees that lined the avenue, and demolishing 500 homes in the area. Residents have since responded by painting murals on the columns of the overpass, documenting the cultural and social history of the neighbourhood.

It’s this brutal urban planning that forms the spine of a new film by the Irish experimental film-maker Moira Tierney. Down Claiborne is Dubliner Tierney’s 13th film, and at 50 minutes, her longest. Shooting primarily on Super 8mm film, many of her films are three minutes long, or stretch to five, seven, 10 or 15. Over the past decade, they’ve lengthened, such as the 20-minute-plus Collective Film (2010), Nouakchott Rocks (2010) and Bellefont 31 (2012).

Beyond – or rather beneath – the highway, Tierney’s film centres on the Mardi Gras Indians, groups of black “tribes” influenced by Native American tribes and costume, and features Big Chief Kevin Goodman, and Big Chief Demond Melancon of the Young Seminole Hunters.

These tribes, numbering about 40, spend months beading costumes by hand, before emerging on Mardi Gras Day, and upon meeting in the street have mock battles to decide which Big Chief is essentially the prettiest. The film is being shown at the Irish Film Institute (IFI) on November 7th.

Tierney studied in UCD, but spent most of her time in the university’s drama society. When she left college, she worked with a graphic design company, and then became involved in the Parade of Innocence protest involving artists, trade union activists and human rights campaigners focusing on the wrongful imprisonment of the Birmingham Six and the Guildford Four. She also worked in set design in theatre, and then production design in film at Ardmore Studios in Wicklow “for whatever feature was coming through”.

Tierney did a course at FilmBase and began working on short films, and then studied at art school in the suburbs of Paris, where her degree show featured Super 8 installations.

When Tierney left for New York, the Irish film-maker Pat Murphy told her she should check out the Anthology Film Archives in the East Village, a film archive and cinema founded by film-makers including the Lithuanian avant-garde film-maker Jonas Mekas.

Tierney says she,“fell in the door and Jonas was still working there, and there was a bunch of Lithuanians who had gravitated around him. It was amazing because the place was a little chaotic at the time, but it was full of people who were making films, playing music in the lobby all night, there was somebody who had a photo studio in the basement, and they were just really welcoming.

“They were doing open screenings as well, and I had a little tiny bit of Super 8 thinking ‘maybe I could show this at your open screening’. They were like ‘yeah, come on in!’ That was ’95, ’96. I ended up going in and out for a year, volunteering and shooting loads of Super 8, editing overnight in the editing booth, and showing at open screenings and also watching their amazing programme called the Essential Cinema programme.”

That programme included films by the Lumière Brothers, early Soviet films, early European avant-garde films and American avant-garde films. “The American avant-garde is really interesting, because they were reacting against big-budget Hollywood, so their whole premise was: ‘nah, all you need is a Super 8 camera and a little roll of film. In three minutes, you can make something beautiful, you don’t need a cast, you don’t need a crew, you don’t need these corny stories.’ It was really liberating, I think. The work I was seeing was amazing in terms of the possibilities of the medium. That was really mind-blowing, I have to say, really fundamental.”

While Tierney’s films are extraordinarily diverse in terms of their subject matter – Haitians in New York protesting police brutality, New Orleans Mardi Gras culture, young people living in Toulouse, the horse market at Smithfield in Dublin – there is a through line of “collective activities that happen outdoors”, Tierney explains.

“It might be political, perhaps, collective organising and the strength of that, and also I think how culture can play into resistance. In the case of New Orleans, a semi-colonial situation. With the case of the horse fair, they were being threatened by these new laws being brought in at the time. So I think I admire that, and I only film stuff I admire.”

Tierney also founded the Solus Collective with Alan Lambert in order to screen avant-garde film in Dublin and create connections with film-makers worldwide.

Her attachment to Super 8, since she first picked up a camera in a flea market in France, is somewhat rooted in its DIY nature, and how its simplicity and mobility allows a single film-maker to be somewhat self-sufficient. The feel of the Super 8 format has a magic in which even contemporary footage possess something of a time capsule element.

The format of film provides Tierney with a tool that digital video can’t replicate. “I love film. I love the colours, the texture. I like having to think about having to edit in camera while I’m shooting because I have a limited amount of film stock. I shoot silent, which I like. I think that helps me concentrate on the visual aspect a lot more. I think film is a gentler image.

“It’s easy for digital imagery to be quite harsh. I like the gentleness . . . I think a lot of digital cameras are designed to capture a very flat image, so they capture the maximum information to give you the possibility in colour correction to make all sorts of adjustments. But they can often look very bland as shot.”

The impact of avant-garde film-making is seen, Tierney says, “across the board. You see it in advertising, you see it in music videos.” But at a time of an abundance of footage driven by smartphones, the prophecy that everyone having film-making equipment in their pocket would lead to an explosion in DIY independent experimental cinema hasn’t exactly occurred, even if technology has allowed for a reduction in cost of some aspects of film-making.

“I think editing has a lot to do with it,” Tierney says, “I think everybody should be making films and everybody’s capable of it, but the ingredients that go into an interesting or good film – for want of a better word – there’s your framing, there’s what’s happening within your frame, there’s the visual rhythm within the frame, and then the visual rhythm from one cut to the next, how your film is constructed. I think those things apply no matter what you’re shooting with.”

Tierney’s next project will see her return to New Orleans, but this time to investigate the time Wolfe Tone’s son, William Theobald Wolfe Tone, spent in the city, attempting to recruit troops with others to fight for Mexican independence.

The rhythm of Tierney’s film-making, as seen in Down Claiborne, is somewhat meditative, but simultaneously also packed with information. At its core, Down Claiborne highlights the impact decisions imbued with a sort of apathy towards those who will be most affected – such as the construction and presence of the I-10 overpass – and how people continue with their culture and collective activities regardless, and how they circumnavigate, literally, the obstacles put in their way and endure and succeed.

“I guess you can probably call it modern slavery right now,” the voiceover says at one point, “but, you know, we a little more freer than what we was, you know, when we was actually on the chain gang. Our people still working hard for no money. But if there’s something that you love, your art is priceless.”

Down Claiborne screens at the IFI in Temple Bar, Dublin, at 6.30pm on Thursday November 7th, followed by a Q&A with Moira Tierney. Tickets are €13

Under the Red White and Blue: Greil Marcus’s Gatsby marred by self-indulgence
9

Galway Film Fleadh online: The highlights of what to watch from wherever you are
Real news has value SUBSCRIBE