Horns review: what the devil is Daniel Radcliffe at? 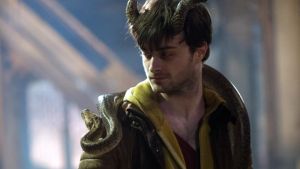 Everybody has something they need to escape (even if they won’t admit it). Here’s Daniel Radcliffe backing away from a certain juvenile wizard in an adaptation of an allegorical horror novel by Joe Hill. That writer is, of course, the son of Stephen King and he would surely like to put some polite distance between himself and the mighty patriarch.

Hill fares somewhat better than Radcliffe in Alexandre Aja’s agreeably peculiar piece. The actor plays Ig, a troubled DJ from the Pacific Northwest on bail for the murder of his childhood sweetheart (Juno Temple). Virtually everybody in the remote logging town thinks that he deserves to fry. Even his parents seem uncertain as to his innocence.

Unable to shake one of his father’s favourite tropes, Hill takes us back in time to find Ig interacting with childhood friends whose lives will remain entangled for decades. You know how it goes from It, Dreamcatcher, Stand by Me and a dozen others. Teenage infelicities lead to adult catastrophes.

The opening hour is genuinely interesting. Like dime-store Kafka or penny-dreadful Ionesco, the film uses Ig’s transformation to make sly points about the hypocrisy of human interactions. Then, unfortunately, the anti-hero sets out to solve the murder and much of the film’s oddness gives way to genre clichés. In its later stages, Horns plays a little like a pastiche of a 1970s high-concept detective show: Quinn Martin presents Devil Cop!

Sad to relate, however, the film’s biggest problems concern its central performance. There is an inherent sweetness to Radcliffe that has nothing to do with our memories of young Harry. He can knock back the booze. He can suck on the fags. But the existential angst just washes clean off his fresh skin like the Washington State rain. Oh well. There are worse problems than seeming too darn nice.