Was The Lone Ranger gunned down by bad marketing decisions? 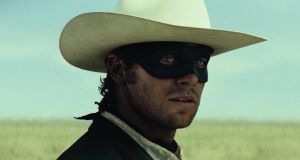 So the Lone Ranger gang is claiming that US critics killed off their little $250 million movie. Hmmm. True, critics in the US were unduly harsh toward a film that is, for the most part, more enjoyable than the same team’s Pirates of the Caribbean films.

The gang might equally look closer to home: Disney’s decision to release Stateside first now looks foolish: European and rest-of-world critics were always likely to be kinder to the archly pitched project. The month-long release gap between Anglophone territories – Ranger hit US screens on July 3rd – is the kind of delay audiences have come to associate with turkeys. Savvy movie punters know that big movies – proper big movies – are released day-and-date worldwide, give or take a week here and there.

Besides, folks as experienced as Lone Ranger producer Jerry Bruckheimer and starJohnny Depp ought to have realised that Americans just don’t like westerns.

True, True Grit took home a tidy sum, but the Coen Brothers’ Oscar-winner was an exception. Over the past decade, plenty of proven film-makers have made plenty of lovely horse operas to little end commercially: think Tommy Lee Jones’s The Three Burials of Melquaides Estrada or John Hillcoat’s The Proposition.

The makers of The Lone Ranger might also have noted the last two big-budget western-themed summer pictures were Wild Wild West and Cowboys and Aliens. Barry Sonnenfeld’s 1999 mega-flop made just $222 million back on its then record breaking $170 million budget; Jon Favreau’s 2011 dud cost $163 million to make and took only $175 million.

To date, The Lone Ranger has mustered $175,554,647 worldwide – and just $86 million of that in the US. The picture will need a miracle to claw its way into the black after a hefty $215 million production spend. A staggered release only ensures that the film hits Irish cinemas with the whiff of failure and several cartoon flies buzzing around its carcass. The lesson: in summer, go global or go home.

It’s not just The Lone Ranger. For years, Hollywood had an “after you” policy whereby every grand summer release gets at least one weekend to itself, a polite capitalist system that dates back to The Adventures of Buckaroo Banzai’s 1984 box office meltdown against Star Trek III, Ghostbusters and Indiana Jones and the Temple of Doom.

In theory, audiences will go see, say, Man of Steel and then they’ll go see next weekend’s biggie. Except this summer has yielded an unusually high number of casualties, notably Pacific Rim and The Lone Ranger. It has, equally, yielded an unusually high number of sleeper hits; namely The Conjuring and Now You See Me. The former opened to €219,002 in ROI last weekend: the latter continues to prop up our top 10 with a rolling total of €965,080. See also Blackfish’s €13,006 and Francis Ha’s €27,463 in the punching-above-weight category.

Nobody, as they say, knows anything.