Henry Golding on taking the scenic route to the big screen

The official trailer for The Gentlemen, directed by Guy Ritchie. Video: Miramax 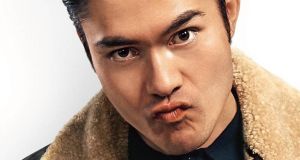 Two years ago, Henry Golding was a suave travel presenter known for his work on the BBC, National Geographic, and the Discovery Channel. He’s as surprised as anyone to find himself playing a hoodlum within the starry ensemble – including Colin Farrell and Hugh Grant – of Guy Ritchie’s latest film, The Gentlemen.

“It’s insane,” says Golding. “I’m sitting opposite Matthew McConaughey and doing some really intense scenes with him. It was crazy. But you have to rise to the occasion and there are absolutely wonderful professionals all around you. And then there’s all the guys that Guy Ritchie worked with since the very beginning. So it’s like being invited into this boisterous club.”

If I was ever going to be in a Guy Ritchie film, this is what I wanted to do. I wanted to be the guy with the Uzi. It’s a pretty f***ing crazy character

The Gentlemen is Golding’s first stab – if that’s the right word – at thug life. His character, Dry Eye, is arguably the angriest man in a film defined by thuggery. It’s an odd development for an erudite soul who uses phrases like “I hope you don’t mind”. Odder again when one considers that Vogue magazine has characterised the actor as having “the posh British accent of Prince William, a Cary Grant-ian twinkle in his eye, and a dreaminess that is entirely his own”.

“But jumping in with Guy was so incredible,” exclaims the 32-year-old. “I’ve grown up with his work. Lock, Stock and Snatch and RocknRolla. I was still doing press for Crazy Rich Asians when I had my first meeting with him. We went over to his house and had some whiskey – as you do – and he told me about The Gentlemen. And I said: ‘Whatever you need me to do and whenever you need me to do it – I’m doing it.’ And if I was ever going to be in a Guy Ritchie film, this is what I wanted to do. I wanted to be the guy with the Uzi. It’s a pretty f***ing crazy character.”

He’ll have to keep up the butch swagger for a little longer. He’s currently shooting Snake Eyes, the third instalment of the GI Joe franchise and a spin-off for the top commando of the title. The original character is such a lone wolf that his pet is also a lone wolf. Named Timber. Golding famously ventured into the jungle to complete his gruelling bejalai – the indigenous Iban rite of passage into manhood – deep in the wilderness of Borneo for Surviving Borneo, a Discovery Channel show. But preparing for screen combat was something else.

“We’re on a break at the moment for Christmas,” he says. “We had a month and a half of intensive training before we started filming. I think people are going to be really surprised. They’re going to say: we didn’t know you had it in you.”

These days, Golding is on “the other side of the red carpet” and is every bit as gracious as you might expect from someone using that phrase. He had a peripatetic childhood: born in East Malaysia to an English father and Malaysian mother, he lived in Terengganu, in East Malaysia, until aged eight, when he moved to Surrey.

“It was a massive culture shock,” he says. “I grew up on the coast. It was an expat community. So my first language – and only language, really – is English. But from running around beaches without a care in the world to landing in Redhill in Surrey is a huge shift. It was great for me. I was a kid. So you’re extremely malleable and everything is exciting: the smells and the tastes and the people. It was a joy. I think it was a little bit more difficult for my brother because he’s four years older than me. So he was going straight into the start of secondary school knowing no one.”

Aged 14, Golding took a job sweeping up hair at a barbershop. By 16, he left school for an apprenticeship at Richard Ward Hair and Metrospa in London. Ward is the long-standing clipper for the Duchess of Cambridge, among others. He could have been a contender, says Golding.

“I was a fantastic hair stylist!” he laughs. “I had great potential. Really. So much so that the boss was quite surprised that I was leaving to follow my dreams of being a presenter.”

Aged 21, with no particular career plan, and on the advice of several hair clients, Golding returned to Malaysia hoping to land a job in television. He quickly found work on the variety show 8TV Quickie and a commentary gig with Football Crazy. In 2014, the BBC snapped him up for The Travel Show.

“When I used to go back to Malaysia for summer holidays I’d watch a lot of TV,” he says. “Over in Asia the majority of presenters are mixed European and Asian. So they look like me and they have the same accent as me. I always thought that looked like tremendous fun. ‘I’d love to do that one day.’ So the seed was planted. But when I left, lots of my friends didn’t turn up for my going-away party. Because they all thought I’d be back in a month.”

Golding didn’t set out to be a leading man. In fact, he had no acting ambitions whatsoever. But Lisa-Kim Ling Kuan, an accountant and financial controller at Pink Productions, had other ideas. Lisa-Kim had met Golding at a party in Kuala Lumpur, several years before she found herself doing the books on Crazy Rich Asians, an adaptation of the 2013 novel of the same name by Kevin Kwan. That film’s director, Jon M Chu, had seen everybody for the role. Lisa-Kim kept insisting that she had already met her idea of Nick Young from the book: it was Henry Golding. Trouble is, he had already said no.

I thought: ‘If I love this movie, then other people are going to enjoy it.’ I knew from then on that it was special

“Acting had crossed my mind but it was a pipe dream,” he says. “But I thought: ‘Oh, when the time’s right, when I feel as though I’m ready, then I’ll go for it.’ But when you think like that and put those blinkers on, then, when an opportunity arises, you’re thinking: ‘Oh I’m not ready yet.’ So a few casting agents had called me in to audition and I said: ‘No, no, no. I’m a host, not an actor.’ I’m sure there’s a super, deserving actor that is much better for that role than I am. I turned it down at least three times. It wasn’t until Jon got a hold of me through [Lisa-Kim], and we had this 45-minutes Skype call that I was ready to give it a go. The call was like a slap in the face that said: what the hell are you doing?”

Crazy Rich Asians grossed $238.5 million, against a production budget of $30 million. By October 2018 it had become the highest-grossing romantic comedy of the decade, and the sixth-highest-grossing rom-com of all time. It was a star-making project for Golding, Constance Wu and Awkwafina. A month after its box-office rocking premiere, Wu appeared on the cover of Time magazine under the headline:“Crazy Rich Asians is going to change Hollywood”.

“I remember Jon came back to Singapore for two or three days of reshoots,” says Golding. “And he snuck over a copy – a really, really rough copy – of the film that we watched in my living room with the DP and one of the line producers. And I was taken aback because I just loved the movie. And I thought: ‘If I love this movie, then other people are going to enjoy it.' I knew from then on that it was special. But we didn’t realise how we would catch the zeitgeist and the people would turn out like they did; I mean, that was unbelievable.”

He has subsequently proved his worth as a romantic lead, working twice with Paul Feig on Simple Favour and Last Christmas. And yes. He has read the “makes you want to punch a reindeer in the face” reviews for the latter.

“Was it the Rolling Stone one?” he asks. “I think it was. There was a lovely quote about finding a lump of coal stuck in your rectum. Something of that sort. But, you know. I got more response for Last Christmas, in terms of people coming up and saying how much it meant to them, than I did for Crazy Rich Asians. They were such polarising reviews from professionals. But people who actually pay to go and watch it seem to love it. It’s still chugging along, going past $90 million at the box office. So we must be doing something right.”

The Gentlemen is released on January 1st