New this weekend: Beanpole, Citizen K, The Kingmaker, Jumanji: The Next Level, Fiddler: Miracle of Miracles 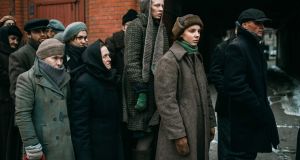 The womanly faces of war: Beanpole, on limited release

BEANPOLE ★★★★★
Directed by Kantemir Balagov. Starring Viktoria Miroshnichenko, Vasilisa Perelygina, Konstantin Balakirev, Andrey Bykov. Lim release, 130 min
This extraordinary drama opens with the rasping, popping sounds of Iya (Miroshnichenko), a stringy, alabaster-skinned blonde suffering from momentary paralysis. Iya, a nurse in a city hospital for the war wounded, is suffering from post-concussion syndrome after fighting on the frontlines during the Siege of Leningrad. She’s one of many traumatised characters in Beanpole, a free and imaginative adaptation of Svetlana Alexievich’s The Unwomanly Face of War. Iya accidentally suffocates Pashka during one of her fits just before the boy’s biological mother Masha (Perelygina) returns home from the military. Masha’s insistence that Iya “owes her a life” coalesces into a bizarre forced surrogacy plot, as the women’s friendship becomes the most unhealthy female pairing since Rainer Werner Fassbinder’s The Bitter Tears of Petra von Kant. To date Beanpole, its two female leads, and its writer-director (26) have hoovered up 14 major film gongs. Expect that run to continue well into awards season. TB

Gibney’s documentary about post-Soviet Russia is a compelling if disconcerting experience. Mikhail Khodorkovsky recounts several compelling twists of fate as he journeys from Glasnost hustler to oligarch to dissident. Gibney, working with BBC archival footage, thrillingly relates the Wild West capitalism of the Yeltsin years, as predatory nascent capitalists swooped in to buy up the stock vouchers given out to every citizen. This sickening spectacle is made worse by the subject’s gleeful account and his subsequent acquisition of a sizeable chunk of Siberia’s oilfields and a personal fortune of some $15 billion. It’s only when Khodorkovsky challenges Vladimir Putin’s authority that he finds himself convicted of tax evasion, money-laundering, and embezzlement. He insists that the years he spent in prison between 2005 and 2013 have made him a more thoughtful person. The jury is out. TB

They say comedy = tragedy + time. Aa strange perversion of that formula underpins this gobsmacking portrait of Imelda Marcos, 33 years after protestors stormed Malacanang Palace and found 2,700 pairs of designer shoes belonging to the former dictator’s wife. A generation later she was back in the Philippines, running her son Bongbong for vice-president and strongman Rodrigo Duterte for president. The outrageousness is powered along by some $5 to $10 billion plundered by the US-backed regime, a sinister Google campaign, and historical ignorance. Schoolchildren interviewed speak of the good old days of martial law under Ferdinand and Imelda, a time defined by 3,257 known extrajudicial killings and 35,000 documented tortures. “When I see Manila, I feel so depressed and sad,” says Marcos, without a hint of irony. “Before, during my time, there were no beggars. I had a place for them”. A terrifying reminder that those with absolute power don’t make good retirees. TB

We re-renter the Jumanji video game in a follow-up to the hugely successful sequel. The melange of good and half-good ideas fight against one another for too long. The pastiche of gaming tropes adds little new to a conversation. Yet, for all its weird compromises, Jumanji: The Next Level never stops being good fun. The sheer randomness of the exercise keeps you awake as might an evening spent at the wrong end of an army firing range. And we like these actors. Full review DC

Biddy-biddy-bum to all cinemas finding space for this lovely, engrossing documentary on an unlikely cultural phenomenon that helped close off the Broadway musical’s second golden age. There are no huge innovations in Lewkowicz’s consideration of Fiddler on the Roof. Some attractive animation by Tess Martin breaks up a lengthy series of talking heads. The tales they tell, however, will delight any fan of the genre. They may even win over a few unconvinced by musical theatre. DC

Joan (Manville) and Tom (Neeson) are a long-married and contented Belfast couple who go for walks along the coast (as far as the tree and turn) and lightly bicker over how much beer to buy at the supermarket. They lost a daughter years before, but these days adding Worcestershire sauce to the soup is the most seismic development in their lives – until Joan discovers a cancerous lump on her breast. Co-directors Barros D’Sa and Leyburn first came to prominence with the riotous Cherrybomb and Good Vibrations. Working from a personal screenplay from Owen McCafferty, the film-makers paint an intimate portrait of a couple in delicate brush strokes. Ignore the unassuming title: this love story is extraordinary. Full review TB

Other ★★★★★ and ★★★★☆  films out and about: Blue Story, The Irishman, Knives Out, Marriage Story, The Nightingale, A Shaun the Sheep Movie: Farmageddon, The Two Popes

Go to Auschwitz, buy a trinket: Howard Jacobson on how we treat the Holocaust
2

Weathering With You: Thrills and humiliations of teenage romance
9

Love Island: It’s deranged. What am I actually watching?
10