Harvey Keitel: from the marines to the screen, from Scorsese to Tarantino

The actor with a five-decade mean streak of a career shows little signs of mellowing. 'I took on the ups and downs," he says. 'Sometimes they won. Sometimes I won' 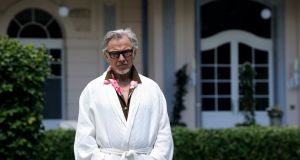 On the robe: Harvey Keitel as the struggling director in Paolo Sorrentino’s Youth 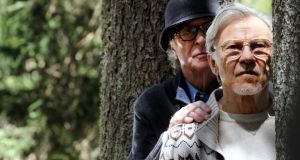 “It’s like we knew each other for a lifetime.” Harvey Keitel with Michael Caine in Youth

Harvey Keitel raises his fist in the air as he walks toward me: “Éirinn go brách,” he cries.

We should not be surprised that the man knows his audience. A pleaser of crowds for some five decades, the 76-year-old first came into prominence when American cinema was at the height of its post-classical powers. It is, in fact, difficult to imagine the medium without him: would anyone else have sufficed in, say, Martin Scorsese’s Mean Streets? Or Jane Campion’s The Piano? Or Quentin Tarantino’s Pulp Fiction? Or Abel Ferrara’s Bad Lieutenant? Or Ridley Scott’s Thelma & Louise?

This is not bad for a man, who, by his own admission, had no real business being an actor in the first place. Growing up in Brooklyn, long before the gentrification of that borough: his parents were Jewish immigrants from Romania and Poland, who owned and ran a luncheonette. His father supplemented the family income by working as a milliner.

“I don’t know where I got the idea from,” laughs Keitel. “My father used to say: ‘Where do you come to be an actor? No one in the family is an actor. You can’t sing. You can’t dance’. That’s the way it was in that culture. My parents were smarter than me. They knew what it was to be poor. They knew I was heading for danger.

“You’re from Ireland, right? So you come from a culture of poetry and literature and storytelling. Those things weren’t part of the culture in my neighbourhood.”

His parents had cause to be concerned. At 15, Harvey Keitel was kicked out of high school; he joined the US Marine Corps the following year. His military career would bring him to Lebanon, as part of president Dwight Eisenhower’s anti-Communist protection initiative, Operation Blue Bat.

“Things happen, but the discipline of the military defined my life to a great extent,” he says. “It gave me something that I didn’t have as a young man growing up. It gave me a sense of honour, of self-esteem, it gave me the lessons of endurance. I was able to handle much more than I thought I could handle or that I’d ever be asked to handle. And a very strong sense of camaraderie. I had that sense growing up in Brooklyn, but this was something deeper.”

Returning home, the former marine was working as a stenographer by day and appearing in off-Broadway productions by night, when, in 1967, he spotted an advertisement for a student film in trade paper: the picture, Who’s that Knocking at My Door, would give the actor his first leading role and would mark the beginning of a beautiful friendship with Martin Scorsese. The pair would re-team for Mean Streets (1973), Alice Doesn’t Live Here Anymore (1974), Taxi Driver (1976) and The Last Temptation of Christ (1988).

Convincing De Niro
It was Keitel who convinced Robert De Niro, a fellow-student training under Stella Adler, Lee Strasberg and the HB Studio, to take the role of Johnny Boy in Mean Streets.

“You get a feeling about people, you know?” says Keitel. “Same with directors. Same with everybody. The same way maybe somebody picked me out as an actor. Doesn’t matter if you’re in a room on the street. Sometimes you say ‘hello’ and sometimes you say ‘get the hell out of here’. And it’s entirely based on a feeling.”

Keitel’s earliest roles read like a random selection from 100 Films You Must See Before You Die: he played the aspiring titular pianist of James Toback’s Fingers (1978) in the same year he appeared in the directorial debuts of Ridley Scott (The Duellists) and Paul Schrader (Blue Collar).

Film lore and folk tales have it that Keitel’s departure from the fraught set of Apocalypse Now – his military experience simply didn’t tally with Francis Ford Coppola’s version of Captain Willard – led to years in the wilderness. Even Keitel’s Wikipedia entry uses the phrase “drifted into obscurity through most of the 1980s”.

This version of film history paints Keitel as one of Quentin Tarantino’s brilliantly engineered career restorations and likes to make reference to Saturn 3, a rapey 1980 sci-fi, in which Keitel’s unconvincing dialogue (“You have a great body – might I use it?”) was overdubbed by Amadeus star, Roy Dotrice.

It’s true that when Keitel starred in Quentin Tarantino’s Reservoir Dogs (which he co-produced) in 1992, the picture introduced him to a new, younger demographic. But the actor’s credits during the “obscure 1980s” are hardly lacking in lustre: Bertrand Tavernier’s Death Watch was rightly shortlisted for Berlin’s Golden Bear and for five César Awards; Ettore Scola’s That Night in Varennes was a contender at Cannes, and, even though his performance as Judas earned him a Golden Raspberry Award for Worst Supporting Actor nomination, most right-minded viewers enjoyed his turn in The Last Temptation of Christ.

“What do we say? If you want to make God laugh, tell him your plans. My beginning was difficult. I came from the working class or lower middle class or whatever you’d like to call it. But there was no work in theatre or movies for the class I came from. I had no chance to get an agent or to get a job or to get anywhere.

“But I kept going. I was driven by youth and ignorance. And I got lucky. Luck counts in acting. It’s a big, big factor. Once my career took off, it had its ups and downs. Like most people. Except, in acting, most people don’t have a career. I’m lucky. I’m not crying about anything. I took on the ups and downs. They took me on. Sometimes they won. Sometimes I won.”

Likes a bit of banter
A compact fellow, who isn’t nearly as bulldog-intense as you might suppose, Keitel sure likes a bit of banter and asks as many (and maybe more) questions than he answers, as he touches on books and tattoos and tea and Celtic art and whatever you’re having.

It’s an opulent affair. “Yes it is,” says Keitel. “The story was very clear on the page. But the trappings of the film is the art of Sorrentino. The music. The visuals. The staging. It’s like summer stock theatre. People running around with lots of hair and make-up. There are creations all around you. You’re living in a piece of art.”

For all the lush visuals, the film’s best scenes are the buddy exchanges between Caine and Keitel. “It’s funny. I’ve never worked with Michael before. But as Michael keeps saying: it’s like we knew each other for a lifetime. We never even met before the movie. The only way I can account for it seeming like an old friendship is that we’re two of only a few actors who have served in the military: Michael in the British army and me in the Marines. So we had a language, a common tongue between us.”

He must know well the frustration that his character feels in trying to get a much-cherished project off the round? “Oh, that hasn’t happened to me in a long time.”

He pauses, then guffaws: “If six months ago is a long time. Just last year there were three movies I was eager to do. But they didn’t happen. That’s film. That’s the business. Film and business don’t always mix well. You have to hang on in there.”