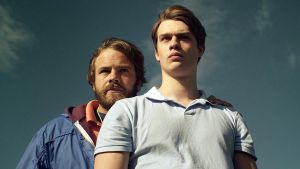 A tendril of narrative tissue accidentally binds John Butler’s lovely second feature to one of last year’s most admired Irish films. In John Carney’s Sing Street, young Cosmo, whose family are financially embarrassed, watches his pals go off to a posh school while he must struggle at a rougher establishment run by nasty headmaster Don Wycherley.

Here Michael McElhatton plays a more accommodating principal at just the sort of rugby-obsessed school Cosmo missed out on. Somebody needs to tie these alternative realities together in a postmodern novel.

Anyway, Handsome Devil constitutes a marked advance on Butler’s earlier feature The Stag. It is positioned in similar mainstream territory – and is again set among an all-male environment – but the picture feels more confident, more sincere and surer in its philosophy. Fionn O’Shea is terrific as Ned, a sensitive music fan who feels ostracised at a school where rugger is the authorised religion.

He has a friend in Dan (Andrew Scott), the cultured English teacher, and an enemy in the boorish games master Pascal (Moe Dunford). Neither is as cliched as that adjectival description suggests.

No refugee from Dead Poets Society, Dan has a pompous, theatrical side that gives Scott the opportunity to boom as only he can. Dunford’s unstoppable amiability makes an insensitive duffer, rather than a sadistic monster, of the hearty Pascal. McElhatton’s headmaster strives to accommodate all warring elements.

The conflict between tribes is exemplified – and complicated – when Fionn gets a new roommate in the form of handsome, charismatic Conor (Nicholas Galitzine). He is a talented rugby player and, thus, surely belongs on the other side of the wall Fionn has built in his room.

Make no assumptions. The other boys, enraged by Fionn’s artistic leanings, tease him for assumed homosexuality, but we soon suspect that it is the sporty Conor who may be gay. Why should he not be?

The synopsis suggests flavours of the horrible public school in If… or the differently nasty hierarchies in US high-school movies such as Heathers. (Conor is prime “star quarterback” material). But Handsome Devil is kinder to its setting. Butler, who attended Blackrock College, amusingly references the way taunts get handed down through generations and, like everyday aphorisms, eventually lose their point of reference.

None of the boys can explain why they make a sort of nasal “Ewww” noise when bullying supposedly gay colleagues. Older viewers will immediately recognise a Kenneth Williams impersonation devised by fathers (or possibly grandfathers) many years earlier.

For all that, the school is not a place of endless torture. Butler allows a degree of decency to all his clashing personalities. Ned is initially oppressed by the rugby culture, but the film ends up by asking us to get behind the team’s efforts to win some cup or other. Brian O’Driscoll’s work as oval ball consultant helps deliver on-field action that won over even this rugbyphobic critic.

None of this humanistic generosity would matter if the central relationship refused to spark. Happily, O’Shea and Galitzine are both terrific in the twin lead roles. The former gets the quiet exasperation of the dreamer who can’t find anyone to share his interests. Galitzine, a handsome Englishman adopting a spot-on Irish accent, leans towards barely suppressed frustration.

Set in a deliberately uncertain period – contemporary fashions scored to 1980s musical references – Handsome Devil is proudly traditional in its storytelling. Setbacks come at just the right moments to prepare us for the next outburst of fist-in-the-air relief. Characters go through narrative arcs that rarely trouble fleshy human beings.

None of this is easy to achieve. Butler has proved himself adept at the complex mechanics of the redemptive comedy. There is surely some closing rugby analogy would accurately convey the brightness of his future. You’ll have to ask someone else to supply it.