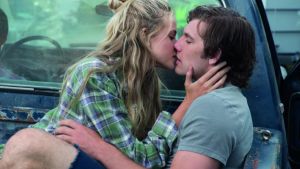 This largely useless remake of the indifferent Franco Zeffirelli weepie from 1981, best remembered for its lachrymose theme song and for dubious sex scenes involving a teenage Brooke Shields, arrives as a most unusual mash-up between two genres of bad film.

Hammering down the few dangerous edges from the original, the new Endless Love details the romance between a posh girl from a good family (the diaphanously wispy Gabriella Wilde) and a muscular mechanic with very mild tearaway tendencies (the stubbornly still-employable Alex Pettyfer). Whereas Gabriella’s mum – played by Joely Richardson with the same unstable American accent her mum, Vanessa Redgrave, pioneered 40 years ago – is willing to accept the not-terribly-rough diamond for what he is, her pompous, domineering husband (Bruce Greenwood) is forever scowling and pointing menacingly towards the door.

Endless Love feels, in short, like one of those creaky 1950s teen dramas in which Sandra Dee tried to persuade her folks that the greasy chap in the biker jacket was just as trustworthy as the preppy fellow in the sports coat.

Given that such films now seem as unfamiliar as Viking epics, most viewers will, however, be struck by the piece’s commonality with the adaptations of Nicholas Sparks novels: the same sunny southern settings, the same adolescent angst, the same determination to cram your trachea with glutinous pseudo-emotions. It really is a combination forged in the darkest corners of movie history.

To be fair, Endless Love is a little slicker than the average Sandra Dee picture and a little less sleepy than most Sparksiana. Indeed, the piling on of plot – a dead brother, an unexpected affair, something confusing involving Pettyfer’s mum – is so relentless that boredom is kept at bay for most of the film’s busy duration.

Still, smart couples can surely find more diverting ways of soaking up Valentine’s Day. Isn’t there curling on the telly?