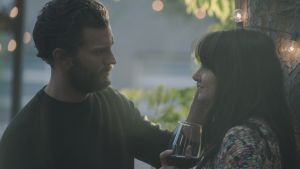 Drake Doremus has, over the past decade or so, been winning awards at Sundance for his flighty, drifty romances. Like Crazy from 2011 — in which Alton Yelchin and Felicity Jones loved each other over great distances — showed his talents to their best advantage.

The Californian director owes something to the mumblecore pioneers that came before, but his approach is a little more mainstream, a little more bourgeois, a little more cosy. Just check out the soundtrack on his latest romantic drama. A touch of Ed Harcourt. Some Wild Beasts. Some more Sophie B Hawkins. No horses will be frightened here. If the film had gone on a little longer we might have happened upon Adele.

There are more reasons to make fun of Endings, Beginnings (as you will soon read). But there is something delicious about the sheer indulgence of the thing. Throwing off any serious effort at structure, the film meanders amiably after young Daphne (Shailene Woodley) as she bounces between hunky love-machine Frank (Sebastian Stan) and hunky writer Jack (Jamie Dornan).

Doremus shoots the film as if his mobile camera is struggling to get the characters into frame. There is often something in the foreground. The lovers reel out of middle distance as we fail to catch their expressions. By the end of this overlong film, many will conclude that pursuit has barely been worthwhile. The personalities are hard to parse because they barely exist.

Daphne has already reached a crisis in her young life. Unhappy about all the things that matter, she has broken up with her bad boyfriend and quit her unsatisfactory job. In an unpromising move for a rom-dram, she swears off men and booze but, following encounters at a party, happily clatters off both wagons. And how. She is soon knocking back absinthe with one of two super-handsome bachelors.

Doremus devises a neat (too neat?) complementary array of Top Trump scores for the competing lovers. Frank is better in the sack, but he’s not much of a conversationalist. Jack is marginally less successful in the orgasm-provision department, but he says things that hint at wit and perception.

I suppose we should congratulate the filmmakers on not turning the latter character into a twinkle-voiced Irish stereotype. Jack doesn’t lean towards any incontinent spouting of Yeats. No enormous truths are revealed when he is in his cups.

Always a charming actor, Dornan, in truth, has precious little to work with here. Like Rory in Gilmore Girls (there’s a comparison you didn’t see coming), he consistently eludes to great learning, but rarely says anything that demonstrates this alleged erudition. The character would actually be a little more compelling if he did lean more towards Celtic caricatures.

Playing the less intellectually nuanced competitor — his social-media tag is “Frank Surfer Buddy” — Stan need only growl and flex to stake his romantic claim. This he can do.

There is a little more depth to Daphne. By the close, the sense of a young woman facing up to her own insecurities does emerge. Nobody will confuse her emotional journey with that of an Ingmar Bergman character, but the charm of the presentation makes up for the lack of substance.

Unlike the recent, superior Saint Frances — another tale of a woman on the cusp — Endings, Beginnings makes few gestures to the current zeitgeist. This is an easy-going sitcom universe that sooths more than it challenges. Text messages flit by in bright colours. Everyone is prettier than peaches. The massed singalong to Losing My Religion is close to unbearable, but it’s over in the roll of an eye.

And you will, anyway, almost certainly be watching with a remote in hand.

Available to stream on August 7th