Almodóvar says he will be ‘fighting for the capacity of hypnosis of the large screen for the viewer’ in the Palme D’Or, while Will Smith rows in behind the streaming service

US actor Will Smith has wowed the crowd at Cannes where he is a member of this year's Film Festival jury and defended digital streaming service Netflix saying it has had 'absolutely no effect' on cinema-goers and both could peacefully co-exist. 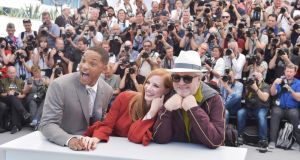 The Netflix row rumbles on at Cannes. At a press conference, Pedro Almodóvar, president of the jury that awards the Palme d’Or, came close to saying that he would, on principle, not give the prize to either of the company’s entries in the official competition.

“I personally don’t perceive the Palme d’Or [should be] given to a film that is then not seen on the big screen,” he said on Wednesday. “All this doesn’t mean that I am not open or celebrate new technologies and opportunities, but as long as I’m alive I’ll be fighting for the capacity of hypnosis of the large screen for the viewer.”

Over the last week, much controversy has bubbled around the inclusion of Noah Baumbach’s The Meyerowitz Stories and Bong Joon-ho’s Okja, both Netflix productions, in the race for the Palme. When it became clear that Netflix was not intending to release the films in French cinemas, the organisers announced that, from 2018, no picture would compete if it did not play theatrically in the festival’s home territory. Were the rule in place this year, neither film would have been admitted.

Will Smith, who is also serving on the jury, seemed to take issue with his boss’s stance. “I have a 16-year-old and an 18-year-old and a 24-year-old at home,” the actor said. “They go to the movies twice a week, and they watch Netflix. In my home, Netflix has had absolutely no effect on what they go to the movie theatre to watch.” It is worth noting that Smith will shortly appear in Netflix’s science fiction epic Bright. We draw no dangerous conclusions from that information.

It is most unusual for a president to make such a statement before the competing films have even gone before an audience. Indeed, the Cannes jury tends to maintain monkish silence until (and after) the Palme is in the hands of the winner. Almodóvar does, however, have some wriggle room. Okja will play theatrically in its native South Korea and will receive a very limited UK release from Curzon Cinemas. But what would happen if he was outvoted on The Meyerowitz Stories?

In truth, most Cannes watchers believe that, following the organisers ruling, either film would need to be immeasurably superior to its competitors to take the top prize. Otherwise, we could see a diplomatic incident of historic proportions.

An interesting comparison could be made with last week’s Bafta TV awards. To the surprise of many, the hugely lavish, highly praised The Crown, on which Netflix is rumoured to have spent more than $100 million, received not a single gong from the British Academy. Traditional modes of exhibition dominated the awards with Happy Valley beating the Windsor saga in best drama.

He may have already got what he was looking for.