The Ballad of Buster Scruggs: Bucks you right out of the saddle

Review: The Coen brothers have endless fun in their Western-themed portmanteau film

Trailer for the Coen brothers film The Ballad of Buster Scruggs 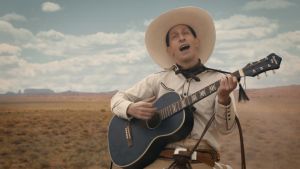 History records that the new Coen brothers film was intended to be an anthology series for Netflix. For how long was this an intention, exactly? The Western-themed portmanteau film The Ballad of Buster Scruggs, which rather than having an Irish cinema release is streaming from Friday, couldn’t look more like a carefully constructed omnibus if it emerged from the Amicus imprint during the 1960s and featured Christopher Lee as the Host and Joan Collins as the Girl.

An overture featuring Tim Blake Nelson as a musical cowboy – think Rory Calhoun with a psychopathic hit rate to rival Henry Fonda’s in Once Upon a Time in the West – provides the first of many neat genre inversions.

Eighteen films into their career and the Coens have done more to preserve the Western than any of their contemporaries. The expanded hayseed universe of Buster Scruggs often feels closer to the heightened world of O Brother, Where Art Thou? or the ramblings of Sam Elliott in The Big Lebowski than to the psychogeography of True Grit or No Country for Old Men.

There is endless fun to be had with the cod Blood Meridian dialogue and tropes. There are whooping murderous Indians, sullen saloons, high-noon stand-offs, trail wagons and a travelling freak show. There are many demises: if Seth MacFarlane hadn’t already snagged the title, the project might have been called A Million Ways to Die in the West.

The singing titular character ushers in a blackly comic vignette featuring James Franco as a black-hat cowboy who evades one terrible fate only to face another.

Almost inevitably, there is an unevenness in the quality of the instalments: Tom Waits’s Prospector sequence is more of a doodle than a story. There’s macabre fun to be had with the Coens’ reworking of the Cóiste Bodhar myth, in which an Englishman (the Irish actor Jonjo O’Neill) and an Irishman (Brendan Gleeson) accompany Tyne Daly and other mismatched passengers in a galloping coach.

Liam Neeson makes for a sinister impresario to Harry Melling’s limbless thespian in Meal Ticket. The best segment, however, concerns a spinster (Zoe Kazan) and a love-struck trail hand (Bill Heck). Just when you imagine this is the closest the sibling directors have ever come to romantic drama, they buck you right out of the saddle.

Bruno Delbonnel, the veteran cinematographer who filmed Amélie and Miss Peregrine’s Home for Peculiar Children, enjoys playing with supersaturated colours and genre iconography almost as much as the brothers Coen do.

Westlife’s fans across Africa: ‘I listen to them every day’
9