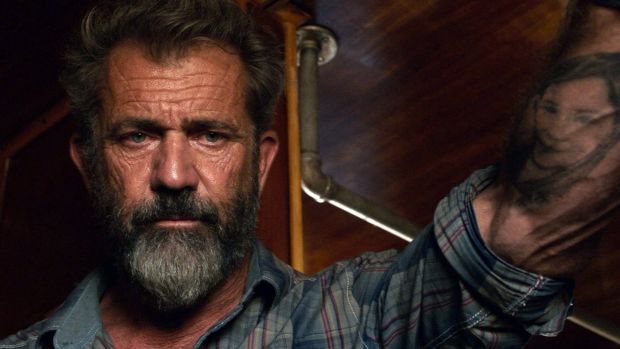 You have to love a movie that opens with a teenage girl stocking up on bubble-gum and box after box of 9mm ammo, only for the cashier to balk when the adolescent attempts to buy cigarettes without ID.

It’s a nicely crafted moment. Yet one can’t help but do a double take when the phrase “Based on a novel by Peter Craig” appears during the end credits of Blood Father. A credit reading “Based on the poetry of TS Eliot” or “Inspired by the popular breakfast cereal” would not look any more implausible in the circumstances.

It just seems so unlikely that this Mel Gibson actioner could exist in any other medium or form.

Jean-François Richet, the dependable director behind Assault on Precinct 13 (2005) and Mesrine (2008), makes the very best of Gibson’s impeccable comic timing and craggy features. This could easily be an older, wounded version of the young gunslinger we watched in the Lethal Weapon sequence, and, in common with those movies, Blood Father marries ultra-violence and family values, as a daddy and daughter duo hit the road.

The titular patriarch is John Link (Gibson), a lately reformed alcoholic and ex-con, who lives life one day at a time courtesy of his sponsor (William H Macy). As the film opens, Link works as a tattoo artist in the remote trailer park where he lives; he has not seen his daughter Lydia in years, save “on the side of a milk carton”.

When Lydia (Captain Fantastic’s Erin Moriarty, in wonderful form) does show up, fresh from a hit of methamphetamine and gunplay gone wrong, she has fallen in with a very bad crowd indeed.

The reunited and mismatched family unit take to the road to find out more about Lydia’s boyfriend Jonah (Diego Luna), and to stay one step ahead of his murderous gang.

Out on the road Gibson and Moriarty trade entertaining one-liners and run in to such welcome supporting players as Miguel Sandoval and Michael Parks.

A final stand-off requires one too many contrivances – Link knows a guy, then Link knows another guy – but Blood Father boasts enough momentum and lively banter to compensate for any generic leanings. Robert Gantz’ scorched cinematography keeps the heat on, even during quieter moments.