A ‘baffling’ adaptation of Sebastian Barry’s The Secret Scripture 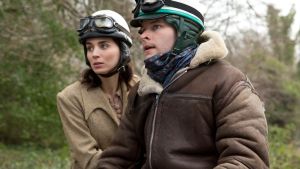 On yer bike: Rooney Mara and Jack Reynor in The Secret Scripture

Jim Sheridan begins and ends his adaptation of a much-loved Sebastian Barry novel in risky fashion. Vanessa Redgrave is here to unreliably narrate a tale of youthful tragedies during the second World War.

Many viewers will find themselves remembering Dame Vanessa doing something very similar in Joe Wright’s Atonement. In that film, the screenwriters came up with a device that – though a bit clunky and rough edged – converted a literary conceit into a cinematic one with clarity. At least we knew what was going on.

To properly understand how badly The Secret Scripture manages (I assume) a related dilemma, it is probably best not to have read the novel. So baffling are the motivations, so weird are the coincidences and so unlikely are the catastrophes that the film suggests an adaptation of a South American magic realist text.

One half expects Jack Reynor to turn into an elephant or Aidan Turner to become a lake. If you’ve read the source, you can probably fill in the yawning gaps. If you haven’t, you may end up as puzzled as this reviewer.

Confined to a mental asylum in the present day, Rose McNulty (mellifluously voiced by Redgrave) tells Dr Stephen Grene (Eric Bana) about her experiences in a Sligo town during the 1940s. Mikhail Krichman’s camera conjures up a beautiful, fantastic vista that suggests a John Hinde postcard of Brigadoon. The young Rose (Rooney Mara) glides through the streets wearing a face that will, over the course of the baffling action, move from puzzlement to desperation to apparent boredom.

For reasons that are not entirely clear – but may be connected to her exotic Protestantism – every man in the town is eager for her company. Sadly, no window cleaner falls comically from his ladder as she strolls by, but all other conventions of the 1970s hairspray commercial are in place.

Rose has arrived to work in her aunt’s café. Before too long, a cabal of dribbling sex pests are pressing noses to the window. Aidan Turner is underused as a man with no character. Theo James, whose looks suggest a shirtless pirate captain from the cover of a Harlequin romance novel, snarls with undisguised malevolence as the local priest. Chief among the suitors is the relatively civilised aspiring RAF pilot Michael McNulty (Jack Reynor). Michael and Rose eventually end up in something like a romance.

How to explain the impossible lack of chemistry between Mara and Reynor? Both are excellent actors but, each time they engage, one gets the sense they are suffering from the same amnesiac condition that struck Guy Pearce in Memento. They barely seem to recognise each other from one scene to the next. The near-random, occasionally absurd nature of the storytelling probably impeded any accumulation of emotion. Historians may well tell us that British fighters crashed as far west as Sligo, but I’m betting few accidentally landed in their girlfriend’s back garden. When you’re wrestling with sort of narrative its hard to keep the emotions bubbling.

Rose’s eventual incarceration kicks up troubling reminders of recent discoveries at the mother-and-baby home in Tuam. But those outrages deserve more sober commemoration than this misconceived clutter of melodrama and unintended comedy. The script, credited to Sheridan and the late Johnny Ferguson, seems wilfully uninterested in giving us the keys to unlock the accumulating mysteries. (Few of the overseas reviews seemed at all aware there was a sectarian element to the story.)

This is most conspicuous during the astonishing coup that closes the framing story. What’s that? Who’s he? Where’d that come from? When Barry’s novel was published, several critics argued that the final unlikely twist felt at odds with a hitherto disciplined narrative. It says something about the film that the reversal feels perfectly at home among so many even greater lunacies.

The Crown should carry a warning that it is a work of fiction, British minister says
4

Saving the State: intimate if flattering inside story of Fine Gael
8