Theatre, music and literature galore is to be found across the city from the 13th June 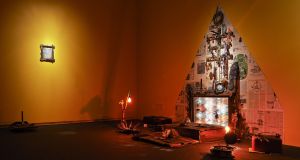 The modest citizens of Cork may wish to avert their eyes from the Crawford Art Gallery during this year’s Midsummer Festival when The Fig Reveal strips the leaves from the male members of the Canova Casts. It’s all part of the 10-day programme – often inventive, often new and often slightly irreverent – as with these impressive figures which came, after all, from the very Vatican itself and under the eyes of Antonio Canova in 1818. Despite the papal provenance they were considered a little too true to life for Cork and were amended in a way which, as Mark Twain once remarked, “brings modesty itself under suspicion”. The gallery’s sculpture conservator Eoghan Daltun will do the undressing of Adonis, the Belvedere Torso and others, with the leaves themselves not lost but on display (from June 17th to 28th).

Several significant introductions to the city’s cultural calendar include the inauguration of the Cork Proms at the Opera House in a programme of three successive concerts under conductor John O’Brien (21st - 23rd) while a melancholy note on the death last year of former chair of the festival Jane Anne Rothwell is lightened by the announcement of an award in her name for emerging women artists. Hefty issues such as climate change are addressed by artists such as Bill Balaska, using the discarded Toyota signs from the Opera House fly-tower (Emmet Place from 13th) and the presentation for the first time in Ireland of State of Print as an assertion of the significance of printed material (beginning at CIT College of Art, Grand Parade, from 13th – 23rd).

The new Cork Centre for Architectural Education presents its Invitation to Wander as an exploration of remote and threatened environments in a mixed-media sequence by composer Karen Power using the Quiet Music ensemble, Sound Choir, vocalists and recordings with imagery from John Godfrey (19th-22nd).

One of the few productions actually opening on June 13th is The Stalls at the Opera House. Written by Tom Lane and Lily Akerman as the final part of the House Trilogy chamber opera series, this reverses theatrical convention by making the audience the drama (13th-14th). Another interrogative experience is Theatre for One, bringing a single actor and a single watcher together in five-minute scripts from Marina Carr, Stacey Gregg, Emmet Kirwan, Louise Lowe, Mark O’Rowe and Enda Walsh (Opera House, 18th-23rd).

The hint of submerged theatre is heightened by Corcadorca’s new production of Enda Walsh’s The Small Things at the Old Cork Waterworks Experience on the Lee Road which begins at 10.30pm, so it will not just be damp but in the dark as well (17th - 29th ). Kaite O’Reilly’s play Cosy at the Firkin Crane may be the antidote, but although it’s always good to see Gaitkrash in performace, the words “dark” and “unflinching” in the programme notes don’t suggest a carnival (18th-22nd).

Before getting to the bowls of cherries - of which there are many - there’s the Mick Flannery musical Evening Train at the Everyman (14th - 23rd); the Gare St Lazare symposium on Beckett’s How It Is at the Crawford (14th ); Richard Proffitt’s installation May the Moon Rise and the Sun Set at UCC’s Dept of Music in Sunday’s Well; dance at the Firkin Crane; plays from Graffiti youth theatre; Sisus Circus at Elizabeth Fort; larks in every available park; lots of literature in buses and elsewhere including a Writers’ Dinner and a Night at the Gallery (22nd). As for cherries - take your pick from festival director Lorraine May’s menu, culminating in The Long Table feast uniting nine restaurants at various locations for €85 a seat. (14th - 21st).