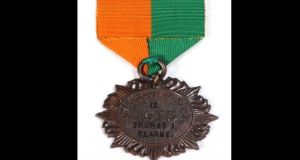 Tom Clarke’s medal, which had been expected to sell for up to €120,000, was withdrawn by the auctioneer when bidding stalled at €80,000. Photograph: PA

The 1916 Rising medals awarded posthumously to Thomas Clarke and Joseph Plunkett – two of the signatories of the Proclamation – failed to sell at auction in Dublin on Sunday.

The medals were among the 1916-related memorabilia that went under the hammer in Whyte’s History auction.

Top price was achieved for an original copy of the Proclamation which sold to an Irish-American collector in Maryland, USA, bidding by telephone for €185,000. This was within the estimate (€150,000-€250,000). The price was considerably lower than the £305,000 paid for another original copy at Sotheby’s in London in December.

The auction, ironically, was held in the Freemasons’ Hall In Molesworth Street – a quintessential remnant of British empire architecture – just yards from Leinster House.

A racecard for the Ward Union Hunt Steeplechases at Fairyhouse racecourse on Easter Monday 1916 – an event attended by many British soldiers garrisoned in Ireland and who were therefore unable to respond immediately to the rebellion – sold for €4,000. This was 10 times the estimate.

A bottle of whiskey distilled by the Dublin Whiskey Distillery (DWD) in 1916 – one of only four bottles believed to be extant – and, according to Whyte’s,“the oldest and most expensive Irish whiskey ever offered at auction” made €15,000.

The diary contains a white crocheted bookmark, in the form of a cross, reputedly sent to de Valera in prison by his mother.

Irish writers on Covid-19: ‘We’re all having a shockin’ dose of the wombles’
10 Miracle warnings and a lack of bull
Real news has value SUBSCRIBE