Donna Leon: ‘I had the good sense to make Brunetti someone I liked’ 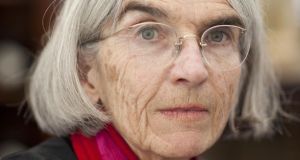 She wrote her first murder mystery in the early 1990s as “a kind of joke”. Some 22 books later, Donna Leon has notched up sales of well over two million, been translated into 35 languages and made the Times list of the 50 greatest crime writers. Her beloved series about Commissario Brunetti has inspired spin-offs including a mouth-watering cookbook, a historical guide to Brunetti’s Venice and a real-world business that offers tours of the city to visiting fans.

Guido Brunetti is not your typical shambolic, hard-drinking, over-worked policeman. He’s presentable and well-read. He gets home for dinner. He actually seems to enjoy the company of his wife, Paola, and their kids. He enjoys his wine and his glass of grappa, too – but not to excess.

Was this a bit of mischief on Leon’s part: to deliberately make him the antithesis of the crime-fiction stereotype? “It was pure chance,” she says. “All I wanted to do was write one book. I had no idea that there would be 23 of them. I got the idea of the murder of a conductor, and I wondered if I could write a murder-mystery about it. And so I did. But I had the good sense, even then, to make him someone that I liked. A nice guy and an intellectually and ethically interesting man.”


Affable and enthusiastic
The description might apply just as well to Leon herself. At 71 she is affable and enthusiastic, as passionate about Henry James and Handel opera as she is about the ravages mass tourism has wreaked on her adopted city. But she is also very much her own woman. She won’t allow her books to be published in Italian, so that she can live as close to a normal life as possible in her beloved Venice.

“People I deal with in shops treat me the way I should be treated: that is, as someone who comes in to buy cheese or milk or fruit,” she says. “There’s no hi-de-ho. The thing that upsets me more and more is the terrible inequality of fame. I see it in myself. I do it with opera singers. I am automatically deferential to opera singers because I admire what they do so much – and that’s not right. Everybody should be the same. You should treat everybody the same.”

This democratic strand is very strong in the Brunetti books. Their version of civilised life is not just a matter of drinking coffee and eating soft-shell crabs and ravioli con funghi. They are angry books, too. Many things make Leon – and by extension Brunetti – angry. Environmental degradation and toxic-waste scandals; people- trafficking and sex slavery; illegal adoptions and child abuse; corruption in the Catholic Church; blood diamonds.

“The paradox that one sees in Brunetti is the same paradox that I observe in my own life,” she says. “In terms of the world around me – politics, religion, art, music – I’m absolutely, deeply cynical and suspicious and black. But in my personal life I’m a happy person. I was just born a happy person. As I get older and see more, and view it with the accumulated information that comes with age, I don’t see any reason to be optimistic about our world. But I’m very optimistic about my life and my friends. Thank God it’s not the other way around,” she adds, laughing. “Imagine that.”

Over the course of the investigation, there is much discussion about the nature of books – a major concern for readers in the digital age. “Is a book simply a text, so that you could read it chalked on a wall if you had a big enough wall?” asks Leon. “Or is it a physical object which has a historical and financial value because of the quality of its production? And I don’t think the book answers that question, because there is no answer. People, depending on their disposition or their spirit, opt for one or the other.”

A major factor in the Brunetti series has been the strong female characters. From the start, Brunetti’s wife, Paola – a university lecturer and the daughter of wealthy Count and Countess Falier – has played a key role in teasing out the wider implications of Brunetti’s cases. Then, out of nowhere, a secretary named Signorina Elettra swanned in, complete with high heels, glam outfits and serious computer street-cred. And now, an able young southern cop, Claudia Griffoni, is edging closer to the centre of the investigative stage.

For the moment, however, Brunetti fans need not worry: number 24 in the series is already written. It will take Leon back to the world of baroque opera, where she set her first novel, Death at La Fenice .

She surely deserves it.

‘North Dakota, nul points’: Why the American Song Contest can never be as bizarre as Eurovision
8