Call me a kook, but this ‘killer clowns’ craze gives me the creeps 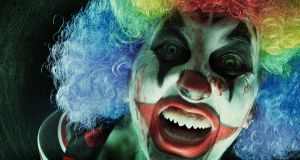 Coulrophobia is defined as an “irrational fear of clowns”. Irrational m’arse.

Imagine that the latest media hysteria concerned an outbreak of killer teddy bears or demonic bunny rabbits. After listing the incidents, reports would then work hard to explain how something so harmless was causing such panic.

One of the most interesting aspects of the “killer clown” craze is the relative ease with which people have accepted the core concept. Nobody is expressing surprise that a character now most usually associated with children’s entertainment has taken on the guise of urban demon.

Of course, clowns are scary. No cultural concept is scarier. Vampires became, in the Twilight novels, the most romantic and desirable of beings. The werewolves were a little rougher in the sack, but they still retained a rugged charm. But good luck constructing a YA fantasy around a family of eternal Clown Things.

Pinning down the origins of the current craze is tricky. The reports began in the US at the end of the summer. In late August, the New York Times reported that people dressed as clowns were terrorising citizens in South Carolina.

“A woman walking home late one night said she had seen a ‘large-figured’ clown waving at her from under a streetlight,” the paper reported. Over the following month, more sightings of scary clowns began clogging up the lower depths of news websites.

The huge shoes and distorted features should be unsettling enough in themselves, but, as the vogue moved across the Atlantic, pranksters began adding increasingly tasteless accessories to their costumes. Last week, a “killer clown” ran around Brunel University in London wielding a chainsaw. Another evil clown was seen brandishing an axe in Leicestershire.

The PSNI was forced to issue a statement on the growing menace of clown terrorism. “Please don’t get caught up in something that could jeopardise your future,” a spokesman warned potential pranksters.

Take heed. Don’t get lured by the spurious glamour of the slapstick and the collapsing car. Stick to your studies. You think those eejits with red noses and buckets of confetti are heroes, Tommy? They’re not heroes. The real heroes are . . . Hang on. How did I find myself in a 1978 radio play about the Troubles?

Another statement from David Carruthers, principal of Coleraine Grammar School, added to the unintentional comedy. “Pupil safety is paramount, and an internet search will show you that these so-called clowns are sinister in nature and completely unacceptable in a school context,” he said.

That conspicuous “so-called” – a hyphenate beloved of correspondents to newspaper letters pages – positioned clowns alongside (the inverted commas are compulsory) “punk rockers”, “teddy boys” and “Goths” in the list of cool things teachers don’t understand. Now, even I want to be a so-called “clown”.

Meanwhile, one of the few remaining benign clowns in popular culture was being forced into hiding. A spokesman for McDonald’s wept at the podium (not really) as he announced the awful news: “McDonald’s . . . [is] mindful of the current climate around clown sightings in communities and as such are being thoughtful in respect to Ronald McDonald’s participation in community events for the time being.”

What kind of world have we made for ourselves? Donald Trump walks free while a blameless promoter of childhood obesity sits lonely in his candy-striped marquee. (Somebody in the perennially right-on New Statesman really did write a column headed: “The only clown we should be scared of is Donald Trump”.)

Elsewhere, members of the clown community worried that their reputations might be ruined. “This is nothing to do with clowning; it’s to do with people hijacking a costume and for some sinister reason trying to scare people,” said Rob Bowker, spokesman for the UK-based Clowns International.

We feel for decent folk who entertain kids at hospitals with their balloon-based pranks. We also acknowledge the history of clowning that – long before the popular version became a staple of children’s entertainment – formed a key strain in European theatre. Waiting for Godot draws on that tradition. Actors such as Toby Jones, Steven Berkoff and Simon McBurney developed their considerable skills under the tutelage of the clown-friendly French actor Jacques Lecoq.

These recent events confirm, however, that the traditional circus clown is among the most unsettling creations in popular culture. The uncanny otherness of the look – the sense of something not quite human amused by our ordinariness – inspired Stephen King to create Pennywise in his epic novel It.

In Tobe Hooper’s Poltergeist, a girl’s toy clown proves more unsettling than the larger horrors that close out the film. Heath Ledger’s Joker in The Dark Knight is yet another killer clown.

Coulrophobia is defined as an “irrational fear of clowns”. In fact, there is nothing irrational about it. Get back to the Uncanny Valley, Coco.

Remembering Jimi Hendrix 50 years on: the guitar god and the Irish connection
4