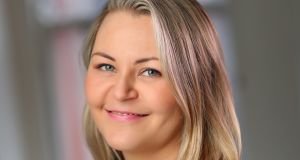 There’s plenty of fun to be had in Frances Macken’s debut novel, a lively story about a small town girl with big dreams. Set in the fictional west of Ireland town of Glenbruff, You Have to Make Your Fun Around Here vividly captures life in a close-knit community, while examining the intricacies and anxieties of female friendship. We first meet Katie, the book’s narrator, as a child, tearing around the fields near her house with her best friends Evelyn and Maeve. The depiction of the trio is relatable and evocative: Evelyn the daredevil; Katie the centrist; Maeve the one that gets in by default. As Macken highlights from the beginning, when you’re young you don’t get to choose your friends. Cousins, siblings, neighbours are really the luck of the draw.

From Claremorris, Co Mayo, the author has a BA in film and television production from Dún Laoghaire Institute of Art, Design and Technology and a masters in creative writing from Oxford. Her work has been shortlisted for national short story awards run by RTÉ and Penguin Ireland. She lives in Dublin with her husband and daughter. Her debut novel bears comparison to another recent debut, Michelle Gallen’s Big Girl, Small Town, though the latter’s prose is more finely tuned.

1 Donald Trump is in trouble, and that could spell very bad news
2 Larger retail stores to reopen on Monday ahead of schedule
3 O’Doherty and Waters ordered to pay legal costs of case against State over Covid-19 laws
4 House parties are being held ‘with abandon’, Holohan warns
5 Paddy Raff: Comedy star of the coronavirus lockdown
6 Taoiseach says €350 pandemic payment to be cut for some part-time workers
7 Coronavirus: Five more deaths brings toll in State to 1,664
8 Madeleine McCann case: ‘We assume the girl is dead’, German prosecutors say
9 Coronavirus: Ireland has higher per capita death ratio than US, study finds
10 Body trouble: How to keep actors safe while filming sex scenes
11 Strict rules on queuing as Dublin shops prepare to reopen
12 Angela Merkel sweeps in to save the euro zone
13 August the right time for primary schools to reopen
14 Irish company MyBio to sell 10-minute Covid-19 antibody test
15 Poor levels of diversity in Irish public life, Immigrant Council warns
16 Church of England distances itself from Irish language ruling on gravestone
17 Two teenage girls charged with murder of Cian English on Gold Coast
18 14 bank accounts frozen as five men arrested over links to global crime gang
19 Direct provision system not comparable with a man killed by police - Varadkar
20 Villa oasis by the Forty Foot in Sandycove for €1.95m
21 Lifting the lockdown: A new way of buying and selling houses
22 Luke ‘Ming’ Flanagan bares his bottom half to European Parliament
23 Covid-19: Limited easing of restrictions proposed as pressure grows to reopen economy
24 State’s tourism taskforce wants changes to school holidays to boost ‘staycations’
25 In six months we will be in the grip of a 1980s-style recession
26 Pandemic payment may be tapered based on previous earnings
27 Online summer camps for children and teenagers
28 Tyrone midwife on the cover of Vogue magazine
29 Property market: Is now the time to buy?
30 Normal People: Full-frontal nudity was not its most radical feature
31 A million beers await drinkers as Europe's bars reopen
32 Remote working: Ending the lunacy of pointless commutes
33 Don’t expect a bonanza for Ireland from the EU’s €750bn recovery cash
34 Cycling made easier with an Irish-made electric bike
35 Racism in Ireland: ‘‘You dirty black *****’ – I don’t want to say the word out loud’
36 Newton Emerson: Brussels playing games with Irish sea border
37 Coronavirus: Can we get a caravan park fee refund because of closure?
38 New GAA proximity study offers encouragement for return to action
39 Father Ted creator to publish spoof Dominic Cummings diary
40 Barack Obama urges those protesting in US to seize the momentum
Real news has value SUBSCRIBE