Why I Love: Michael Ondaatje’s Running in the Family

Rosita Boland on her favourite book. What is yours? Write to us at books@irishtimes.com and each week we will print one 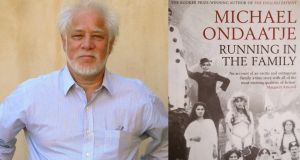 The date I’ve written in the flyleaf of my little hard-backed copy of Michael Ondaatje’s Running in the Family is 1992. Which means I bought it all of 22 years ago; a book that became on first reading, and remains ever since, my favourite book.

Michael Ondaatje; the Sri-Lankan-Canadian writer, is best known for some of his other books, particularly The English Patient, which won the Booker Prize in 1992, and was later made into a film. In the Skin of a Lion also has many fans, and I loved this too. But Running in the Family is the book I love the most, and mostly because it defies categorisation. I’m not sure if it’s even in print any more; I never see it in bookshops, and there was a time I gave it to people as gifts, although I don’t think any of them loved it as much as I did.

Running in the Family is not a novel, although part of it is fictionalised. It’s a kind of memoir of Ondaatje’s Sri Lankan family, chunks of which are clearly flagged as fictionalised, and it’s also part travel book, but you couldn’t categorise it as either. There are also several chapters that are simply poems: Ondaatje is also a published poet, as well as novelist. This probably explains why I have found this book, at various times, shelved in bookshops under the contrasting subjects of memoir, travel, fiction and poetry.

What Ondaatje is exploring in this book is the family and country he left behind as a child. He went to school in Britain when he was 11, and later moved to Canada. As an adult, he returned to Sri Lanka, to seek out both the place it had once been, Ceylon, and the long-dead family members that remained in his head. “What began it all was the bright bone of a dream I could hardly hold on to,” begins the first sentence of the first chapter. You could either say that sentence doesn’t make sense, or else see it as the motif to the rest of the book: a shifting journey of memory, imagination and reality through places both real and not.

Ondaatje spent months in Sri Lanka on two different occasions, in 1978 and 1980. I know this, because he says so at the back of the book, in the acknowledgements. He interviewed whatever family members remained, about those who were dead: “I wanted to touch them into words”, he writes. He travelled the railways his family had taken, went to the houses and race-courses and harbours they had been at. His own wife and children came from Canada and joined him for part of the time, and he walked with them in heat and monsoon, trying continually to return to a place where no one can ever go - the past. He writes about all of this through so many different filters of style that the book itself reads at times like one long surreal and impressionistic dream.

What I still love about this book is that it was the first time I realised literature did not have to be conventional, linear, have a narrative, or fit into any one pigeon hole of style. It was like learning to read all over again. It was liberation from the academic world I had so recently left. When, years later, I became a journalist, the book was and is a constant reminder that there are always fresh ways to report stories. Read it, and be startled, charmed, and inspired.

The Sound and the Fury by William Faulkner: American Ulysses