When I Hit You by Meena Kandasamy: a complex tale of abuse

This traumatic story of domestic abuse is also funny, tender and lyrical 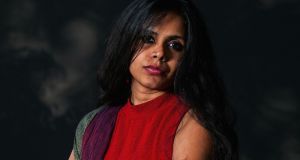 Book Title:
When I Hit You

In Meena Kandasamy’s Women’s Prize for Fiction shortlisted novel, a middle class Tamil woman is keen to point out that she has experienced no Western-approved stereotypes of Indian drama: “no incest... no Isis, no jihadi boyfriend... no child marriage”. Like the author she is a poet, journalist and a feminist; the men she knows are politicians, students who read Pablo Neruda and Susan Sontag. And the villain of the piece is an educated, cultured brute. “As far left as they came and as orthodox as it was possible to be,” he teaches postcolonial and Marxist theory. When I Hit You: Or, A Portrait of the Writer as a Young Wife – based on the author’s own experiences of marriage – is a very of-the-moment story of domestic abuse. After a courtship of mansplaining, then two weeks of marriage, the husband (none of the central characters have names, just roles) burns himself with matches until she deactivates her Facebook account.

Intellectual and physical cruelty is explored with Nabokovian ingenuity. The narrator’s husband says writing articles about female sexuality in English is pandering to “vulgar imperialist culture”. He deletes every email she has ever received to “set [her] free”. He forbids her from writing poetry about his abuse because it will create a “material basis” which their relationship cannot transcend, then writes his own dreadful poems about abusing her as his own therapy. The title of the book comes from one his poems called When I hit you, Comrade Lenin weeps. And when the narrator finally begins standing up for herself, he rapes her every night.

It’s gasp-worthy reading. Reading with the stomach. The process itself becomes precarious and unsafe, trapping you within three rooms in Mangalore. Yet it is also through writing that the only oases come. “I write letters to lovers I have never seen,” the narrator says: “to lovers I invent on a lonely morning. Open a file, write a paragraph or a page, erase before lunch”. This is her act of supreme defiance. As is telling the tale itself: though thoroughly harrowing, Kandasamy’s writing is also funny, tender and lyrical, usually simultaneously. When trauma is ever-present, the other qualities only have the option to mix with it.

But Kandamasay’s lyrical register can add a tinge of grandiosity and melodrama that the narrative doesn’t require: “I am the woman whose reputation is rusting ...Who swallows it in the sweet heat of a neat whisky and rolls it into tight joints, smoking it up in circles of regret.”

“I bring myself to believe that there can be smoke without fire, even if that smoke blinds me and makes my eyes stream with tears.” It feels wrong, almost patriarchal, to chasten writing that seeks to break its characters’ bounds. But When I Hit You itself teaches us that a message is never unhampered by the language in which it comes.

Kandasamy’s book questions the very nature of language and storytelling: the different ingrained sexisms of Tamil and English; how polite conversation has no way for sufferers of abuse to issue a “code-red”. Near the end, a male friend, having read an account of the narrator’s marriage in a magazine – based on Kandasamy’s 2012 article for the Indian magazine Outlook – asks if her husband was completely “evil” because “that’s how it came across”. Even the creation of character, with its call for complexity and roundness, is hardwired to make it difficult for a sufferer to speak out. “What do I tell people like him, who want a balanced picture ... just so that they are reminded of their own humanity?” Yet Kandasamy has given us a 3D, complex experience of abuse, full of roundly-explored characters, without compromising the purity of her message.