What is poetry? Three masters look for answers 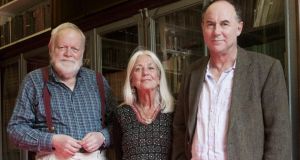 Harry Clifton, Paula Meehan and Michael Longley: to spend even a short time with these three very different poets is to experience a tiny fraction of their love of words and their finely-tuned sense of mischief. Photograph: Dylan Madden

The Ireland Chair of Poetry is a solemn, formal, academic institution. The poets who hold it, however, tend to be anything but. Gather the three most recent Ireland Professors of Poetry around a table for a conversation – the incumbent, Paula Meehan; her predecessor, Harry Clifton; and the 2007-2010 chair holder, Michael Longley – and you’ll find yourself dancing across an anarchic range of topics punctuated by recitations, jokes, snatches of song, back-and-forth banter and moments of sudden, striking profundity.

The occasion for this gathering at the Royal Irish Academy in Dublin is the publication of the first book in a new series called The Poet’s Chair. The slim hardback, One Wide Expanse, has been beautifully produced by UCD Press and contains Longley’s three formal lectures. It will be followed, later this year and early in 2016, by those of Clifton and Meehan.

Longley says he surprised himself by his choice of lecture material. “A poem can happen in about 50 seconds. There’s a poem in my second book called Swans Mating, and the second stanza just came into my head, whoomph, Like that. Now, that does not happen with prose.”

Clifton agrees. “Writing prose is so different; it’s a whole conscious, grinding thing that’s coming from another part of your mind. But it’s a wonderfully rewarding thing to see a rounded statement that is not part of the poetry.”

“It’s our profession on poetry,” Meehan says. “I would not have written those lectures if I hadn’t been given this chance, because it’s not a milieu I’m drawn to. But it is rewarding to tell essential stories about what matters in the craft.”

The professorship, she adds, is a moveable feast; each poet can make of it what they will. Her first lecture, Imaginary Bonnets with Real Bees in Them, uses the Brehon laws around beekeeping as a springboard to look at the predicament of bees and other threatened species.

Her second, The Solace of Artemis, examines the figure of that pre-classical goddess, whose totem is the bear. “It allowed me to have great fun as well as to deal with my obsessions, which are really about the endangerment of the very place we depend on, the Great Mother, the Earth,” she says.

Clifton had the outline of his three lectures in his head from the outset. “I knew it had to do with Ireland being positioned relative to three land masses that were very, very influential on its identity: the British, the European and the American. That Irish poetry had been conditioned in different ways by the flow of energy between these three different spaces, and the power relations that existed between them.”

Longley describes his opening lecture, A Jovial Hullabaloo, as an “autobiography in poetry”. Full of an infectious delight in poets and poems, it begins at Malone Public Elementary School in Belfast, where “we 10-year-olds recited aloud, as a kind of ragged chorus, David’s great lamentation over Saul and Jonathan”. The second essay, One Wide Expanse, traces the influence of the classics on contemporary Irish poetry. The third is entitled The West.

“That got me into all sorts of complicated little areas, because the Northern Irish contribution to the discovery of the west of Ireland is huge: The painters Paul Henry and Gerard Dillon – and before that the Belfast field naturalists, Robert Lloyd Praeger and RJ Welch, who was the great photographer,” he says.

The lecture format allows space for fruitful wandering, he adds. “One of the things that’s very nice about the lectures,” Clifton says, “is that they really turn out to be reveries. There’s a funny relation you have with an audience: they’re dreaming along with you. You’re not going out there with a text which is rationally going to arrive at conclusions. You’re letting your mind wander, as Michael says, over things that matter to you. They’re not logical and expository; they are dream works, in a certain sense.”

One theme that emerges is the importance of influence: the galvanising power of one generation of poets over another. For Longley that influence has ranged from the poets he encountered as a student at Trinity College Dublin – among them Brendan Kennelly and Derek Mahon – to his discovery in the past decade of the work of Walt Whitman.

Meehan cites Gary Snyder’s What You Should Know to Be a Poet: “All you can know about animals as persons . . . your own six senses, with a watchful elegant mind . . . at least one kind of traditional magic . . .

“That was the zeitgeist when I was a young one,” she says. “There was a lot of stuff coming in from the west coast of America which would have been called vaguely counter-cultural, and with that came a whole wave of poets that were important to me. Many of their gazes were to the east. So, growing up in Finglas in the 1970s, I got a lot about Buddhism through the American sensibility of the 1950s.”

“One of the great revelations to me,” says Clifton, “was the very first lecture in a general course in poetry given by Denis Donoghue. He came in – he’s about 9ft tall – and he just stood at the lectern and he read the whole of a poem called Sunday Morning by Wallace Stevens. To me that was an absolutely pivotal moment. I suddenly realised, as Mandelstam says, that the sun rises in the west. From that moment American poetry – from the very free to the very formal, conservative stuff – was an open field.”

To spend even a short time with these three very different poets is to experience a tiny fraction of their love of words – and their finely tuned sense of mischief.

Meehan chuckles. “We speak in aphoristic bon mots,” she says.

Longley snorts. “I remember I once did a tour with Nuala Ní Dhomhnaill and RS Thomas who, at that time, was Mr Wales. Someone from the BBC came, and . . . the last question was: ‘What is poetry?’ The microphone went round and we all had a go. And it came to RS, and he said: ‘Poetry . . . is the voice of God’.”

He waits for us to finish laughing before delivering his punchline. “And so it is.”

HOW IT ALL STARTED: BEING INTRODUCED TO MAGIC

In One Wide Expanse Michael Longley writes about two of the poems that “mesmerised” him as a 14-year-old: Keats’s La Belle Dame sans Merci and Walter de la Mare’s The Listeners.

“It’s a knockout of a poem,” says Longley. “He’s a hero of mine. He wrote wonderfully for children. With De la Mare, the world of the nursery rhyme comes close to the world of modern poetry.”

During his lectures as Ireland professor of poetry, he adds, he repeatedly stressed to his students the importance of reading poetry aloud.

Of chanting, really, says Meehan. “I worked for a while in Caltech, in California, and I found it incredibly easy to have conversations with the biologists, serious scientists who were investigating the effect of soundwaves on the healing of damaged tissue. A lot of what we experience in poetry, I believe, is that physical transformation.”

Longley nods, recalling a visit to Belfast by the Beat poet Allen Ginsberg. “He was dying. It was packed out. So he did a second reading for no extra charge. He had a little melodeon and he recited Robert Frost and Emily Dickinson: ‘Whose woods these are I think I know./ His house is in the village though . . . ’.”

“It’s a bottomless poem,” Longley says. “And it’s a reminder that poetry is close to song and related to dance and has f*** all to do with French literary theory.”