The Irish Times is publishing the following documents regarding the repatriation of the remains of William Butler Yeats in 1948, courtesy of the Archives of the French Ministry of Foreign Affairs and International Development in La Courneuve.

The first eight pages are a letter from the head of the French legation (ambassador) to Dublin, Stanislas Ostrorog, to Jacques Camille Paris, Europe director at the foreign ministry in Paris.  Ostrorog tells how Yeats’s son Michael sought official help in locating the poet’s remains.  Neither Michael Yeats nor  Sean MacBride, the Irish foreign minister who organised the ceremony, wanted to know the details of how the remains were collected, Ostrorog notes.  He repeatedly urges caution and discretion and says the Irish ambassador in Paris should not be informed.

The second letter, Jacques Camille Paris’s response to Ostrorog, authorises use of the foreign minister’s slush fund to finance the return of Yeats’s remains.  It alludes again to a secret, saying that the deputy director of the minister’s cabinet is the only person “aware of what you wrote to me.”

The third document, an undated report from early 1948 by French diplomat Bernard Cailloux, constitutes the strongest evidence that the remains in the coffin sent to Ireland are not those of WB Yeats.  Cailloux notes that the plot where Yeats was buried was exhumed in 1946, and that his bones were moved to the ossuary where they remained “mixed pell-mell with other bones”.  Cailloux suggests asking the local sworn pathologist “to reconstitute a skeleton presenting all the characteristics of the deceased.”

The certificate of exhumation by Dr C.G. Rebouillat says that he and the five other men who collected Yeats’s remains in the ossuary were guided by “the age, the size, the existence of an ortopaedic corset and a denture.”  He claims the identification was made “with certainty and precision” and notes that the bones were placed in a coffin which was “closed, soldered and sealed in our presence.”

Dr Rebouillat’s bill for 5,000 francs was paid from the foreign ministry slush fund.  When the Irish government later volunteered to reimburse the expense, a French diplomat wrote that the French government ought to “derive the moral benefit” of having footed the bill.

A three-page report by Geoffroy de la Tour du Pin Vercleuse, the French chargé d’affaires in Dublin, recounts with literary flair the repatriation of Yeats’s “ashes”.  It praises the “beauty” and “heroism” of Maud Gonne and her son Sean MacBride.  Despite his aristocratic protestantism, the diplomat reports, Ireland loved Yeats for his “revolutionary patriotism”.  He recounts the founding of the Abbey Theatre, Yeats’s role as a senator and the dispute over whether Yeats’s should have been given an official funeral.

Sean Murphy, Ireland’s ambassador to Paris, wrote to French foreign minister Robert Schuman to express the Irish government’s gratitude for “the homage given to (Yeats’s) memory at the moment when his remains left France, which he so loved… My government is convinced that the honors rendered on this occasion were not only destined to Yeats, but also to Ireland and the Irish people.” 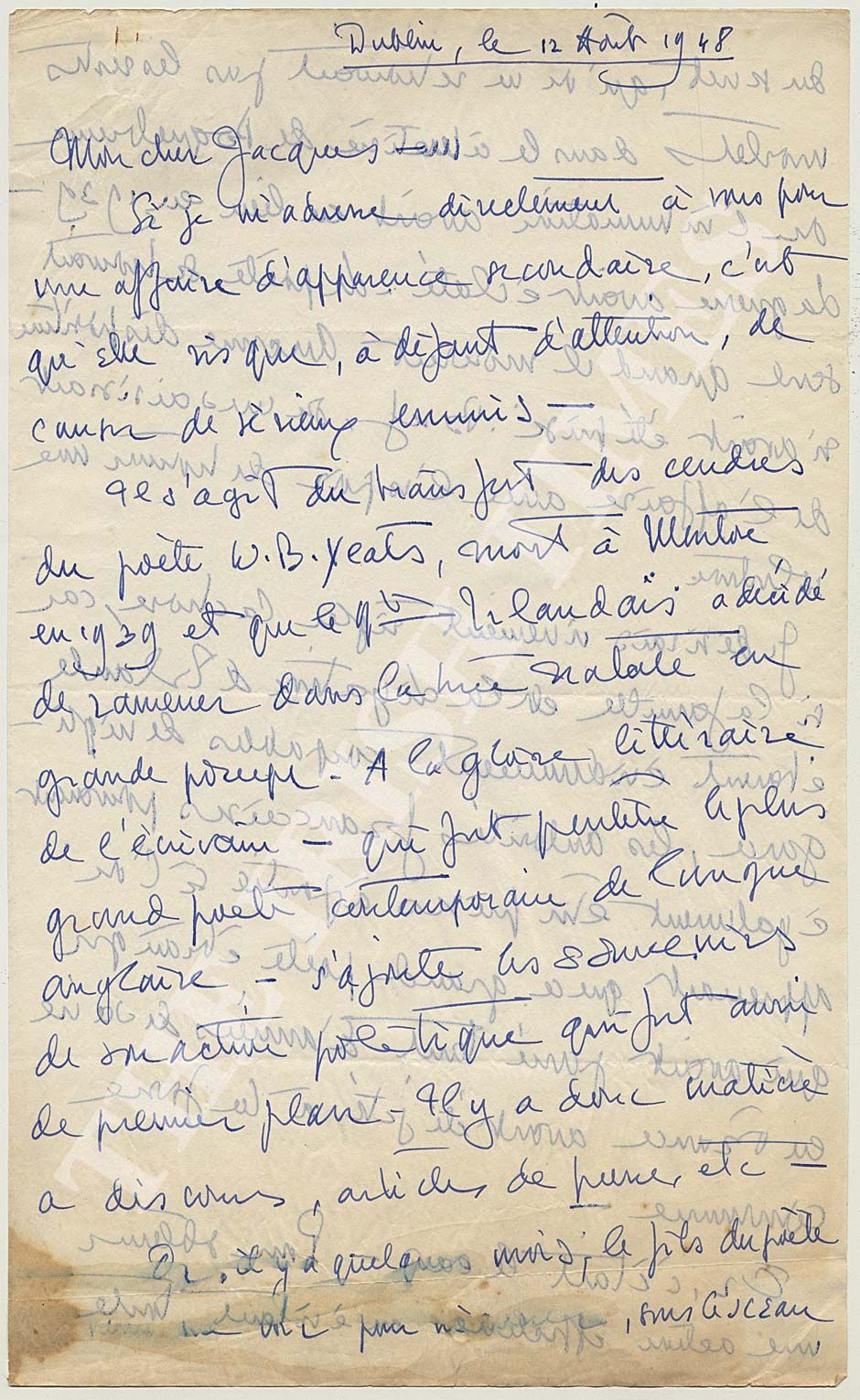 The highlighted text below reads:

I was most anxious to resolve the issue, for if the family and the Irish legation were obviously guilty of negligence, the French authorties could also be taken to task if it were known that this great foreign poet, who has spent so many years of his life in France, had been thrown into a communal grave. 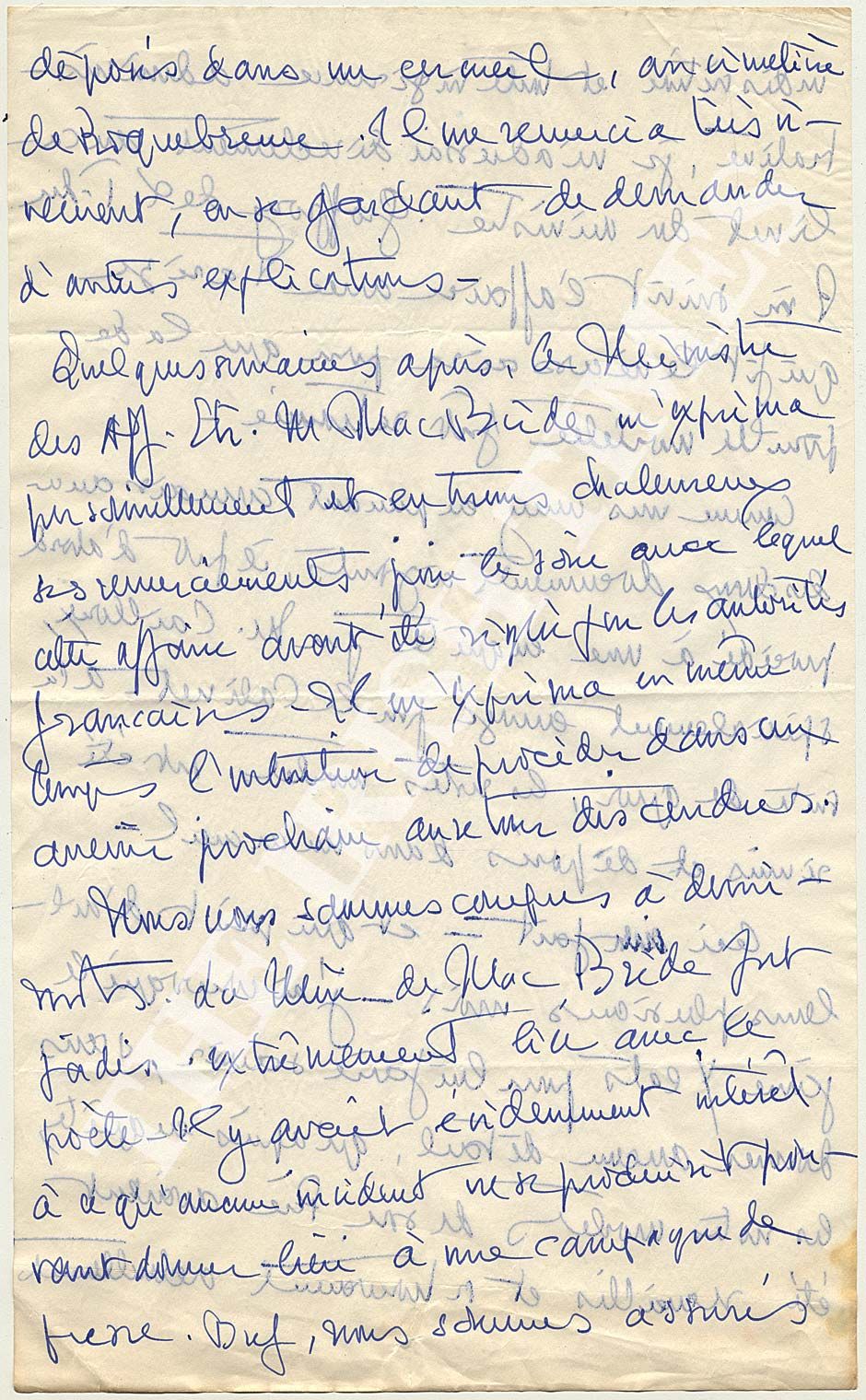 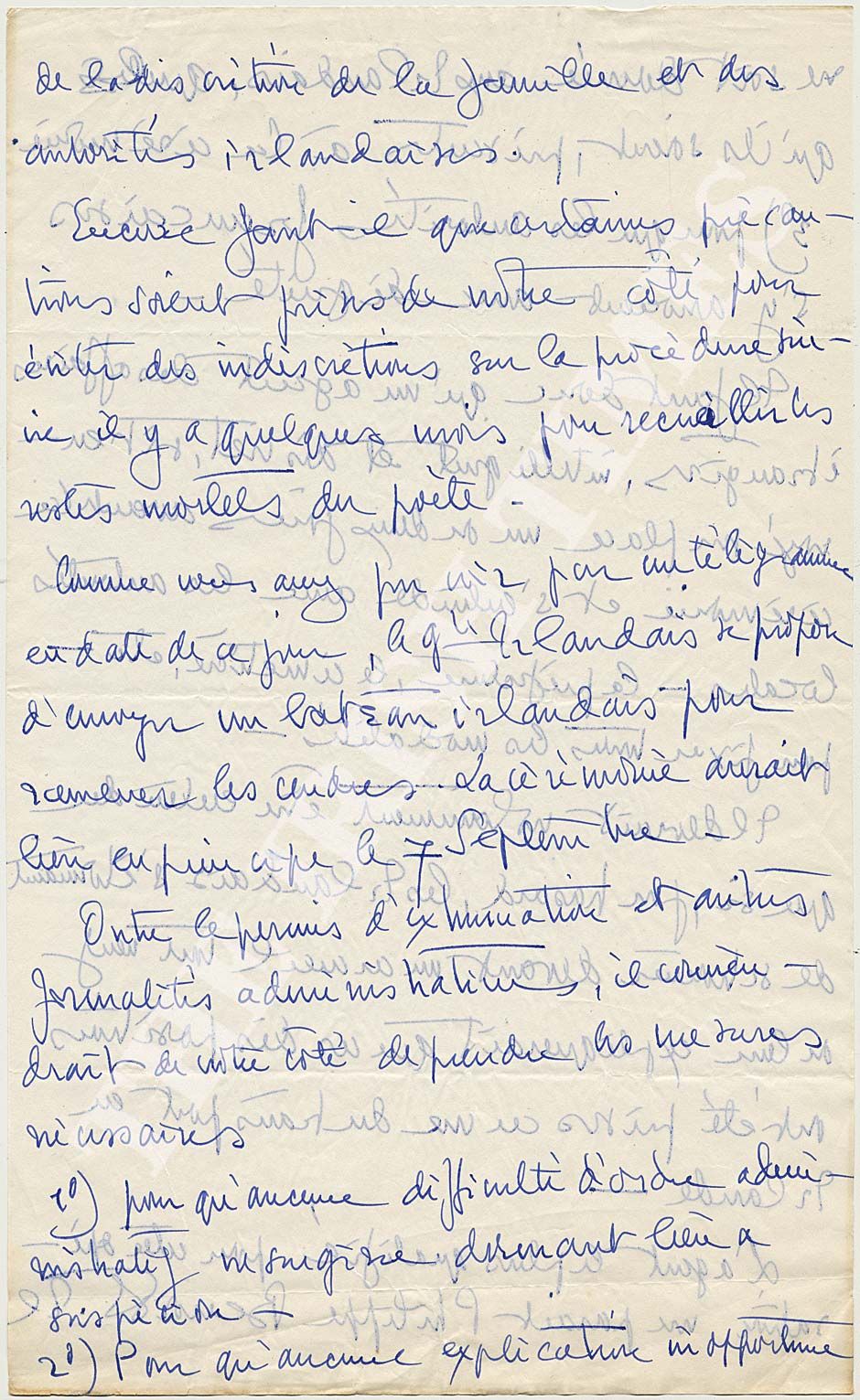 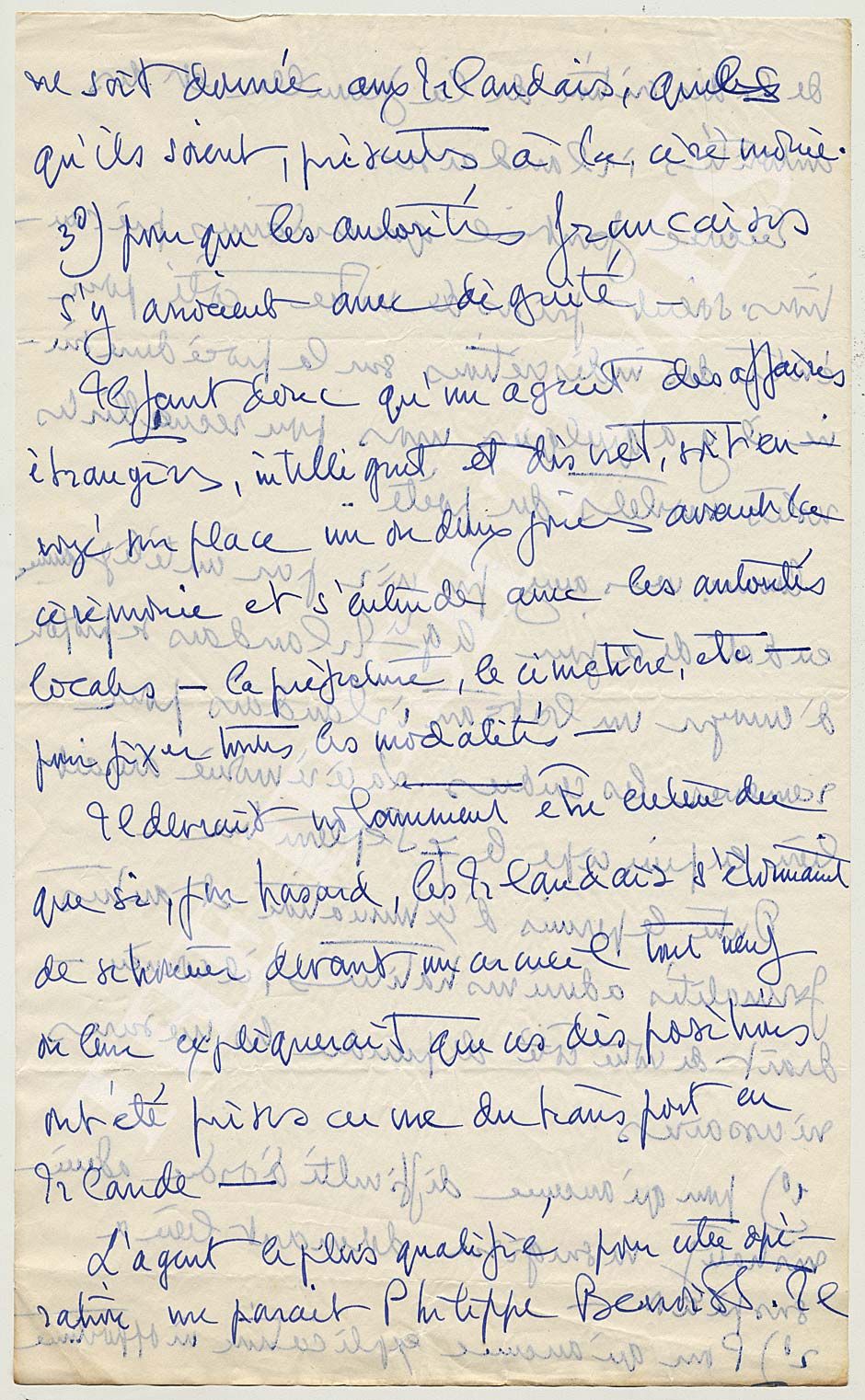 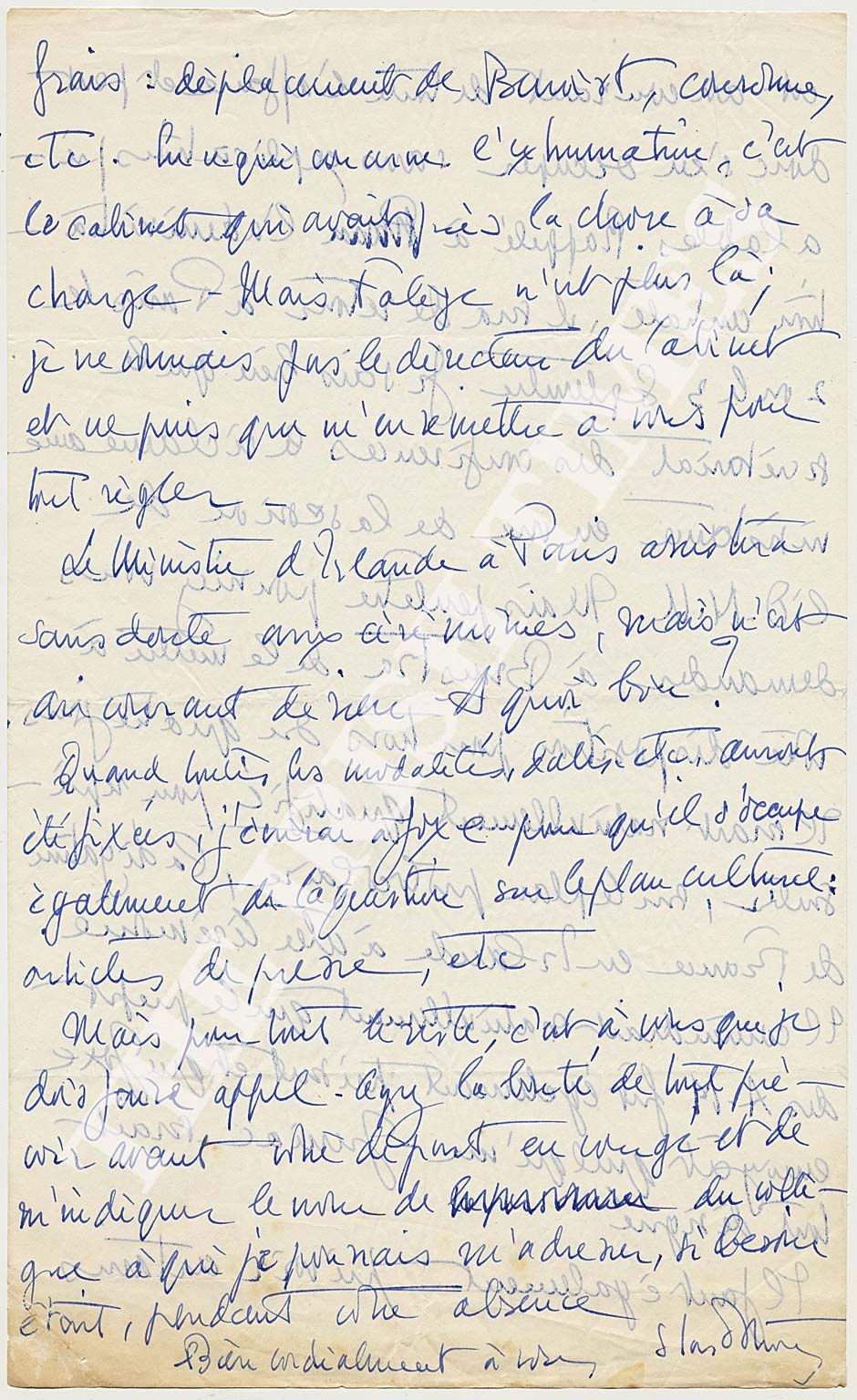 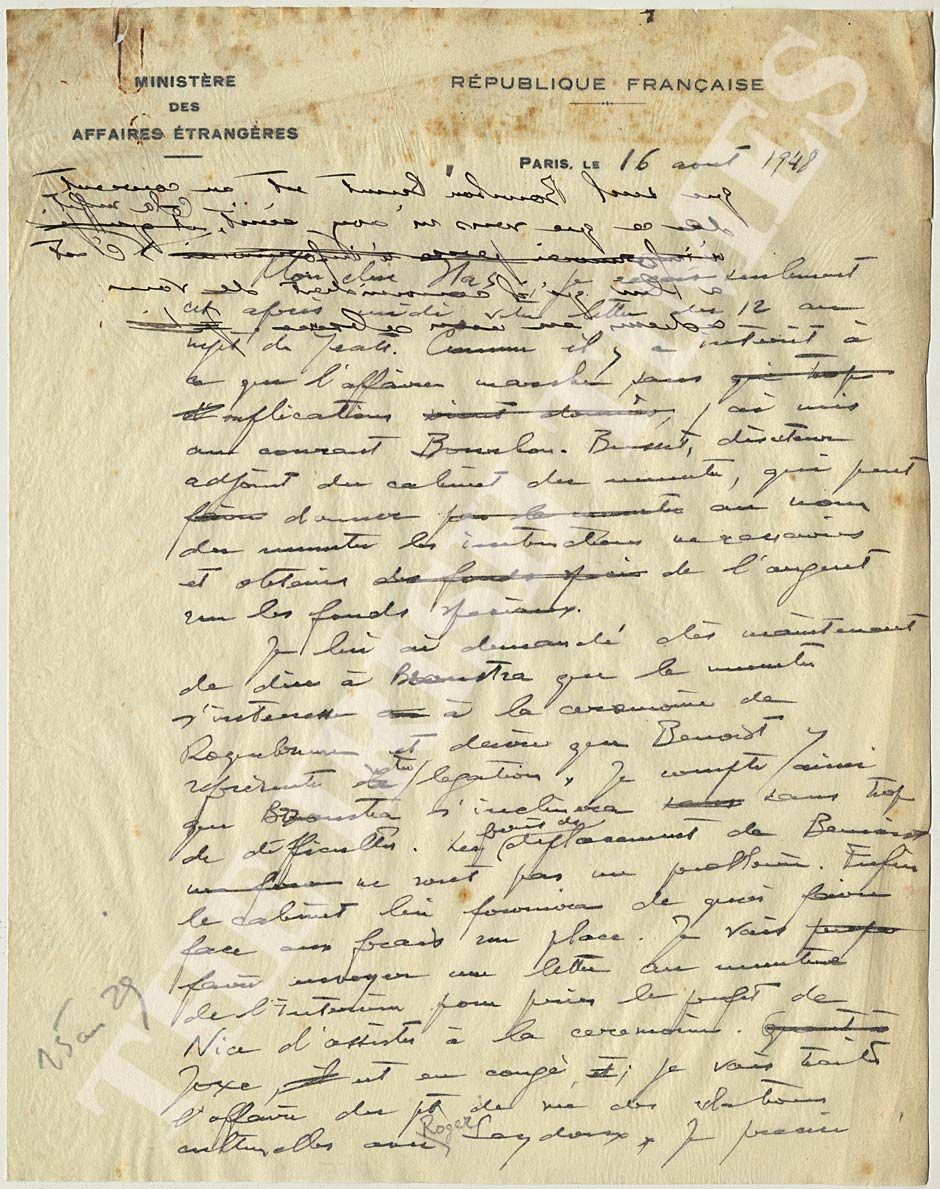 Report by Mr Cailloux, officer of the Ministry of Foreign Affairs, about the investigation to locate Yeats’s remains


On page two of the report, drawn up by the French diplomat Bernard Cailloux in early 1948, after he was assigned to investigate the possibility of repatriating Yeats’s remains.

Here is a translation of the paragraphss marked A, B and C on the lower half of the page:

A/  It is impossible to return the full and authentic remains of Mr YEATS.

B/  Subject to an investigation carried out with the family, it could be possible to return an iron corset, a skull, and perhaps a Bible.

C/  In the case that the return of these objects would be insufficient or that it would be indispensable to return a body, Mr Rebouillat, forensic doctor in Roquebrune would be able to reconstitute a skeleton presenting all the characteristics of the deceased. 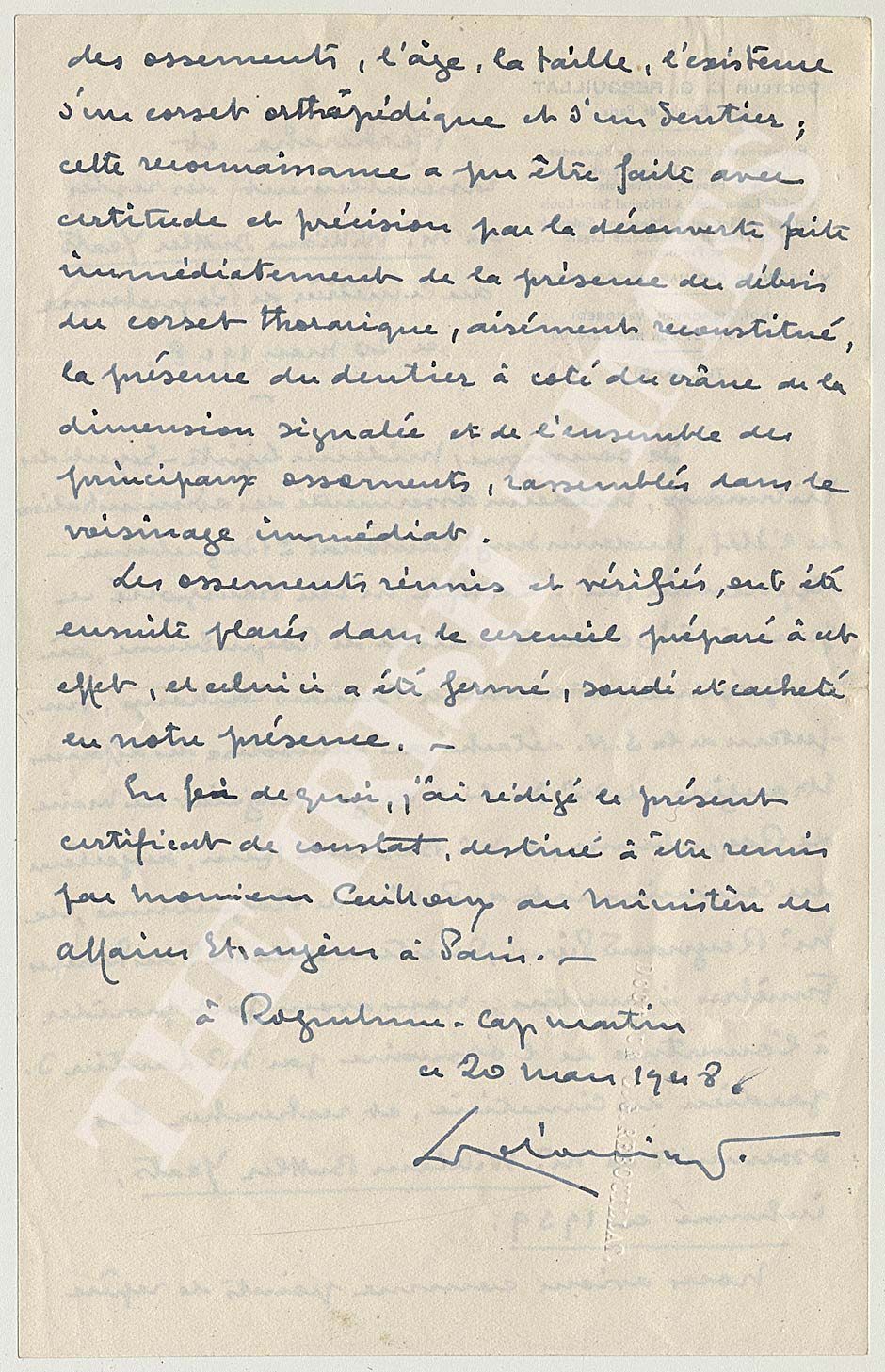 Receipt for 5,000 francs from Dr Rebouillat 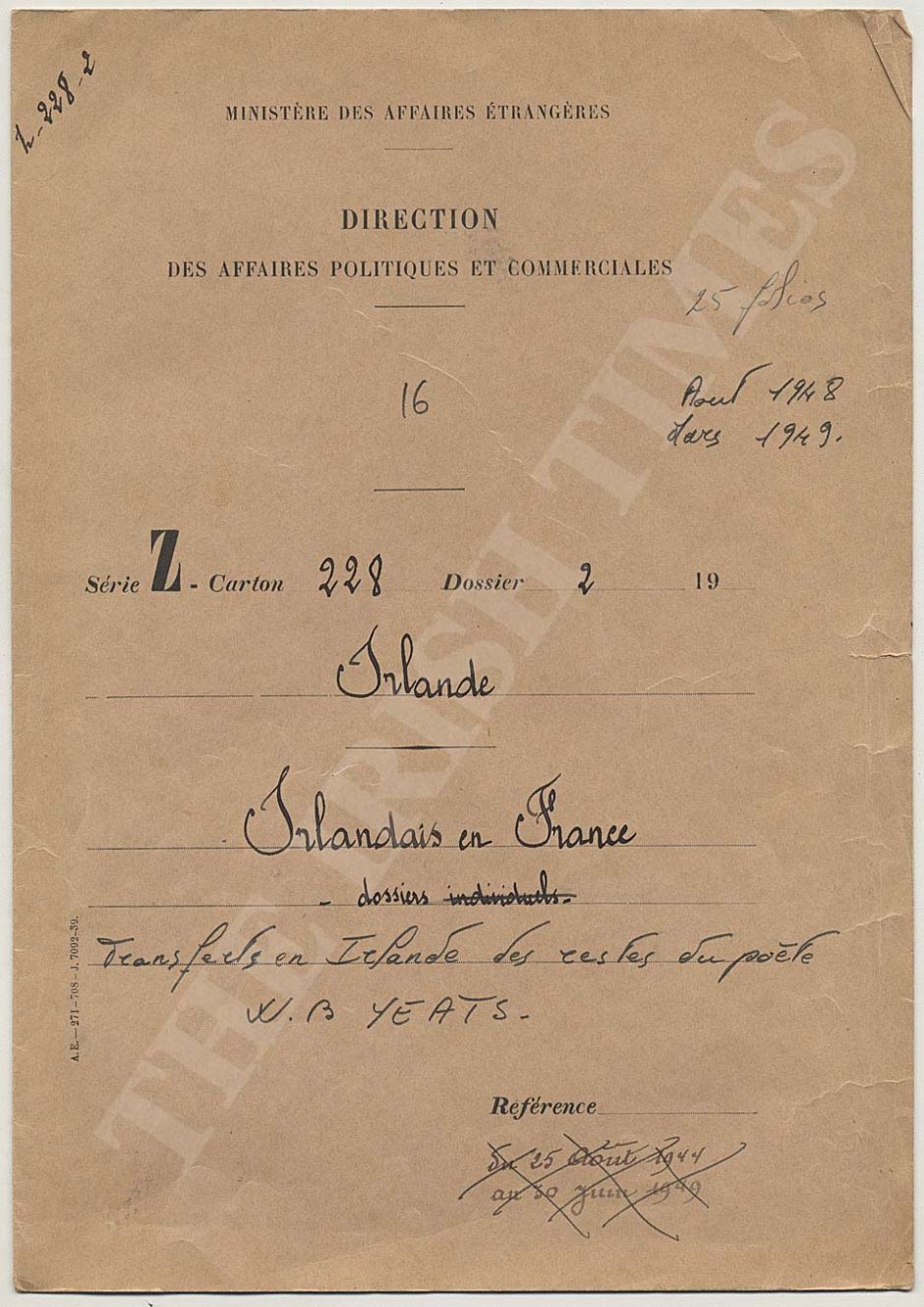 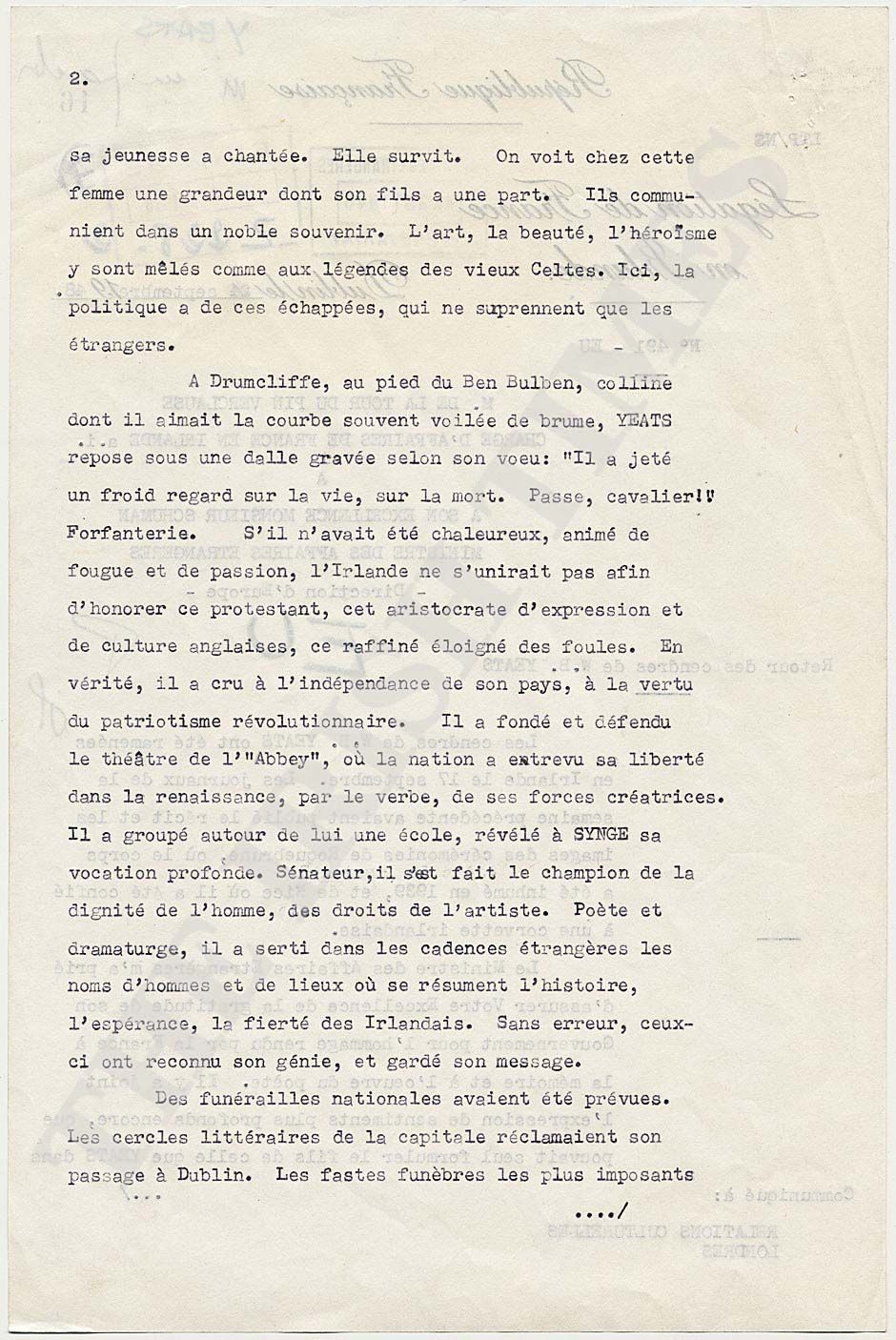 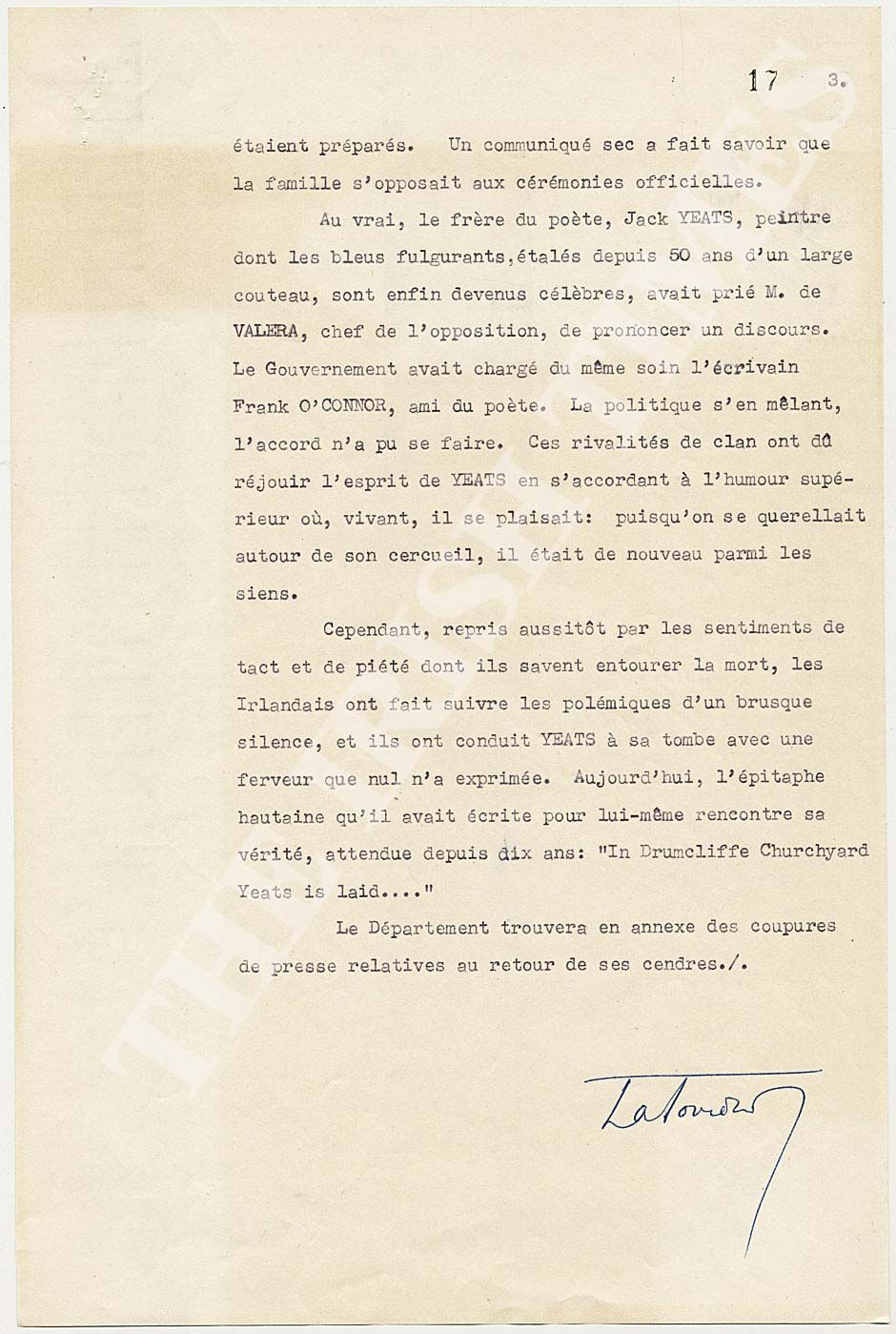 Letter of thanks from Sean Murphy, Ireland’s ambassador to Paris, to foreign minister Robert Schuman for the way France handled the repatriation of Yeats’s remains 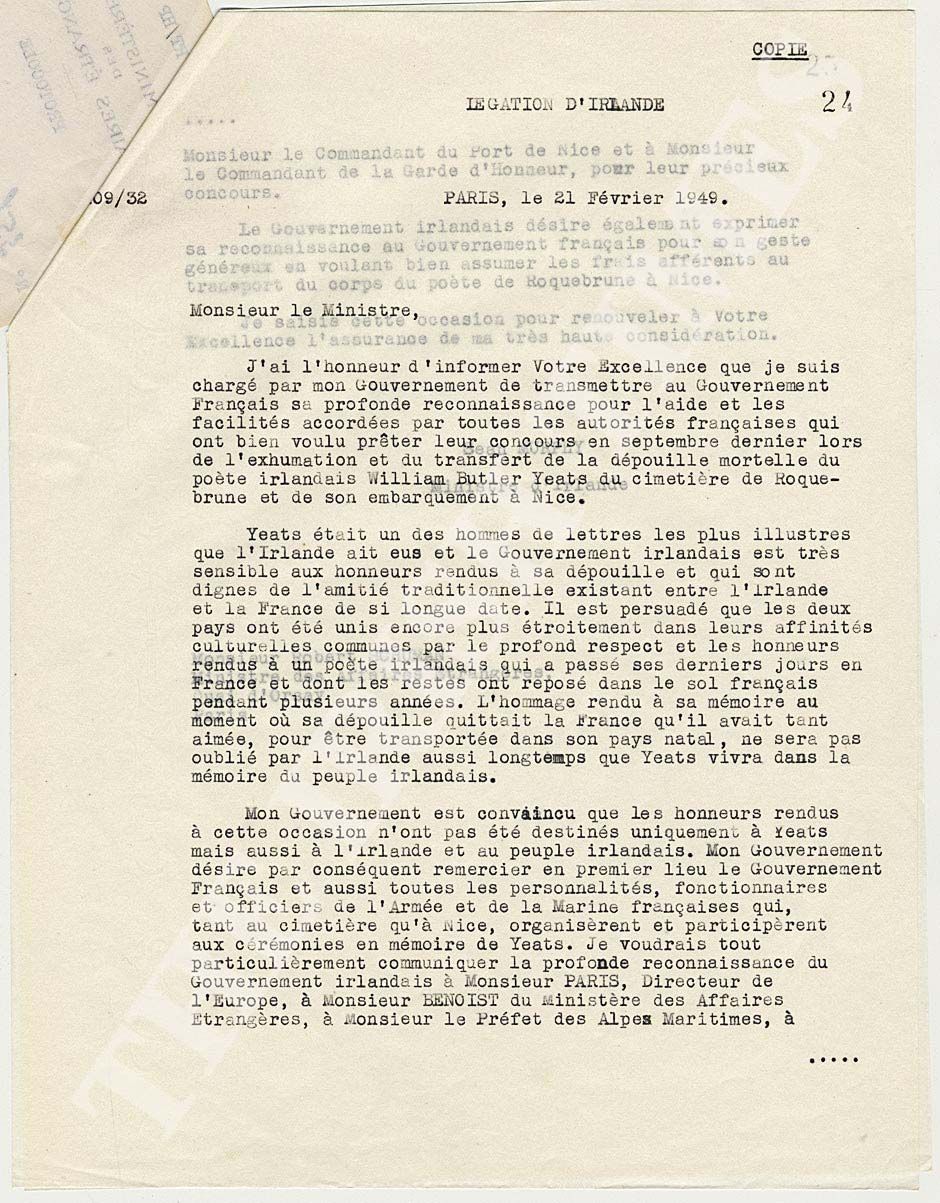 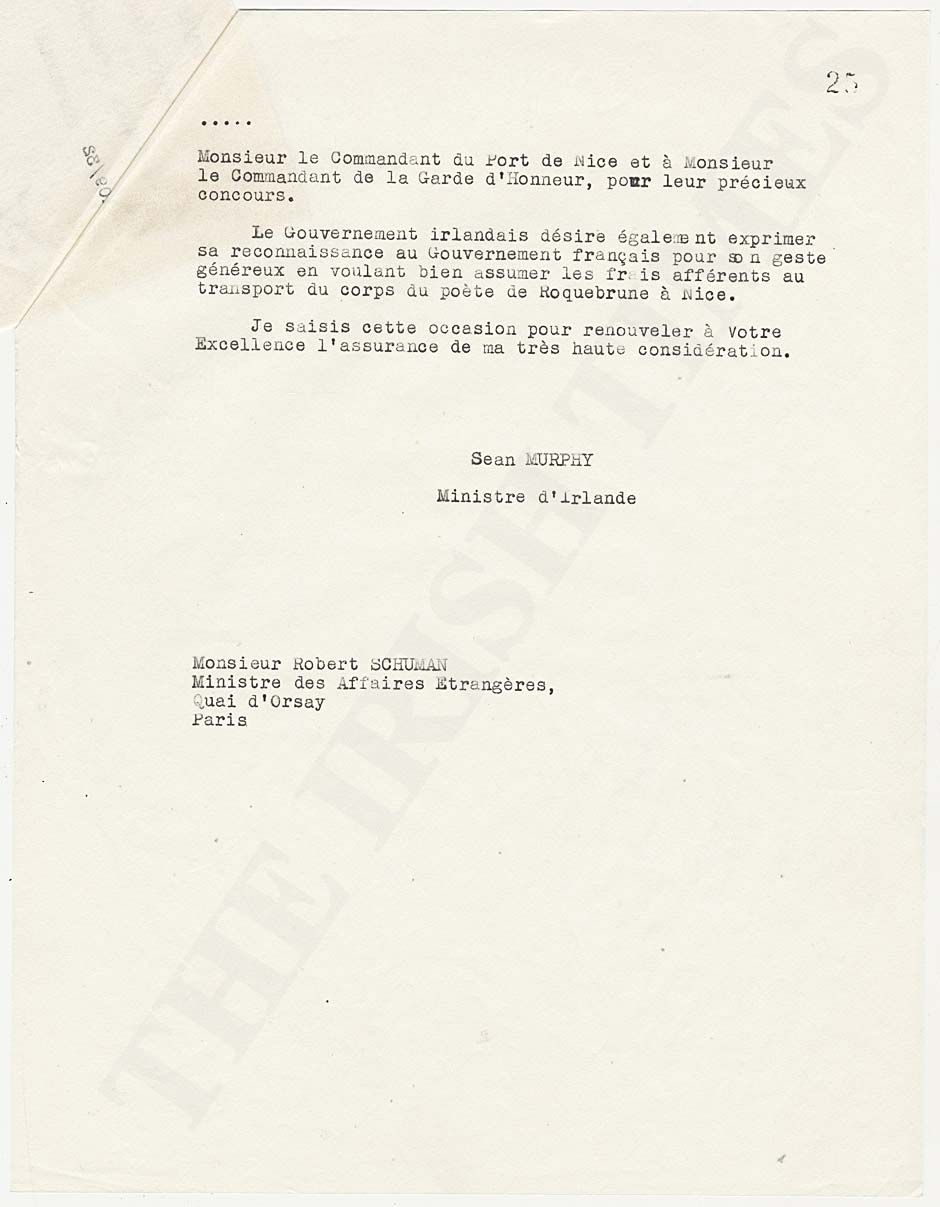