Book review: Guinevere Glasfurd’s book is of extreme weather, and is historical fiction that rhymes with the present 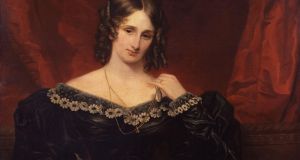 A painting of writer Mary Shelley: her portion of the book, along with those of John Constable and Sarah Hobbs, seem the most alive. Photograph: Fine Art Images/Heritage Images/Getty Images

After the eruption of Mount Tambora in April 1815, 12,000 people died on Sumbawa, Indonesia. A further 100,000 died in the following weeks across the region from starvation and disease. The resulting ash cloud meant that the effects were also felt globally: there was a sudden cooling in the northern hemisphere.

Snow fell in the summer. Floods were widespread. Crop failure, famine, epidemics of typhus and cholera, and social unrest all attended the disaster. Looking backwards through the lens of later scientific research, Guinevere Glasfurd’s novel makes this link between volcanic activity and climate change explicit, exploring the ramifications on a wide cast of characters.

1 Coronavirus: HSE braces for possible peak of Covid-19 cases in mid-April
2 Irish flight bringing PPE from China arrives in Dublin
3 Coronavirus: Man who allegedly spat at garda brought to court by gardaí in protective gear
4 Maureen Dowd: Coronavirus has made a national shrink of Andrew Cuomo
5 Coronavirus: ‘Last time I saw her was when she was put into the ambulance’
6 If you think governments are spending money now, just wait
7 No-stress coffee traybake works every time
8 Coronavirus: World’s oldest man marks 112th birthday in isolation
9 Coronavirus: Ireland suffers highest daily death toll
10 Coronavirus: Spain’s death toll rises by record 838 overnight to 6,528
11 Coronavirus: Smartphone app to facilitate contact tracing to be rolled out, HSE says
12 Isolation on the Wild Atlantic Way: ‘I stopped here for the day – and never left’
13 Coronavirus: Older people who leave houses may be asked to go home - Harris
14 David McWilliams: We need to totally reimagine economics
15 Man (30s) assaulted by group at supermarket in North Co Dublin
16 Late Late Show with Miriam O’Callaghan: The most surreal primetime TV I’ve ever watched
17 Coronavirus: Government publishes list of essential services
18 Coronavirus: ‘We are not here to go and hide in the Garda Station’
19 Coronavirus: 14 more deaths as list of essential workers published by the Government
20 Dublin software company Workhuman ‘on course’ for €1bn valuation
21 Trump abandons quarantine proposal as coronavirus spreads
22 Remote working doesn’t suit everyone, and it exposes woolly leadership
23 Homeless in the Covid-19 era: ‘We all feel a bit queer, clammy, fluey’
24 Benign impact of Covid-19 on air quality and carbon emissions
25 Virtual viewing: A guide to visiting museums online in the age of Covid-19
26 Russia closing its borders as Covid-19 numbers accelerate
27 A bean burger from the cans at the back of the press
28 Fintan O’Toole: We are learning how much we rely on low-paid workers
29 Coronavirus: Six more deaths in North as sweeping powers come into force
30 Volunteers use online forum to mind children of healthcare workers
31 Coronavirus: The list of businesses allowed to stay open under new measures
32 The chickpea stew that broke the internet in the US is here. Give it a go
33 Coronavirus: Construction sector most significant part of new shutdown
34 Coronavirus: Oxygen equipment meant for Ireland held back by Italy
35 Irish writers on Covid-19: ‘We’re all having a shockin’ dose of the wombles’
36 North Korea in flurry of missile launches amid pandemic
37 Leading Northern Ireland lawyer in critical condition because of coronavirus
38 Gardening for beginners: How to sow and grow for the first time
39 Cultural landscape on the other side of the pandemic will be very different
40 Cliff Taylor: A big recession is coming but it’s not a rerun of 2008
Real news has value SUBSCRIBE