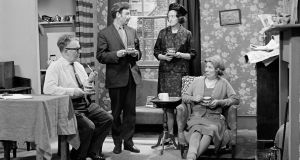 A scene from the RTÉ Television drama series Tolka Row, during studio filming in 1967. From left to right; John McDarby as Gabby Doyle, Des Perry as Jack Nolan, May Ollis as Rita Nolan and Iris Lawler as Statia Nolan-Doyle. It ran from January 3, 1964 to June 7, 1968.

Across the Irish Sea we know from Philip Larkin that “sexual intercourse began in 1963, between the end of the Chatterley ban and the Beatles’ first LP”. While they were writing about it, singing about it and actually doing it over in Britain, there was no such carry-on here. Between the Catholic Church having a Taliban-like grip on people’s morality and a climate where even the use of the term “unisex” was deemed risqué, 1960s Ireland was monochrome and monolithic.

But as cultural historian Damian Corless illustrates in this fascinating and eminently readable account of all our yesteryears, the light of modernity was breaking through and de Valera’s ice-age was melting.

But it is salubrious to reacquaint ourselves with just how degenerate our social and cultural affairs were no more than half a century ago. “Homosexuality is as much a sickness as measles, and need proper treatment”; “through the means of physical training the child is disciplined so that he may be better fitted to fulfil God’s plan” are among the official strictures quoted from here, as well as a reprinting of an Inter Cert exam from 1967, marked “For Girls Only” which asks students “To write detailed instructions of the care and cleaning of (a) a Kitchen sink, (b) a Waste bin, (c) Kitchen cutlery, (d) Glassware and (e) Outdoor shoes”.

While all this could be played out with a straight face, Corless opts for an impish and irreverent approach: not just relying on official records and studies, he rummages down the sofa of 1960s Ireland to find gems such as the young female journalist who, asking for advice on how to break into the profession, is informed that becoming “a beauty editor of a fashion magazine” is something she could aspire to.

Delightfully, the “inauguration” of the first escalator in the country – which took place in March, 1963 within the hallowed halls of Roches Stores on Henry Street – is described as being “like the Funderland of it its day”.

Because the arrival of the television here opened the windows of the world to us, it was viewed by both the political and clerical hierarchy as potentially as troublesome as Communism. The Knights of Columbanus were particularly appalled by citizens in multi-channel land having free and easy access to Coronation Street; the home-grown soap, Tolka Row, was castigated for not “cherishing and supporting family values” and also, being urban, for alienating the farming community.

There is also the interesting fact that ITV’s Emmerdale was directly modelled on RTE’s The Riordans.

A chapter devoted to how 1960s parents dealt with talking about “you-know-what” with their children would send a shiver up your spine, while you’ll have to read for yourself why the intriguingly entitled notion of “celebrity tonsillectomy” was such a pressing issue for Irish doctors in the 1960s.

Similarly, the reason why Jackie Kennedy was abruptly replaced as the “ideal role model for young Irish women” by Bernadette Greevy is contained here.

The arrival of the Supermarket and the Shopping Centre into Ireland at such close proximity were also direct assaults on prevailing mores and there was the amusing sight for the first few years of Irish shoppers being seen with mesh shopping baskets on the streets of the towns and cities for the simple reason that shoppers didn’t know they were supposed to put them back.

Expertly researched and written with droll and deft touches of humour, this cultural cornucopia will shock and surprise as much as it will amuse. For the generation who were foot soldiers in these cultural wars, this book will have a special resonance but it is composed and arranged in a way for all to savour and relish.