The True(ish) History of Ireland, by Garvan Grant 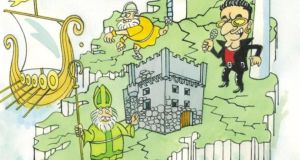 The key motors of mirth in this amusing book are potatoes, rocks and snakes. In his cod run through Irish identity, Grant hurls these gently at our ancestors, ourselves, the English and salient events. Anachronism is a frequent technique, as he pipes back a modern concept or person to facilitate lampooning. St Patrick foils Ireland’s chances as a snake sanctuary. The Viking invasion is feared as another stag party. History is so violent some get their heads cut off twice. Illiteracy links Holyhead and Hollywood. Talk is a tool of war. Newspapers from 1829 refer to Daniel O’Connell as “Ireland’s answer to Lincoln, Gandhi and Mandela”. In the 1970s, some natives maintain the North and the Troubles are in the Middle East, while moral protectionism leads to a ban on Scandinavians. Gerard Crowley’s cartoons support the general jokery: one shows the Titanic about to crash into an Iceberger. This book eschews venom and danger in favour of good-natured, old-school humour.