The Story of the Lost Child by Elena Ferrante review: a feminist epic

The fourth and final novel in Elena Ferrante’s Neapolitan quartet is frustrating and exhausting, but also haunting thanks to her tragically insightful protagonist – who is not the actual narrator 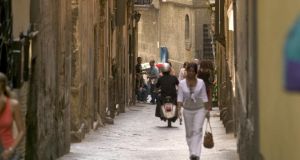 Book Title:
The Story of the Lost Child

Late in The Story of the Lost Child, the closing pages of Elena Ferrante’s four-volume domestic saga about Italian women over the past half-century, the narrator makes a concession.

“There are moments when what we place on the edges of our life, and which, it seems, will be in the background forever – an empire, a political party, a faith, a monument, but also simply the people who are part of our daily existence – falls down in an utterly unexpected way, and just as countless other things are pressing upon us. . . .

“For a long time it seemed to me that I was like certain figures in novels and paintings who stand firm on a cliff or on the prow of a ship in the face of a storm, but it doesn’t overwhelm them and in fact doesn’t even touch them.”

The statement contains one of many truths in a defiant novel replete with harsh realities. Yet, interestingly, most of these insights are offered, delivered, insinuated and at times hissed tauntingly, not by Elena, the narrator, but by the book’s presiding genius, Lila.

It is Lila, angry wild child grown into doomed beauty and self-destructive seer, a factory worker, later a computer expert, and eventually a bereaved mother, who steers this narrative. Her experiences resonate in the way Jean Rhys’s characters claw at the heart.

Ferrante’s narrator is merely a watchful onlooker. Elena’s real task is not one of recording; she is engaged in self reinvention and justification. After all, it is Elena who at the beginning of the second volume commits an unforgivable offence: she destroys a box containing the eight notebooks into which Lila entrusted her private thoughts.

Lila’s mind is a fabulous place; she shares Zelda Fitzgerald’s flair for tragic insight, and her presence consistently tempers the soapily operatic interludes of an overblown work.

Ferrante is so exhausting to read in one go not because of her intensity but because of her lack of humour. Robert Musil’s wonderful if unfinished The Man Without Qualities (1930-1943), say, is far easier to read and reread. Ferrante’s narrative voice is as relentless and as self-absorbed as is that of the openly autobiographical novels of Karl Ove Knausgård. But Knausgård is often very funny.

Both Ferrante and Knausgård write in a conversational tone, but the latter’s narrator is laconic where the former’s is astute, driven and forensic. Elena’s expectations are demanding and her actions shocking, and her obsessive resentment of Lila distances her.

Lila is indeed a terrifying creature to behold, yet her contradictions are intriguingly wayward. Elena is too cold, too calculating. “I feel no nostalgia for our childhood: it was full of violence.”She never forgets she is the working class daughter of semi-literate parents. Elena perseveres in her studies, but never gives the impression that her education gave her any pleasure. Vindication is the best she can hope for. Even writing the saga is undertaken at the outset to thwart Lila, who has disappeared.

Elena’s career as writer within the novel is at best hastily outlined and never that convincing, as she is more preoccupied by her relationships and the difficulties of being a mother. This wary woman is difficult to like. Everyone, particularly every woman, is sized up and evaluated.

Elena’s ambitions are matched by her social and sexual insecurities. Most of all, though, she is defined by her friendship with Lila, although it is far more of a volatile rivalry. Elena, determined and disciplined, envies the sheer daring of Lila, who is more intelligent, more seductive, more dangerous, far more vulnerable, elusive and ultimately more real

Also important is the political momentum that drives Ferrante’s extremely violent novel, largely set in what seems one of the toughest parts of Naples. The background is busy with scandals, crime, family and sexual betrayals. Many of the characters are murdered. It is about economics as much as postwar ideology. Unions, hit men, political corruption and poverty are all evident.

The sexual politics are extraordinary. Girls are wooed by men who, once they become husbands, take to beating them as they themselves were struck by their fathers. Elena’s Naples is a menacing place. Young women watch as their mothers become desexualised and in turn the same thing happens to them. Everyone is a mercenary.

The ambivalent “friendship” upon which the story revolves is sustained by suspicion and jealousy. It is best symbolised by two dolls, one owned by Lila and one by Elena. They were tossed into a basement when they were children. It was instigated by Lila, of course, who threw Elena’s doll down; Elena, ever the follower, returns the favour.

It is tough. Lila is clever yet leaves school to work and is married by 16. Elena battles on. Intent on self improvement, she is goaded by her jeering mother and sets out to have sex on Lila’s wedding night.

Sexual compromise dominates what is a feminist text. Ferrante appears more drawn to passion than to love, and Elena’s narrative suggests that no passion can survive cohabitation – never mind marriage.

Into the final 470 pages are crammed some 30 years and more drama. Elena, having left her respectable and boring marriage, sets up with Nino, who is a cardboard devil. He tempts her; he taunts her. Most of all, he attempts to attribute his philandering to being “of nature, of astral matter, of spongy bodies and their excessive liquids, of the immoderate heat of his loins – in short of his exorbitant virility.”

As Ferrante has created a narrator who is by nature analytical and intent on description and explanation, there is an element of repetition. The reader comes away from this volume capable of answering questions about each of the preceding books.

As her relationship with Nino finally collapses, Elena returns to her writing and exhumes a novel that had been dismissed by her early champion, her then mother-in- law. Lila also told her at the time that the book was poor. It is risky, yet the long-forgotten manuscript excites an editor, who informs Elena that the novel is harsh – “I would say masculine but paradoxically also delicate.”

He could well be referring to the whole Neapolitan saga. The resurrected novel is met with favour, but it also attracts the hysteria of those who accuse Elena of exploiting the neighbourhood.

Ferrante’s vision is candid and fraught. She does not shape beautiful sentences; she articulates painful sensations and exposes nerve endings. Midway through The Days of Abandonment (2002), I began to struggle; it was an effort to reach the end.

This four-volume novel, which I had avoided until now, is even more demanding. Its thesis could well be the divided self. Ferrante is exploring the essential difficulties of balancing duty and desire; fantasy and reality. It is a story full of shouting and seething. The most enduring image could well be that of Lila, alone and defeated, having searched for Tina, the lost child.

Lila “sat beside the kitchen window and didn’t move for a long period, even though from there you could only see a slice of the railroad and a little sky. Then she pulled herself together . . . the years washed over her, her nasty character got even worse, she sowed uneasiness and fear, she grew old screeching, quarrelling.”

Ferrante is no Balzac or Dickens or Trollope; she is not Zola or Tolstoy. Her narrator does not have the storyteller’s wider vision. Unlike War and Peace, Ferrante’s big book has a narrow lens, and her idea of friendship is more about shared experience than affection. A 19th-century writer would have told the story through the third person voice. Elena is informed that Lila hates her. Often their dislike is mutual.

Still, it is worth battling through all four volumes of this strenuous saga to encounter Lila, and to observe a character evolving and enduring within a world she has chosen.