The State of Secrecy: Decades of British bungling and cover-ups 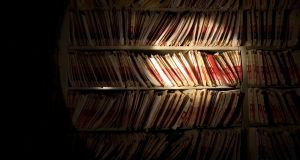 For decades the bedrock of the British state’s addiction to secrecy was the 1911 Official Secrets Act. Photograph: Dave Whitney/Getty Images

Book Title:
The State of Secrecy

Official secrecy is a very British disease, used as much to cover up incompetence and bungling as it has been to hide state secrets. That is Richard Norton-Taylor’s thesis and, my goodness, there is considerable evidence for it.

When it comes to matters of defence and security Norton-Taylor is probably Britain’s most perceptive, persistent and best informed commentator. He has been a Guardian journalist for more than 40 years and for most of that time has focused on lifting the veil of secrecy that envelopes so much official activity.

Unlike many of the more excitable members of his profession, however, he has avoided sensationalism and observed a scrupulous regard for the evidence with the result that he is respected on both sides of the divide. He wears with pride the suggestion by one former senior official that he was “a long-term thorn in the side of the intelligence establishment”.

For decades the bedrock of the British state’s addiction to secrecy was the 1911 Official Secrets Act which was wafted through the House of Commons without debate. The Act’s notorious Section 2 outlawed unauthorised disclosure or receipt of any information by any government official whether or not it was officially classified.

What I have set out to do . . . is to expose the mindset which encourages the fetishisation of official secrecy

Not until 1989, in the wake of a series of scandals against which the 1911 Act had proved ineffective, did the government decide to review the legislation, but only with a view to making it more effective. Although narrower in scope, however, the 1989 Act was still capable of being deployed to stifle legitimate debate. An attempt to insert a public interest defence was rejected.

Meanwhile, it was becoming clear that Britain’s much vaunted intelligence and security services, operating behind a wall of secrecy and unaccountable to either parliament or the government, were serially incompetent. Senior members of M16 were found to be working for the Russians.

Parts of M15, consumed by paranoia, appeared to be paralysed by infighting and targeted individuals and organisations engaged in legitimate political activity. There was also the difficulty that British membership of the EU required the spying activities of member states to be placed on a legal footing. All this increased public pressure for the agencies to be made accountable.

The result was a series of Acts of parliament which for the first time acknowledged the existence of the agencies and setting out, at least in theory, the limits of their remit. It was not until 1994 that any form of parliamentary accountability was established. The Intelligence Services Act established a committee of senior parliamentarians to oversee the work of the agencies.

In just about every case, whenever questioned by outsiders, the tendency has been to cover up

For the early years of its existence, however, the committee lacked the power to insist upon the co-operation of the agencies and the resources to properly investigate. It was also appointed by and reported to the prime minister and not to parliament. Some of these shortcomings were corrected in 2013. Even now, however, it remains hobbled. Witness that the government has so far refused to publish its report into Russian interference in UK elections.

The limits of public scrutiny quickly became apparent in the aftermath of 9/11 and the subsequent invasions of Iraq and Afghanistan. Although it was clear from an early stage that M16 had misled the government about Saddam Hussein’s possession of biological and chemical weapons, the Whitehall establishment fought for years to avoid the setting up of an official inquiry and, when one was eventually set up, they fought to prevent it from seeing all the evidence.

Similarly, an inquiry by the Intelligence and Security Committee into the involvement of British agents in the torture and rendition of alleged terrorists to a network of secret prisons set up by US allies was obstructed at every turn and many lies were told. It was 16 years before the truth emerged.

Norton-Taylor documents this sorry story in detail, but the most gripping chapters concern the ministry of defence and the British armaments industry. A decades-long tale of billions of pounds of taxpayers’ money wasted on bungled procurements, massive overspends on out of date weapons systems and collusion in the sale of weapons to tyrannies, not to mention the abuse of Iraqi prisoners and the systematic bullying of young British soldiers.

In just about every case, whenever questioned by outsiders, the tendency has been to cover up. All this compounded by the tendency of ministers, MPs and some journalists to roll over and have their tummies tickled whenever anyone in high places breathes the magic words “national security”.

“What I have set out to do,” says the author, “is to expose the mindset which encourages the fetishisation of official secrecy.” Indeed he has. And he has succeeded brilliantly.

Chris Mullin is a former Labour minister. His latest novel, The Friends of Harry Perkins has recently been published in paperback