The Romanovs, 1613-1918 by Simon Sebag Montefiore review: mayhem and trivia 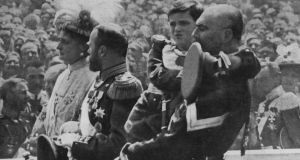 The last Tsar of Russia Nicholas II (centre) with his wife Tsarina Alexandra and their son Alexis (being held by a Cossack) during celebrations at the Kremlin to mark the Romanov family's 300 years in power. (Photo by Henry Guttmann/Getty Images)

Simon Sebag Montefiore made his name as a historian with Stalin: The Court of the Red Tsar (2003), a compelling account of life in the Soviet dictator’s inner circle. In that book, Sebag Montefiore showed that Stalin was as charming as he was fearsome, a dictator whose rule relied as much on loyalty as it did on terror. Much the same could be said of the Romanovs, the autocratic dynasty that ruled Russia for more than 300 years.

Stalin was fascinated by the tsars and spent a considerable amount of time personally correcting Soviet textbook accounts of their history. But contrary to Sebag Montefiore’s assertion, Stalin did not measure himself against the Romanovs. Rather, he measured the tsars against his own rule and found them severely wanting for failing to secure Russia’s borders or to catch up and overtake the West economically. Stalin also despised the tsars’ modish subservience to foreign influences and advisers.

Sebag Montefiore has a lot more time for the tsars than did Stalin. His appraisal of the strengths and weaknesses of the Romanovs is balanced and judicious. They were tyrants, some more bloody than others, but they had their redeeming features. Charged with governing a huge and unruly country, the tsars faced real dilemmas and had to make hard choices. The best of them had significant achievements to their credit.

The 30-year reign of the first Romanov tsar, Michael I, helped to stabilise Russia after the upheavals of the “Time of Troubles” that followed Ivan the Terrible’s death. The greatest of the tsars, Peter I (1682-1725), turned Russia westwards, established it as a great European power, rationalised its government, and began modernisation. In the 18th century Catherine the Great continued Peter’s policy of expansion and occupied “New Russia”, the epicentre of the continuing civil war in contemporary Ukraine. Catherine also sponsored a Russian version of the Enlightenment; indeed, it was Voltaire who popularised her appellation as “the Great”.

Alexander I defeated Napoleon and led his troops triumphant into Paris, a feat that rankled with Stalin, who managed to get only as far as Berlin. Alexander II, the Liberator, faced down his own aristocracy to emancipate Russia’s serfs in 1861, the beginning of the end for the Romanov dynasty, whose power had always been based on its alliance with the Russian nobility. His reformist credentials notwithstanding, Alexander II survived five assassination attempts before finally succumbing to a radical’s bomb in 1881. His successors, Alexander III and Nicholas II, were determined to maintain tsarist autocracy, if necessary by repression, but even they strove to modernise Russia economically and culturally.

The success of Sebag Montefiore’s Stalin book rested on its utilisation of personal material about Stalin from the Russian archives made accessible after the fall of the Soviet Union – documentation disdained by historians more interested in Stalin’s politics and ideology than his private life.

In relation to the Romanovs’ private lives, Sebag Montefiore has at his disposal a vast mountain of material, which he uses to detail their every dalliance, affair and infatuation. Sir Lewis Namier said that good history consists of broad outlines and significant details. In this work, Sebag Montefiore’s significant detail is drowned by too much trivia while his broad historical picture of the country ruled by the Romanovs remains fuzzy.

The book is an account of the lives and loves of a dynasty rather than a history of the tsars, tsarism or Russia. At its core are the intrigues, conspiracies, betrayals, triumphs and disasters of the Romanov court. But the often whimsical nature of court politics makes it difficult to follow. Sebag Montefiore is an entertaining and colourful writer and does his best to unpack what is going on whilst juggling the multiple characters and shifting scenarios. But much of the book reads like a catalogue of plots and coups, with one damned episode of murder and mayhem after another, together with a litany of battles, campaigns, wars and peace treaties. So it comes as welcome relief when, on occasion, the author steps back from his detailed narrative to condense and summarise his researches.

Sebag Montefiore’s brand of popular history is narrative-driven and tends to shy away from analysis for fear of alienating some readers. As a narrative historian, I have no objection to telling stories. But a narrative with a little more analysis could have helped readers to digest the complex plots and subplots of the Romanov dynasty.

Pen portraits of main characters are another feature of Sebag Montefiore’s brand of history writing. Here he has a sprawling cast of characters who provide ample opportunity for entertaining and amusing sketches.

“Alexander III,” he writes, “was six feet three inches tall, pot-bellied and so strong that his party trick was to bend pokers and tear up packs of cards. He was the sort of Tsar who always knew who he was and what he wanted – no small qualities in a leader.”

Among his other memorable turns of phrase is this description of the 1814 Congress of Vienna: “Perhaps the most self-indulgent international junket of all history, a congress of two emperors, five kings, 209 reigning princes, about 20,000 officials, from marshals and ministers to clerks and spies and just about every gold-digger, mountebank and prostitute in Europe, maybe 100,000 in all, [who] bargained, blackmailed and fornicated their way through banquets and balls to reshape a continent after 20 years of war.”

The courtiers of the Romanovs feature almost as much as the tsars themselves. Perhaps the most famous of these was Grigory Rasputin, the charismatic religious mystic from Siberia who charmed his way into Nicholas II’s inner circle. As an effective faith healer, he was able stop the bleeding of the Tsar’s haemophiliac son, Alexei. But, as Sebag Montefiore points out, Rasputin was equally adept at tending to the affective needs of the tsar and his wife, Alexandra. In 1916, one of the last grisly episodes of the Romanovs’ reign was Rasputin’s murder by Russian patriots because of his supposedly malign influence on Alexandra, herself under suspicion because she had been born in Germany, a country now at war with Russia.

Yet for all the nefarious intrigues, the Romanovs’ game of thrones ended not with a bang but a whimper. In March 1917, the Petrograd garrison mutinied and joined a popular revolt in the city. Nicholas II, who was commanding troops at the front, lost control of his capital. To save the dynasty, and to preserve the Russian war effort, Nicholas abdicated in favour of his brother. Michael, however, refused to be king until after the election of a constituent assembly, and the dynasty fell.

Tsarist autocracy was succeeded by a provisional government tasked with establishing a democratic republic in Russia. Six months later it, too, was overthrown, by Lenin and the Bolsheviks. Then, in July 1918, Lenin authorised the execution of Nicholas and his family because he feared the Romanovs would become figureheads for a counter-revolution.

For devotees of royal history, this is a must-buy book. The only comprehensive history of the Romanovs, it is lavishly illustrated and amazingly good value. Those interested in the broader history of Russia will also find it interesting, though not as enlightening as it could have been.

Geoffrey Roberts is professor of history at University College Cork. His latest book is Stalin’s General: The Life of Georgy Zhukov