The Political Writings of Eva Gore-Booth: well worth recuperating

This book is a serious contribution to women’s, gender, labour and social history. Many of her writings are as relevant today as they were 100 years ago, writes Catriona Crowe 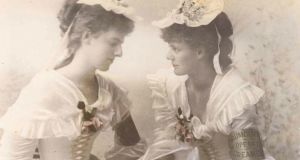 Eva Gore-Booth, sister of the more famous Constance Markievicz, has not had nearly as much attention as the rebel countess. Of WB Yeats’s “two girls in silk kimonos” at Lissadell House, in Co Sligo, Eva was the gazelle. She spent most of her life in England, dedicated to the campaign for female suffrage, the women’s trade-union movement, and pacifism in a highly militarised period. She had a lifelong female partner, Esther Roper, who was as interested and active in these causes as Eva.

Sonja Tiernan is engaged in recuperating Gore-Booth’s life and legacy, having produced a well-researched and illuminating first full biography, in 2012, Eva Gore-Booth: An Image of Such Politics. Now she has turned her energies to the extremely worthwhile project of editing Gore-Booth’s political writings. The provision of access to primary texts is invaluable, particularly when done with the mixture of scholarship and cultural attention Tiernan brings.

The book is laid out in three parts. The first is devoted to Gore-Booth’s writings on women’s suffrage and trade unionism, spanning 1903 to 1919; the second consists of her material on pacifism and conscientious objection, 1914-26; and the third her texts on Irish nationalism before independence, 1904-23. Concise introductions outline her positions and activities.

Gore-Booth connected most of her causes together by seeing all of them as human-rights issues: the lack of votes for women is connected with the powerlessness of women’s trade unions to improve their conditions, and war damages women and children disproportionately as civilians. Her campaigns, such as those to save the jobs of barmaids, which were to be abolished to preserve them from immoral surroundings and bad language, are a mixture of hard-headed practicality – she was an indefatigable lobbyist of parliament and a scourge of male trade unionists who wanted either to keep women out of the workforce altogether or to continue to pay them much less than themselves – and powerful, cogent, idealistic argument. She defended textile workers, female pit-brow workers, chainmakers and circus acrobats as well as barmaids. (That battle was won.) All of these groups emerge from her letters, pamphlets, articles and memoranda as real people.

Gore-Booth’s suffrage activities and writings are on the side of reform rather than militancy. She did not associate with the Pankhursts’ Women’s Social and Political Union; she described their 1907 “negative” electoral policy – voting against every government candidate, even those who supported female suffrage – as “a source of mingled amusement and exasperation to the voters”.

Gore-Booth, in contrast, was instrumental in causing Winston Churchill to lose a byelection in 1908, consigning him temporarily to limbo. The barmaids’ candidate won.

Her writings on pacifism, directly influenced by the outbreak of the first World War, raise the question of science as an integral part of mass destruction, and eloquently put the case for fighting against war rather than science: “Now it is no wild Utopian theory but a hard practical fact that those among us who think life worth preserving as in itself a good and beautiful thing, who have some kind of faith or interest in the human race, have only two courses open to them, to make war on science and to save ourselves through stupidity, or to make war on war. To try to stop the progress of science, as the churches found in the Middle Ages, is a desolate and hopeless enterprise, as it is making war on that progress and evolution which is an essential part of life itself. To stop scientific development and research, even in the interests of the survival of the race, is of course an absurd and impossible idea, and, if it were not, which of us would care to survive at the expense of our brains?”

She foresees the dangerous expansion of military science as a possible destroyer of the human race, almost as if she can hear Robert Oppenheimer’s famous self-accusation: “Now I am become Death, the Destroyer.”

She regularly visited conscription appeals tribunals, taking notes on the treatment of conscientious objectors and publishing excoriating pieces. One of her favourites was a young man who responded to the stock tribunal question “Why do you consider Christ was opposed to war?” by saying that “one can’t exactly picture Jesus Christ sticking a bayonet into a German soldier, or an English one either.” As the question was asked by a clergyman, this sealed his fate.

Gore-Booth’s writings about Ireland are a mixture of sisterly loyalty – she was close to Constance; they died within a year of each other – poetic justification of the 1916 Rising and defence of her friends Roger Casement and Francis Sheehy Skeffington. She was horrified by Constance’s death sentence, and came to Dublin on the day James Connolly was shot. She produced one of the first eye-witness accounts of Dublin after the Rising, with vivid descriptions of Mountjoy Gaol and Richmond Barracks. She was one of the prime movers behind the campaign to pardon Casement, although she does not deal with the circulation of his diaries, which ultimately defeated attempts to save him.

Her position on the Rising is difficult: as a pacifist she opposes violence; as a separatist she wishes for Irish independence and sees the Rising as the latest glorious attempt to break the connection with Britain.

Her experiences with Constance and Casement made her a lifelong opponent of the death penalty.

Gore-Booth’s writing has a curiously modern flavour – crisp, logical, anti-rhetorical. She argues her cases from first premises and patiently responds to her critics with kindly didactic intent. Her tone is trustworthy; she is so careful about providing accurate statistics and other evidence for her arguments that the reader is prepared to believe in her human-rights agenda as precisely that rather than as a partisan political position. Her eloquence is all the more effective for its restraint. One can see she must have been a powerful advocate for causes she espoused.

This book is a serious contribution to women’s, gender, labour and social history. Gore-Booth is well worth recuperating, and many of her writings are as relevant today as they were in the first decades of the 20th century.