The Mirror & the Light: A lavish processional; rich in perception, texture

Review: last of Hilary Mantel’s Wolf Hall series is perhaps half a million words; a good book is as long as it needs to be 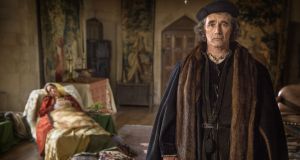 Anne Boleyn’s body is so slight that an elm arrow chest will suffice for a coffin. Her ladies lose their footing in her viscera as they carry the corpse to the chest and place her head by the feet. Too slight to bear the weight of accusation of incest with her dead brother George, or of cuckolding the king with five others who await execution in the Tower of London. Her real transgression is her failure to bear King Henry VIII’s heir, a betrayal in the flesh as grievous as as any heretic plot.

Thomas Cromwell is the second most powerful man in the kingdom. He administers the king’s estates. He intrigues with ambassadors, hands out benefices and taxes farms. As he consolidates the king’s confidence his thought circles back to those early chapters of Wolf Hall, the first meeting with the 15-year-old Thomas, beaten to a pulp by his father in the filth of a Putney midden.