The Maximalist review: how Tony O’Reilly maxed out on a luxury gambit

Matt Cooper’s thorough biography of Tony O’Reilly captures the Irish businessman’s flamboyant hard-headedness, though unlike him it is sometimes dull, says Olivia O’Leary 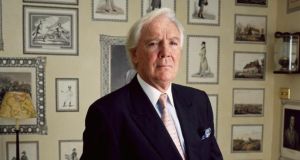 Book Title:
The Maximalist: The Rise and Fall of Tony O'Reilly

Walking into Tony O’Reilly’s house at 2 Fitzwilliam Square, I noticed the plaque beside the front door.

“So this was William Dargan’s house!” I said when I met him inside. “Michael Dargan,” he corrected me. “William” I insisted, because I knew. William Dargan, the great railway engineer, came from Carlow, like me; his biographer, Dr Fergus Mulligan, was my good friend. O’Reilly checked with one of his advisers, to be told quietly that I was right. I tried to make little of it, but his smile had turned wintry. Tony O’Reilly did not like to be wrong.

I remember the incident because it told me that this was a man who didn’t welcome inconvenient truths, even when they were written on a plaque outside his own front door. But I also remember it because I was disappointed. I liked O’Reilly and I still do, and he should have been bigger than that.

O’Reilly was a big man in so many ways. He asked me to be a director of the Ireland Funds, and for years I saw how he marketed Ireland as a place where there could be peace and prosperity, where the diaspora could play a proud and historic role. He used his influence, his charm and millions of his own money to pull in $500 million for Ireland from around the world. Much of it was used in reconciliation work in the North. Peace is a long road, and O’Reilly played his own part in trying to bring Ireland along it. He should be proud of that.

Perhaps only somebody like O’Reilly, who hardly ever had a private meal alone with his family, who entertained constantly, who networked with Nelson Mandela and Bill Clinton and lived all the time in the public eye, could have pulled the Ireland Funds together. But living the big-business company life has its drawbacks. It’s a form of institutionalisation. It cuts you off from real life. If everything is done for you, if all your meals are provided by caterers, you won’t know that people who cook their own meals and pack their own dishwashers prefer to eat casually, without the pomp and nuisance of crystal glasses and fine china dinner services.

O’Reilly’s love affair with Waterford Wedgwood was not shared by busy working women with families, a phenomenon that became common years after he had jetted into the corporate stratosphere. People like me, who had long ago packed away our bits of Waterford Glass, sat back, astonished, at O’Reilly’s determination to pour millions into products that so many of us saw as dust gatherers.

The story of Waterford Wedgwood is, for me, the most interesting part of Matt Cooper’s new book – much more interesting than the fight with Denis O’Brien over Independent News & Media. It is, in classical terms, tragic: the hero beaten, not by a younger, financially stronger foe but by a fatal flaw in his own make-up.

O’Reilly’s weakness was that he fell in love with a product. His dream was of an international luxury brand with a link to Ireland. It blinded him to reality – so much so that, in a last-minute bid to stave off receivership, he tried to get the minister for finance at the time, Brian Lenihan (like him an old Belvederian), to agree to give Irish government backing to loans for Waterford Wedgwood.

O’Reilly and those around him truly believed the Irish government would support a chronically loss-making luxury-goods company – in late 2008, at a time when the same government had just given a blanket bank guarantee and had introduced an emergency budget. It was, as the minister for enterprise at the time, Micheál Martin, remembers, “naive and desperate”.

Between 1990 and 2009 O’Reilly and his brother-in-law, Peter Goulandris, pumped €579 million of their own money into Waterford Wedgwood. Of that investment, €400 million was made between 2005 and 2009, in an effort to stave off collapse. It was an enormous gamble that left O’Reilly unable to defend himself, Cooper says, when he came under attack from O’Brien at Independent News & Media.

All the details of that fight for INM control, details of shares and percentages and borrowing and sales of assets, are there in the book for those who want them. The bottom line is that O’Brien won because he was able to come up with more money.

Two of the criticisms O’Brien made of O’Reilly – that he was old-fashioned and that he surrounded himself with cronies – are worth looking at. Cooper comes up with plenty of evidence that O’Reilly kept his friends too close and that this meant he was often dangerously short of healthy opposition. Too often the boards of his companies were full of his family and friends. Cooper claims that O’Reilly did much better as chairman of Eircom, which was composed of people who were more independent.

As for his being old style, that was certainly a factor in his approach to the Waterford Wedgwood products and in his failure to look away from the US and explore Asia, where a newly emerging middle class would be more likely to provide a market for these luxury goods. O’Reilly was, as his friend Redmond O’Donoghue put it, mannerly – both personally and in the conduct of his business.

Maybe that’s old fashioned. O’Brien accused him of not keeping up with the internet age at Independent News & Media. O’Reilly loved actual newspapers and print, and believed they had a future. I’m with him on that, but then perhaps I could be accused of being old fashioned as well.

As for his role as a proprietor, there is little doubt that O’Reilly’s Irish editors were made aware of what he wanted, even if he didn’t intervene directly. With the London Independent he didn’t interfere. When the paper and its Middle East correspondent, Robert Fisk, criticised the invasion of Iraq in 2003, O’Reilly, though he supported the invasion, defended the paper’s right to decide its own editorial line.

O’Reilly was proud of the London Independent and defended the money he put into it because it was INM’s “calling card”. Still, you have to question his commitment to quality journalism. Quality journalism costs a lot of money.With the London paper, as with the Sunday Tribune, says Cooper (a former Sunday Tribune editor), O’Reilly simply did not fund them adequately.

Tony O’Reilly has lived a long life, and The Maximalist is a long book,with lots of interesting information. It needed better editing. There’s some repetition in the 564 pages, and parts of it read like rather long business articles.

There are some gems. Like the description of O’Reilly staying out of sight in the minibus four years ago when his wife brought Queen Elizabeth II on a tour of the Irish National Stud. It may be that he didn’t want to upstage Chryss Goulandris on her big day as chair of the stud. Still, you feel that 10 years earlier O’Reilly would not have remained in the back of the bus.

It would be sad to think that O’Reilly defined himself so much by business success that he would now define himself only by business failure, by the loss of money and influence. Life is about so much more than that, as those of us who have got older realise. I hope O’Reilly accepts that, too, but we don’t know, because there’s no sign here that he gave a current interview to Cooper. As a result some passages in this otherwise interesting book are dull.

Which is a pity. Tony O’Reilly could be vain, overbearing, plain wrong. But he was never dull.

Olivia O’Leary is a writer and broadcaster. She does a Tuesday political column for Drivetime, on RTÉ Radio 1