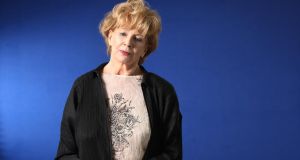 Edna O’Brien’s first book, The Country Girls, was published in 1960. A fresh, meticulously observed coming-of-age novel, it became a bestseller in the UK, was banned and reviled in Ireland, and is now firmly established as a classic. Last month O’Brien was made a Saoi of Aosdána, the highest honour the State can pay an artist. A circle has closed.

Since her stormy debut she has published many wonderful novels and short stories, as well as some nonfiction and plays. She is among the most industrious and prolific of Irish literary writers. The Little Red Chairs is her 24th book. It is her most ambitious.

O’Brien is a very gifted novelist, with a talent for creating memorably quirky characters and entertaining stories while analysing the depths and contradictions of human emotion and behaviour with surgical precision. Her most distinctive talents are her astonishingly acute powers of observation and her ability to describe in the most simple and appropriate words people, things and places, which gives her writing its uniquely beautiful texture – rich, sensuous, alive and colourful as a medieval tapestry: “Once a month they drove to Strand Hill and sat on the bench facing the rocks that looked as if they would growl, the waves pounding in and the surfers in black, with the stealth of seals, far out, seen and not seen in the troughs of the waves.”

Place is significant in all of O’Brien’s work, much of which is located in the west of Ireland – Clare – or in London. Here, Sligo is the general area, the fictional town of Cloonoila the principal location. It has a familiar cast of amusing characters: the foul-mouthed, good-humoured publican, the nosy postmistress, the rather clodhopping garda, a lively hotelier, a nice nun, and a beautiful, sad, somewhat unhappily married woman, Fidelma, the main protagonist.

A stranger comes to town, a traveller from the eastern world, upsetting the equilibrium and relieving the boredom of the sleepy town. He is Dr Vladimir Dragan, or Vuk, a healer and sex therapist from Montenegro: handsome, articulate, intelligent and mysterious. In spite of opposition from the parish priest, Vlad quickly establishes himself in the village. He has the charisma of a guru, and many of Cloonoila’s women find his medical attentions almost magically beneficial. Fidelma, the local beauty, asks for help with fertility problems and, in the course of solving them in the most natural way of all, falls in love with the mysterious stranger from the Balkans.

The unveiling of Vlad occurs about halfway through the novel, after which the initially leisurely narrative speeds up dramatically. The consequences of the identification have global significance – and horrific consequences for Fidelma. As often in O’Brien’s novels, an Irish country community punishes and expels a woman who has broken the tribal rules of sexual behaviour.

But Fidelma’s ordeal is half the story, complemented by Vlad’s and her own exploration of the bigger questions relating to war, man’s cruelty to man, and the baffling strangeness of human nature. The “little red chairs” of the novel’s title are the 11,541 plastic seats laid out on Sarajevo’s main street, in 2012, to commemorate the dead of the siege of the city 20 years earlier. Among the 11,541 were 643 children.

So O’Brien deals with one of the great disasters of recent European history. Far from being parochial, the book has a global reach, and handles with sensitivity and deep insight the problem of evil. Her ambition to extend herself beyond the domestic and the personal, central as that is to all good fiction, is remarkable. As a writer matures, the wish to do more, to reach farther, to deal with the bigger political picture, is almost natural. It takes hard research, hard work and great skill to fulfil the desire to do something big. Edna O’Brien has achieved the goal.

The second part of the novel moves from Cloonoila to the spiky London of immigrants and then to the United Nations International Criminal Tribunal for the Former Yugoslavia (also not directly named), in The Hague. Fidelma describes simply and harrowingly Vlad’s trial: “Then calmly and sedulously [the prosecutor] summarised events beginning in 1992, when Bosnian Muslims and Bosnian Croatian communities were terrorised and destroyed, carnage that the world would come to know of in time. He enumerated the thousands of civilians arrested, brutalised, killed, the tens of thousands uprooted by force, the hundreds of thousands besieged for months, years, killing sprees, cyclones of revenge, detainees held in dreadful places of detention and hundreds executed.”

It is a long way from the little waves of Breffny. But it is O’Brien’s skill in demonstrating the contrast between beauty and ugliness, peace and war, kindness and brutality that gives this novel its power. Above all, the duality within one charismatic individual clearly fascinates her: how can Vladimir Dragan, of the attractive physique and beguiling personality, with his druidic healing skills and poetic sensibility, be the man who murdered 11,541 Bosnians? This is the central conundrum of the novel.

Naturally it exercises Fidelma, who has to ask herself how and why she fell in love with the Butcher of Sarajevo. As this is fiction she has an opportunity to put the question to Vlad, in a final interview in his prison cell. Folklore, in the form of a pishogue – possibly Irish, although it’s not one I’ve come across – and some wise lines from Shakespeare provide as good an explanation as we may find for the problem of evil – but, of course, they don’t furnish a solution.

There is much to think about in this rich, searching and enthralling book, a novel of ideas as well as emotions, and arguably one of the most interesting and ambitious ever written by an Irish author.

Éilís Ní Dhuibhne’s latest stories appear in A Kind of Compass, edited by Belinda McKeon, and The Long Gaze Back, edited by Sinéad Gleeson