The Irishman who led one of WWII’s greatest escapes

Maj-Gen Adrian Carton de Wiart VC, half-Irish, half-Belgian, was 62, missing a hand and sporting an eyepatch when he led an escape from Italy’s Colditz 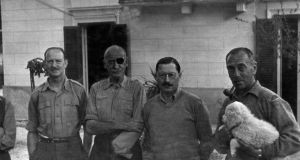 “We’re going to have to ditch, sir, prepare for a landing on water!” was the last thing that the “Unkillable Soldier” Major-General Adrian Carton de Wiart VC heard from the cockpit of the Wellington bomber that was supposed to be taking him to Yugoslavia.

De Wiart, the product of the union of a Belgian aristocratic lawyer and an Irish mother, had been furiously attempting to struggle into a parachute harness, a stream of expletives flowing from beneath his fierce salt-and-pepper moustache, when the call came through his headphones. He was relieved, as he didn’t think that he could have squeezed his very tall frame through the small escape hatch set into the bomber’s belly and parachuted clear.

De Wiart used his one hand to grip his seat tightly. His other hand was missing, just one of 13 wounds that the eyepatch-wearing general had suffered in a career that went back to the Boer War. His journey had just taken a very bad turn for the worse when the plane’s second engine had inexplicable spluttered and died.

On his way from England to Yugoslavia, the 62-year-old had just been personally appointed by Churchill to head the British military mission there. Travelling by air via Malta, de Wiart’s plane had been headed for Egypt before planning to turn north for Yugoslavia when the emergency had struck. Both engines had inexplicably died, De Wiart suspecting sabotage. De Wiart, disabled and elderly and who had said of the first World War (a campaign in which he had been shot eight times!) “Frankly, I enjoyed the war”, survived the ditching, being knocked unconscious. Coming to, he helped one of the injured aircrew swim a mile to shore before being captured by the Italians. And the madcap De Wiart, model for Evelyn Waugh’s Brigadier Ben Ritchie-Hook, wasn’t the only high-profile prisoner to fall into Mussolini’s hands in 1940-41.

The desert campaign had taken a dramatic turn for the worse with the entry of Erwin Rommel and the Afrika Corps. In a sweeping counteroffensive, the Desert Fox had defeated the British, capturing thousands, including a host of generals and brigadiers who were destined to be held captive in a huge mediaeval castle in Tuscany. Perhaps the most famous was Lieutenant-General Sir Richard O’Connor, another half-Irish daredevil who in an earlier desert campaign had taken 150,000 Italians prisoner and almost kicked Mussolini out of North Africa.

O’Connor, whose father had been a major in the Royal Irish Fusiliers, was captured alongside his successor as Western Desert Force commander, Lieutenant-General Sir Philip Neame, who held the extraordinary record of winning both a Victoria Cross and an Olympic gold medal. In total, Mussolini assembled 13 of Britain’s highest-ranking captives and shipped them off to Vincigliata Castle outside Florence, where O’Connor and De Wiart were among the most determined escapers.

The middle-aged and elderly prisoners tried everything to escape to Switzerland, just 200 tantalising miles to the north, including precisely-timed wall escalades using home-made rope (O’Connor’s speciality), piercing the great walls with carefully concealed holes and even climbing down a deep mediaeval well until settling upon the hardest task of all – digging a 60ft tunnel through solid bedrock. This latter attempt took the generals seven months’ excruciatingly backbreaking labour, with De Wiart organising an elaborate system of watchers and warnings as the teams burrowed deeper. Simultaneously, the prisoners managed to contact London via secret letters smuggled out for them at enormous personal risk by the “Scarlet Pimpernel of the Vatican”, Monsignor Hugh O’Flaherty, who in defiance of the Pope did everything he could to aid prisoners-of-war right under the noses of the enemy.

Another brave Irishman, a young redheaded RAF observer named Sergeant Ronald Bain, ably assisted the generals. Bain had been shot down in Libya and brought to the castle along with a dozen other-ranks prisoners to act as orderlies to the elderly gentleman prisoners. But Bain’s prewar electrician’s skills were in high demand, and he rigged illicit lights, organised a system of electric warning buzzers and helped make escape equipment.

Among the generals, a surprising number had previously unknown skills, including carpentry, metalworking and tailoring. But one of the most invaluable was Major-General Michael Gambier-Parry, who hailed from a famous artistic family. Having inherited artistic talent, he became the castle’s forger, manufacturing perfect copies of Italian identity documents and escape maps.

Working together, the generals completed their massive tunnel excavation in March 1943. Six, in three teams of two, escaped later that month. Four risked the Italian railways, while De Wiart and O’Connor walked, sleeping rough each night and relying on the kindness of strangers in a bid for Switzerland. They struggled on through rain and cold, hunted by the Italian army and police, short of food but never of guts. O’Connor, a small wiry 55-year-old, with silver hair and a white moustache helping along the 6ft 2in De Wiart, 63 years old, with a black eye patch and missing left hand that had earned him the nickname “Long John Silver” from the castle’s young orderlies, both incongruously dressed as Italian peasants. Not for them, or the other esteemed escapers, a comfortable chair beside a roaring fire and a cup of cocoa, instead this band of eccentrics in their twilight years proved to be some of the most determined and imaginative escapers of the second World War.
Castle of the Eagles: Escape from Mussolini’s Colditz by Mark Felton (Icon books) is out now in hardback, at £16.99. Felton has written 20 books on World War Two, including Zero Night and The Sea Devils. Zero Night and Castle of the Eagles are both being developed into feature films in Hollywood