The Guyliner: Rebecca is my favourite novel, so why do I hate everyone in it?

Mrs Danvers is a pretty watered-down school bully. Her obsessions, after all, are a hairbrush and a dead woman’s nightgown – Cruella de Vil or Maleficent she is not 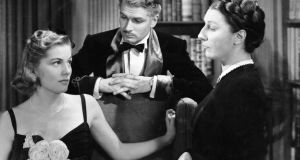 We often hear, in critiques of books and movies, that characters are “unlikable” or “unrelatable”. You can almost hear reviewers squirming in their seat as they desperately search for some scrap of positivity or understanding to latch on to. It’s the mistaken belief you have to like everybody involved, or understand them, otherwise you can’t enjoy yourself. Well, as anyone who’s agreed to come home with me after a date can tell you, you can still hate someone and have a perfectly good time.

As iconic opening lines go, “Last night I dreamt I went to Manderley again” is right up there with “It was the best of times, it was the worst of times” and “Life is a mystery, everyone must stand alone”. Rebecca is Daphne du Maurier’s masterpiece, a dark and twisting romance which manages to be both utterly predictable and hugely suspenseful.

For the uninitiated, it’s the tale of a lonely widower, who is said to be traumatised by the death a year previously of his beautiful wife in a boating accident, as told through the eyes of the young, nervous woman who becomes the successor to his affections. Once the shy bride moves into her new marital home, she becomes obsessed with the dead wife, and it’s this preoccupation that drives the story, as she tries to find out more about her husband’s first love. Until… the big twist, which comes, as all twists do, about two thirds of the way in. If you think you might read it one day, don’t read on – I’m not sparing the horses when it comes to spoilers.

I first came to read Rebecca fairly late, at the back end of my teens. ITV were to screen a new adaptation of it – which, all these years later, I still haven’t seen – and I was so fascinated by the story and its reputation that I sought it out. I wasn’t disappointed. I have a terrible habit for rereading books and along with my childhood favourites, Rebecca charts highly as one I’ve revisited the most.

Not even the execrable 1940 movie adaptation could dampen my ardour. Laurence Olivier stomping stiffly from room to room in Manderley like a sentient wardrobe and, the cardinal sin, the method of Rebecca’s demise changed to make Maxim blameless. Joan Fontaine does a reasonably good job just standing about as the milquetoast Mrs de Winter, and got an Oscar for her trouble, but the characters are definitely best left on the page.

Despite its cold elegance and rich language, Rebecca’s plot is unashamedly soapy and suspenseful and my weakness for high drama and borderline campery means it ticks all my boxes. I adore it.

And yet. Despite my gushing testimonial, I have one issue with Rebecca. A small thing. Insignificant, really. It’s… well, it’s the entire cast of characters. I hate them all. Every single one. Well, except one, and she barely says a word, despite the title of the book bearing her name.

It’s testament to Daphne du Maurier’s skill that she can pack a novel with people who, if you found your name next to theirs on a wedding seating plan, you would break your neck getting to the table before them to switch place-cards, and still make it worth reading.

Could there be a romantic hero less appealing than the boring, snappy droid that is Maxim de Winter? You can tell his nameless second wife hasn’t done much dating, as she inexplicably falls head over heels for someone who sulks at mealtimes and treats everyone who ever speaks to him as a minor irritation, a fly he hasn’t time to swot away. The excuse is he’s overcome by grief – which turns out to be guilt when all the wife-murdering comes out – but I think this is just his “personality”.

Can you imagine trudging round Manderley with Maxim and his slobbering dogs, waiting for him to speak to you? It’s little wonder Rebecca had a secret sex cabin and would hotfoot it to London to drown in cocktails at every opportunity.

The real reason Max never talks about Rebecca? He’s not cut up about her death or worried his secret will come out – he’s terrified once he starts describing this fun-loving, raucous, duplicitous goddess, you’ll wish you’d met her first instead.

Picture Max on Tinder, looking for his Rebecca replacement. What would his bio say? “Looking for a woman who’s no fun, doesn’t smoke, dresses badly, is low-key, has no friends, and won’t realise I’m an inadequate man-baby”, perhaps. You’d think he’d have no luck finding such a dullard, but hold your horses, here she comes.

Du Maurier is of course very clever to deny the second Mrs de Winter a name, as it demonstrates absent Rebecca’s domination, especially over Manderley itself. I do like to imagine Daphne based her on the most boring, twee, mousy woman she’d ever met – so dull she couldn’t even remember her name. She is, however, all of us, really. We like to think we’d stand up to servants, tell Maxim’s sister to bore off, and start frittering away the de Winter millions like a lotto winner in Harrods, but the truth is we’d sit there overwhelmed, biting our lip, letting it happen. The world has too few Rebeccas and far too many Mrs de Winters – perhaps that’s not such a bad thing. If Rebecca de Winter were alive now, she’d probably be heading up a reality show.

Frank, Maxim’s sidekick, who’s such a relentlessly dull virgin he goes into paroxysms of anxiety when Rebecca puts her hand on his knee, should’ve just gone for it really. He’s never going to get with the true object of his affections – that’s Maxim by the way – but he could have at least had a nice “shoes and champers” shopping trip with Rebecca.

Mrs Danvers shows promise, especially when she sets Mrs de Winter up with the controversial costume at the fancy dress party, but she’s a pretty watered-down school bully. Her obsessions, after all, are a hairbrush and a dead woman’s nightgown – Cruella de Vil or Maleficent she is not.

Jack Favell barely registers – with every word he says, you can feel the long-dead Rebecca rolling her eyes all the way from the bottom of the ocean. He drinks too much, questions authority with all the grace of a schoolboy having his prefect badge taken away and is convinced he’s irresistible to women. He’s your least favourite uncle at a wedding.

So why do I adore the book, yet hate them all? Well, I don’t really – but next to Rebecca, they can’t possibly compete for my affections. Just like in life, they’re bit-part players without realising.

The book isn’t about Maxim, or Mrs Danvers, or the second Mrs de Winter dithering over the lunch menu – it belongs to Rebecca. We’re told tantalisingly little about her, until much later on when Maxim’s coming up with his glib excuses for why he shot her, and with each detail missed, her presence grows and grows. By the time she does show up, a load of old bones in the hull of her wrecked boat Je Reviens, she has a stranglehold on each scene; almost every character driven to the point of madness by the fact she ever existed.

I remember reading Rebecca for the first time and feeling a mixture of sadness and joy that, freed from the burden of guilt over Rebecca’s death, the de Winters would be able to start over, that the second wife could finally exert her authority over Manderley and enjoy her new life. I was dying to see how it turned out.

But while it felt the right conclusion, passionate, gregarious Rebecca whispered in my ear the whole time: “Yes, I totally set Maxim up, but don’t you think it would be a terrible shame if they got away with it entirely?”

Thank heavens then, that Mrs Danvers got busy with the matches and sent Manderley up in smoke – every burning ember a tribute to the real star of the show.

If you want to be the most talked-about person at a party, don’t come. So maybe I don’t hate the other characters after all, I just pity them – without Rebecca in their lives, they’re nothing.

The Guyliner is a writer and editor from London. He writes about dating and gives relationship advice to readers of Gay Times magazine.