The Golden Legend review: creation and destruction in Pakistan 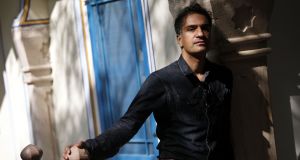 Nadeem Aslam: his language makes one engage with every word. Photograph: M Zhazo/Hindustan Times via Getty

It was a marriage of minds – Massud and Nargis, both architects. He is a sensitive dreamer, distressed by the pain of others; she is a resilient survivor. Her life has been based on one small deception. They share a love of beauty expressed through mutual devotion and the buildings they create.

The Golden Legend, the opulent and dramatic fifth novel by the Pakistan-born, London-based writer Nadeem Aslam, begins on a morning when the couple are about to join in an informal celebration. In reality it is a communal task, the transferral of sacred texts from an old library to a new one that they have designed. The books are to be passed, from hand to hand, along a mile-long route. It is a marvellous image, characteristic of the visual allure that Aslam consistently brings to his art.

Yet chance intervenes in the form of an American who launches what appears to be a terrorist attack in this fictional Pakistani city. Several people are killed, including several bystanders. Efforts are made to cover up the incident, the US government insists the man is a diplomat, even the president makes a plea, and the openly corrupt Pakistani police set out to threaten the grieving relatives into “forgiving” the American in exchange for cash settlements and, ultimately, US citizenship.

From the outset of an overwhelmingly political novel that will undoubtedly be a Man Booker contender, Aslam, whose exciting work includes Maps for Lost Lovers (2004), The Wasted Vigil (2008) and The Blind Man’s Garden (2013), juxtaposes the beauty of tradition with the violence and menace of a world gone mad.

Massud awakes to the call of the predawn prayer. “He imagined the worshippers approaching the eighteenth-century mosque in silence, some of them carrying lanterns. The sight of empty shoes at the thresholds of mosques had always made him think that the men had been transformed into pure spirit just before entering.”

In Massud Aslam has created a character who, having been born into privilege and a life of the mind, has continued to live through his intellect. For his wife it was different; she discovered grief at an early age.

Now in their 50s, they live in a beautiful, sun-filled space that they have created in a former paper factory, and they have surrounded themselves with choice objects, such as “a metal helmet for a stallion from the times of the Crusades . . . and the vertebrae of a whale from a bay in Antarctica”.

Two elaborate model mosques, used as private reading spaces in a large book-lined room, are hoisted up and down according to the season.

It all seems a bit precious: “Numerous pairs of bird wings were hanging from nails driven into the far wall of the kitchen.” It is an obvious repetition of the image of the ceiling described in Aslam’s finest work, The Wasted Vigil, into which hundreds of books were held in place by iron nails.

This couple exists at a remove and can drop everything to research Tolstoy’s reaction to Pushkin’s death in 1837 – when Tolstoy was nine. They have no children but have educated Helen, the daughter of their servants, as if she were their own. At 19 the girl has already angered the authorities with articles that have been published in the local newspaper. Her mother, Grace, had been brutally murdered, and Helen lives with her father, whose name is Lily.

Plot is little more than a minor irrelevance to Aslam, an innate literary stylist with a finely honed visual sensibility whose interest is dictated by the individual responses of his characters to the violence of Islamism. As will be expected, The Golden Legend is gracefully poised and rich in symbolism, anecdotes and passing references to mythology, history and, of course, the Koran.

Among the most memorable devices is a great book of wisdom, gathered by Massud’s father. It is damaged by a vindictive interrogator yet is lovingly repaired, mainly by Nargis, using golden thread. When a sanctuary is found on the island where Massud and Nargis created a mosque that became tainted by vicious attacks, it is impossible not to think of Prospero’s island.

Aslam is a romantic whose intent is polemical, and he has an almost Shakespearean feel for violence as well as a grasp of the ongoing terrorism committed across Pakistan, India and Kashmir in the name of religion.

Pakistan is represented as a terrified and terrifying place in which the slightest word or gesture will be seen as blasphemous and the only outcome is death. Beatings and killings fill the pages, as do abuse, rage and hatred.

The attitude to women is appalling, and although it is noticeable that Aslam has created independent woman characters in this novel, they are treated terribly; Nargis is insulted in her home, a young girl is raped more than 30 times in one attack, and the mother of Imran, a young Kashmiri terrorist in training, was so badly beaten when she was pregnant with him that he was born with a broken arm.

Information often overshadows the fictional narrative, but then the reality is immense: “The mass graves of Kashmiris, who had been killed and buried in secret by Indian soldiers, were beginning to be discovered by then, and thousands of young men were missing – either murdered or crossing the border into Pakistan for guerrilla training.”

Suicide bombers intent on avenging insults to their Islamist beliefs fill the pages. Yet somehow Aslam’s languid prose sustains moments and images of seductive eloquence. The account of a dead soul’s odyssey following an escape attempt through the sewers is breathtaking.

That said, his prose for all its lyricism is at times stiff, overly formal, even awkward; a dying man gazes at his wife’s face “as though absorbing her details for the last time”. Elsewhere Helen looks up from her work “to gather or refine her thoughts”. Helen decides to draw her lover as he sleeps: “She moved with skill, the mind combining its existence with the hand.”

Aslam's word choice can also be archaic: using the Elizabethan "miscreant" instead of "terrorist" or "suicide bomber" jars, whereas a suicide bomber is referred to as having “exploded himself”.

It is an important novel of death, cruelty, injustice, atrocities and righteous anger.

The novel should have a closer copy edit, but this is because Aslam is such a gifted writer. The delicate physicality of his language makes one engage with every word; you read his books but also see them: he demands an almost surreal level of engagement.

Bodies are broken and smashed. A little boy loses both of his legs in an explosion but assures his new friends at school that “the real reason for my missing legs is that I had wings growing on my ankles and was able to fly”. He had to hide them for a while, because a jealous sorcerer wanted them.

There are irritants – flat dialogue and perhaps too much symbolism. Even so, this urgent, undeniably passionate and wayward novel convinces through the sheer cumulative force of its intent and a random array of dazzling anecdotes and historical references, which help deflect the brutalities of religious fanaticism at its most unforgiving.

Eileen Battersby is Literary Correspondent. Her debut novel, Teethmarks On My Tongue, is published by Dalkey Archive Press

Rob Delaney: Could I feel what they were doing when I had my vasectomy? Yes
4