The F word: Failure is theme of this weekend’s Children’s Books Ireland conference

Eoin Colfer, the new Laureate na nOg, to give his first public address 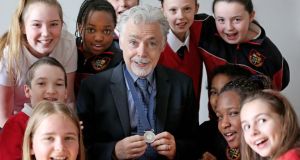 Students from Rutland National School, Dublin with Eoin Colfer, the new Laureate na Óg, who who will give his first public address as part of the conference. Photograph: maxwells

Probably the most significant event for adults interested in children’s books in the country, the 24th Children’s Books Ireland annual conference offers a packed two-day programme of conversation and debate this Saturday and Sunday, May 24th and 25th, at the Light House Cinema, Smithfield, Dublin.

Speakers will travel from all over Ireland and from Britain, Germany and the US to discuss, among themselves and with speakers, innovative ways in which books and reading can be part of young people’s lives.

The F Word: Failure is this year’s theme, with speakers invited to reflect on times in their careers where things have fallen apart, deadlines went out the window and defeat was snatched from the jaws of victory. Rather than revel in what didn’t work, CBI is asking how failure can be learned from and used to create something better. The weekend will be opened by Eoin Colfer, Ireland’s third Laureate na nÓg, who will give his first public address as part of the conference.

This year’s line-up includes famous names and new talents, including illustrators such as David Roberts, whose Dirty Bertie books will be familiar to many, and David Mackintosh, whose illustration of a boy mowing loop-the-loops into a lawn is used on our conference poster to reflect our theme of failure, and show that making mistakes often leads to moments of beautiful creativity.

Steve Simpson’s distinctive style can be seen not only in picturebooks books published by Connemara-based Futa Fata, but on bottles of Mic’s Chilli and the walls of Tuzo Mexican Kitchen in Dublin. He’ll be talking about whether winning awards equals success with Kirsten Reinhardt, whose debut novel Fennymore and the Brumella has been translated and published by Dublin-based Little Island books, and Jane Mitchell, winner of the Bisto Children’s Choice award for her novel Chalkline.

Our speakers span picturebook makers for the very young to authors of historical and realistic fiction for young adults. Brian Conaghan’s When Mr Dog Bites, a book about a boy with Tourette’s syndrome, sparked discussions about how much is too much for young readers. Irish Times columnist Robert Dunbar will be asking him about failure, success and breaking the rules.

The CBI conference aims to inspire, stimulate and enthuse delegates by inviting people whose work excites us to come and talk about what they do. There is a professional development element to the conference – booksellers, librarians, teachers, publishers, authors, illustrators and students come every year to learn. But for parents, readers and lovers of books, the weekend is a playground, an opportunity to meet like-minded people and to hear from some of the creators behind the books they love, or love to read to their children.

With comedy and warmth, Leslie Patricelli’s books for very small children celebrate the everyday and are perfect for reading aloud with all the family. Leslie will talk about the challenges and pitfalls of writing and illustrating for the very young.

Former festival director, playwright, teacher and Irish language author of many books for young readers talks about her varied career and reflects upon enjoyable failures along the way.

Graphic designer, art director and illustrator David Mackintosh says his picturebook style is ‘two drops understatement, three fingers foolishness, a dash of clarity.’ David will speak about how foolishness adds to the mix.

One of the keys to making a book a success is getting it past the gatekeepers of children’s reading and into the hands of its intended audience. With When Mister Dog Bites, Brian Conaghan has set himself quite a task on this front with a protagonist living with Tourette’s Syndrome. Brian will talk about failing and succeeding as a writer and making the decision to throw the rulebook out the window.

A graduate of The Brit School of Performing Arts, Laura Dockrill has been a Times Talent to Watch and voted one of Elle magazine’s top 20 faces to look out for. The successful performance poet, illustrator and children’s books author will talk about overcoming the fear of failure.

Author of Code Name Verity, Rose Under Fire and a variety of other historical novels, Elizabeth Wein’s first novel was published in 1993 but it wasn’t until 2012 that her work began to be noticed. She will talk about the stresses and pleasures of writing in this genre as well as the importance of approaching writing from a healthy and realistic perspective.

The former fashion illustrator and milliner turned children’s books illustrator David Roberts was originally turned down by every artists agent in London before being picked up in 1996. He has since gone on to illustrate over 70 books including the delightfully repugnant Dirty Bertie.