Thatcher’s Spy: MI5’s man in Sinn Féin looks back over his shoulder

While it cannot escape its own agenda, Carlin’s story conveys a sense of tragedy and betrayal 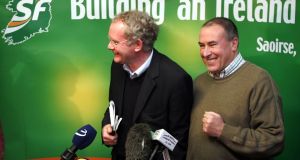 Willie Carlin’s observations, particularly on key figures such as Mitchel McLaughlin, right, whom he rates as a supreme political and electoral strategist, and Martin McGuinness are razor sharp and intimate. Photograph: Eric Luke

History is, in many ways, a series of stories. Historical perspectives depend on who is telling the story, and on who is hearing it. Willie Carlin, the MI5 agent who worked within Sinn Féin in the 1970s and 1980s for the benefit of Margaret Thatcher’s government, is telling this particular story, and he tells it well, insofar as a story of troubled times can ever be well told.

Billed as a real-life tale of espionage worthy of John le Carré where the Cold War meets Northern Ireland’s so-called “Dirty” War, Thatcher’s Spy details Carlin’s existence in two worlds; the covert world of MI5 and the political and paramilitary realities of Sinn Féin and the IRA.

Carlin grew up in a working-class republican family in Derry but swam against the cultural tide of his peers and followed his father into the ranks of the British army in the 1960s. In the early 1970s, he made his return to his home city after numerous postings abroad, and was quickly embroiled in the conflict and chaos ravaging not only the city but the lives of his family, his friends and the wider Derry community.

Carlin left the army in 1974 following the tragic loss of his first child to cot death. He has spoken candidly in interviews about the painstaking process of certifying his resignation from the British army with the IRA, and the steps that had to be taken to ensure that he would suffer no consequences for having joined in the first place. This period in his life and the life of his family was marked by tragedy as he and his wife Mary lost twin babies, who died shortly after birth.

But in a twist worthy of one of those aforementioned le Carré novels, Carlin was recruited into MI5, the British domestic security agency, by a regime that was desperate for reliable political intelligence on the republican movement.

Carlin found himself working as an agent within the Force Research Unit or FRU in 1974, a covert British army unit whose agents were tasked with infiltrating paramilitary organisations. In interviews and throughout his memoir, Carlin maintains that the mandate of the FRU was to redirect loyalist killing gangs away from sectarian civilian killings and towards the more “legitimate” targets republican activists represented.

At the time, according to Carlin, the British government was supplying those loyalist gangs with training and key information which was used to murder civilians in the Republic. Carlin has remained consistent in his revelations, citing specific details of incidents including the 1975 killing of John Francis Green in Monaghan and the Dublin and Monaghan bombings in 1974.

Carlin’s tone and delivery is measured and economical throughout this stark, uncompromising memoir; placing an emphasis on detail, he presents the reader with an account of his work, providing both personal and political context in a direct address that is as compelling as it is unsettling.

His observations, particularly on key figures such as Mitchel McLaughlin, whom he rates as a supreme political and electoral strategist, and Martin McGuinness are razor sharp and intimate, offering the reader what is essentially an insider’s perspective on Sinn Féin and its key members as the conflict began to escalate.

A memoir such as this cannot possibly hope to escape its own agenda but Carlin is always willing to acknowledge this. Across numerous television and radio interviews since the book’s publication, the former spy has proved himself an articulate and reflective subject, a figure seemingly unafraid of hard and pointed questioning.

Ultimately, his life, his actions and the personal consequences he endures because of them stand as yet another triptych to the extraordinary times in which the people of Northern Ireland were forced to make their lives during the Troubles. He dedicates the memoir to all the men, women and children of Derry who lost their lives during the Troubles, and to all those who strove for peace, both openly and behind the scenes.

If nothing else, Carlin’s story leaves the reader with a sense of the tragedy of those times and of the ways in which humanity, peace and the common bonds of community were betrayed against again and again, in political, physical and spiritual terms.

Once a country and western singer, Carlin now lives in a secret address in Britain, constantly looking over his shoulder for an assassination attempt that he still believes will come. In a way, though his cover was blown long ago, he still lives the life of an active spy, seeing potential danger around every corner. He was unable to attend the funerals of two of his adult children in recent times, and while he insists that his sole purpose during his time in MI5 was to make the lives of the people of Derry better, he seems resigned, within these pages at least, to the idea that the cost for many who suffered in the Troubles was just too high.

The closing chapter of the memoir is entitled “Haunted by the Past”. Under the shadow of Brexit, it will be clear to anyone who reads Carlin’s story that he is not the only one haunted by those days, nor is he the only one living out the consequences of his own and others’ actions.